You know things are getting dire on Mistresses when I’m referencing an Ariana Grande song title in my headline.

I mean, give me Jody Watley or Haley Reinhart or Beyoncé all day, every day. But the High Priestess of the High Pony? Eh. You can leave her discs in the 99 cent bin next to the supermarket checkout aisle, for all I care.

That said, when Little Miss Grande’s notorious crimes against donuts (click here if you have no idea what I’m rambling on about) pop up in my favorite soap-opera — much like a “ripped from the headlines” arc on Law & Order: SVU — is it any wonder that your trusty recapper needs a paragraph (or four) to get into the rhythm?

Joss’ popstar protégé Stacey North — with her Bagel-gate mess — isn’t the only lawless lady on this week’s installment, either. Karen’s got a possible stalker that could have her faking her own drowning (a la Julia Roberts in Sleeping With the Enemy) by Labor Day; April and Marc’s relationship is under siege by a malicious mama; and poor hapless Kate is so busy taking sexy head shots of Scott (of all the choice body parts on that man’s body…) that, well, ugh… do we really have to talk about that Aussie nitwit? (OK, we will, but not ’til it’s absolutely necessary. #RandyForMistressNumberFourInSeasonFive)

Clumsy hashtag behind us — feel free to trend it, though! — let’s recap the action from Season 4, Episode 8: 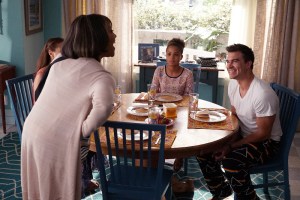 DON’T ASK OR TELL, JUST PURSUE?!?! | Remember last week’s “cliffhanger,” with April learning someone in her life had been in a car accident? Turns out it’s her mom Marjorie who arrives this week with a broken arm — but, as her doctor eventually realizes, a much bigger health issue, to boot: Late-stage cirrhosis of the liver. Perhaps just as troubling? The lifelong alcoholic-in-denial will only be eligible for a transplant if she refrains from drugs and booze going forward. As if April and Marc don’t have enough trouble sleeping on their leaky blowup bed, they’ve also got to discuss how to handle a seemingly impossible situation. While initially, it’s Marc who’s the optimist –  “People really can change, April… even the ones you least expect” — their unified front goes the way of a gin martini in a 450 degree oven when April presents her mother with brochures for an assortment of rehab centers. “If you send me away, I’m not gonna make it,” Marjorie cries. And April — so moved by her mother’s very rare display of honesty and regret — agrees to let the older woman take permanent residence in their not-exactly-enormous home, without any consultation from/approval by Marc. It’s yet another signal that April doesn’t completely view him as her equal, but rather as a manchild in need of managing, and you can see in his eyes the way this latest kerfuffle is putting a strain on their relationship. He reluctantly agrees to April’s plan, but later, as Marjorie questions Marc’s musical aspirations and lack of steady income, it’s clear he’ll be sleeping in his music room while the enemy occupies his and April’s master suite. “You won’t be around much longer — trust me,” purrs Marjorie, with a wicked smile. But why is Marc so afraid to tell April the truth when she’s not exactly blind to her mother’s manipulations? Terminal illness or not, Marjorie deserves a march to the airport, a Game of Thrones-esque nun behind her, ringing a bell and yelling “Shame! Shame! Shame!” 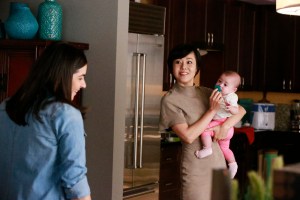 THE HAND THAT ROCKS THE LADLE | Damn, Karen’s latest nanny — is this No. 3 or 4? — really knows how to transfer a week’s worth of meals into an artful display of tupperware, doesn’t she? Still, like that one lid that refuses to seal, Karen looks at Lydia and sees something quietly wrong. April encourages her “crazy” friend to actually sit down with Lydia and get to know her, which leads to the revelation that Lydia’s an army brat who’s grown up to be a lonely adult. OR IS SHE? After a confession that goes something like, “bless me, sexpert, for I have not sinned. My last date was three years ago,” Karen encourages the young woman to put herself out there. And she does. And that’s great. Except that as Lydia finishes her “ShyGirl45” profile — on Karen’s computer?! — she uploads Karen’s sexy author photo from her Unleashed memoir. Is this a case of misguided but non-psychotic physical insecurity or an instance of Single White Female-level insanity? (Note, I’ve now referenced Single White Female, The Hand That Rocks the Cradle and Sleeping With the Enemy in one recap! What next? Dead of Winter?) Regardless, in the week’s most moving scene, we learn Karen grew up feeling more attached to her light-hearted aunt than her own mother, a woman whose grand total of “I love yous” can be counted on one hand. And just like that, we’ve got new insight into Karen’s intimacy issues. But as for Lydia… nanny cam, anyone?

GIRL, BYE | Look, I wanted to give Kate a chance, just like we all gave Calista a chance in Season 3. But I’m done with this walking Jell-O mold of misguided blame and questionable decision-making. I mean, the week opens with her taking headshots of Scott in the park! I know she’s trying to expand her photography skills, but shouldn’t she be picking up an extra shift at Maison Sur Mer — or maybe telling her brother and his fiancée that she’s dating said fiancée’s ex-fiancé?!?! (Take a second to digest that ridiculata – and pop a Tums if necessary.) Instead, she allows Scott to do the dirty work, but not before her loose lips let slip that Harry and Joss called off their Vegas nuptials and haven’t quite thawed the ice since. I haven’t seen this much mess since my twins tried fingerpainting last summer! 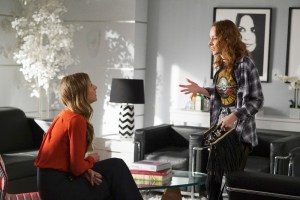 HE WANTS TO LEAD THE GLAMOROUS LIFE… WITHOUT LOVE, IT AIN’T MUCH | Joss has a lot on her plate — and I’m not just talking about her year-long, undiagnosed PTSD from the night that Wilson in a Caftan took her hostage. She’s dealing with her biggest client Stacey North’s self-inflicted P.R. disaster (Twitter rant at her married A-list lover, bagel-licking incident caught on camera) and when she gets home, Harry’s polishing his motorcycle in their living room! (OK, maybe it’s a semi-indoor porch situation, but that contraption belongs in the driveway — or at a bare minimum the garage.) Worst of all, Harry is completely blasé about Joss’ work woes. HOW DOES HE NOT KNOW STACEY IS THE KEY TO JOSS’ SUCCESS AS A PUBLICIST? I mean, my husband is a medicinal chemist, and everything he does flies over my head like seagulls to beach umbrellas, but I make it a point to know the difference between hypertension and high cholesterol, y’know? What’s more, Harry tells Marc he doesn’t understand why he needs to choose between his love Joss and his boss Jonathan — ignoring the fact that Jonathan took the side of his nephew over Joss, even though she was the one who tried to stop the kid from violently assaulting his date. And even though Joss herself was recently the victim of a violent assault which she is still unable to discuss in detail. Man, I have rooted for Joss and Harry since Season 1, back when it was almost obscenely inappropriate to do so, but now I’m beginning to wonder if girlfriend deserves better. (Hey, what’s that sexy chica Alex up to these days?)

OK, so this recap is careening toward 1,500 words, so lemme try to make a delicious reduction of the remainder of Joss’ storyline this week. Harry attends Jonathan’s charity event solo — and meets a gorgeous movie star who’s probably/maybe not hitting on him, and yet probably hitting on him, and pays him $15,000 to teach a cooking class for her and all her friends, a class to which all of her friends arrive conspicuously late. Five years ago, she was just happy to book a Taco Bell ad, and now she’s making millions per picture. “When it’s your turn,” she tells the budding Food Network star, “just be sure to enjoy the ride” (and beweare those who want to make you feel bad about it). She’s pretty and open and she lives in Grace Kelly’s old mansion. And… uff da..

Back at home, Harry is channeling the movie star’s words, but Joss says she’s not really sure this is the ride for which she signed up. Harry says it’s her choice to be distant, especially when she once again refuses to divulge the details of her abduction at Wilson’s hand. But here’s the thing: When you love someone, and that someone is utterly traumatized by a daft incident involving a sociopathic murderer, don’t you slow your roll in the haughtiness and indignation department and give them all the room they need to breathe? I love Joss too much to see her suffer at the hand of the man for whom she gave up her own sister. I get that the clock is ticking for her to be vulnerable enough to let Harry in — on one level, it is her choice to grow distant, not just his — but she’s also got a point: Harry’s gone from a guy with a simple dream of a beachside fish shack to a minor celeb with his face on billboards and his own restaurant being built atop one of L.A.’s premiere hotels. Nothing wrong with that, of course, except for when he chooses that dream over the stability and happiness of Joss, the very woman who opened his eyes to this dream. Whoever you’re siding with, though, it’s not a good sign that Joss ends the episode downing one of Stacey’s confiscated pills in order to quell a panic attack.

Oh, I forgot to write about a really important part of the episode.

HELLO FROM THE OTHER SIDE! AT LEAST HE CAN SAY THAT HE TRIED! | When Kate tells Scott she hasn’t told Harry and Joss about their relationship because of the latter couple’s postponed wedding and subsequent tension, he takes it as a sign from the universe that he and Joss are still endgame. (Oh, Scott, be realistic… your relationship started with a Louboutin-driven fantasy!) Scott’s all, “It wasn’t me! You’re afraid of commitment!” And Joss is all, “Delete your account.”
Joss spares Kate’s feelings and takes the blame for why her future sister-in-law can no longer date her ex-fiancé — neglecting to mention Scott called Kate a mere “substitute” for Joss. “I thought Savi was the bitchy sister,” snarls Kate, utterly clueless to the obvious subtext that is playing across her field of vision like closed-captioning. “I guess I was wrong.” It’s not too late to go to Qantas.com and get a one-way ticket, K?

What did you think of this week’s Mistresses? Are you through with Kate? Can Joss and Harry be saved? And just because Karen’s paranoid, does it mean someone’s not out to get her? Sound off below!