Raise your hand if you found yourself gagging during this week’s The Night Of — and not because of a return visit to the gruesome crime scene or the tenuous state of Naz’s case or even the unfortunate placement of Stone’s “eczema chopstick.”

Nope, I’m talking about that scene where our presumed-innocent inmate sits across from his legal team and surreptitiously tries to gulp down four grape-sized packets of drugs that had moments prior been extracted from the netherregions of a fellow prisoner’s mother.

Granted, I sometimes get tears in my eyes from the mere sight of an overly large antibiotic, but even so, the moment represents yet another moral/physical compromise in the HBO limited series’ relentlessly murky pond.

Elsewhere, Stone and Chandra finally get a break in building their defense; Naz proves he’s more Thumper (so to speak) than Bambi; and our hard-boiled D.A. comes to a jarring (albeit not necessarily correct) conclusion.

Read on for a recap of Season 1, Episode 5, “The Season of the Witch.”

YIKERS, RIKERS | Naz moves into a private cell, courtesy of Freddy, but nothing at Rikers comes for free. Soon after, Naz is summoned to the showers, where his “tour guide” — the one who scalded him with hot oil last week — has been left naked and bloodied by Freddy & Co., and awaits further punishment from Naz. Our protagonist settles for one swift kick, but when the unrepentant dude screams out that he’d been aiming for Naz’s face, Naz goes wild, unleashing all of his jail-related frustrations in a flurry of body blows, kicks to the head and punches to the face. Later, Freddy sits in Naz’s cell and watches him intently, ’til the college student rouses. “The man is in the ICU, and you here sleeping like a baby,” Freddy smiles. “You got some secrets in you, don’t you, and some rage? I like it.” Does Freddy see a darkenss in Naz that we weren’t privvy to in the character’s pre-murder-night scenes? Or is Freddy simply trying to shape another solider in his army? At the very least, the darkness of Rikers seems to be taking root as Naz eventually shaves his head and smuggles in the aforementioned eight-balls to a delighted Freddy. 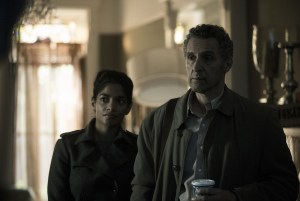 HEY, IT’S MORE PLAUSIBLE THAN WALL GREENS | Chandra hires stone to help her on Naz’s case – she (or rather, her firm) agrees to $30,000 up front, which we learn is half of Stone’s entire billings from the prior year. It’s a good thing she’s got a street-savvy player on her team, someone who can explain the purpose of the ketamine in Andrea and Naz’s tox screens, and someone whose moral ambiguity allows him to squeeze Andrea’s delaer for intel. Chandra and Stone also bring their own crime-scene expert to Andrea’s, where he finds some blood (though it could just be a squirrel’s) out back, and notices the faulty gate that just can’t be coincidence. Less encouraging, though, they learn only Naz (not Andrea) had adderrall in his system, which makes his “I passed out” story less believable. Stone grills him on lying about his own drug use before meeting Andrea, but Naz goes with the “speed is the drug of the tired student” defense, and insists there’s not a more nefarious layer of misdeeds lying beneath his tale.

When Naz casually mentions that Trevor (the weed-dealing eyewitness) wasn’t alone when he passed Andrea’s house, though, it sets off alarm bells for his legal team. Stone tracks the kid down to a laundromat, and learns he didn’t mention his associate Duane Reade (who shares a name with NYC’s most ubiquitous drug-store chain) because the latter dude is pretty scary. Turns out, he’s got a rap sheet that includes breaking and entering and felony assault. But when Stone confronts Duane at a poker game in the back of a local bodega and Duane flees, the chase leads to a grim, rat-infested basement, and the ambiguous last scene finds Stone in an almost portrait-esque stance, as the eczema-fighting U. V. lights that opened the episode flash ominously. I sincerely hope this wasn’t an artsy way to signal Stone’s death: Who else is going to fight for Naz and feed Andrea’s kitty that’s been sprung from the shelter and is living with toys and food (but no human contact) in his spare bedroom?

OH, HELEN, NO! | Helen confronts Box about putting in his retirement papers after 33 years on the job — so we know Naz’s case is his last hurrah. He’s not spending more time with family, opening a bar or moving to Florida and getting his commercial fishing license, he grumbles, which leads Helen to pluckily shoot back, “So what’s left? Golf.” She tasks him with pinpointing Naz’s movements on the night of, and it yields big results: Security camera footage of Naz kicking the two party dudes out of his cab, right before Andrea gets in. “He doesn’t want two guys. He wants one girl,” Helen says, having an “A-Ha!” moment. “This is lying in wait. This is premeditation.” And this is not looking good for Naz. But it’s interesting that Helen crosses Trevor off her witness list when he gets defensive about where he headed after passing Andrea’s house. And what to make of that scene where Helen cajoles the medical examiner into saying the cuts on Naz’s hand came from the blade of the murder weapon, rather than broken glass from his re-entry into the house? It’s all as perturbing as Helen placing that photo of Naz’s palm next to the flacid penis of a corpse on the slab, no?

What did you think of this week’s The Night Of? Is there a chance Naz is guilty? Or is Duane a more likely culprit? Sound off below!