Just as The Man in the High Castle involves a mystery about its titular string-puller, the Amazon series itself has faced a question about who’s running the show in the wake of Season 1 boss Frank Spotnitz‘s departure.

In May, Spotnitz abruptly exited the drama amid a difference of opinion with Amazon regarding his involvement in Season 2. The Vancouver-shot drama quickly went into hiatus, with other members of the production team scrambling to fill the EP’s duties.

Appearing at the Television Critics Association summer press tour on Sunday, executive producer David Zucker was asked who carries the title of showrunner for Season 2 (premiering Dec. 16). “We’re running in many ways like a republic,” he answered, not singling out any one person.

“There are senior powers in every aspect of the realization of this show,” as instituted during Spotnitz’s tenure, he added. “At this point we have a system that’s working as good as we can make it, to make the best show possible.” That said, he acknowledged, “No one would choose to build a show this way.”

Shedding some insight on the circumstances which perhaps fed into the behind-the-scenes shake-up, Zucker, a veteran producer, said, “Very honestly, this is the most complicated show I’ve ever been associated with,” with a writing staff based in London, filming being done in Vancouver and post-production handled out of Los Angeles. “It is almost, more than any other series, the sum of the parts.”

Zucker reassured that though Spotnitz is gone, the process he created is wholly intact, that no “coup” took place here. “Nothing has changed within the ensemble of the show and all of the talents who are contributing to fulfill what he set forth…. The team in Vancouver, the writing room is exactly the same.” 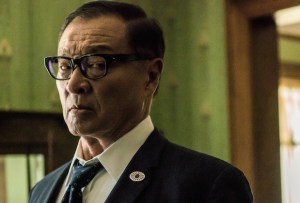 what transpires on the screen this season, EP Isa Dick Hackett said, “There is quite a bit” left to extract from the source material, Philip K. Dick’s 1963 novel — including actually meeting the Man in the High Castle this season. (The origin of the mysterious film reels is “a discovery process,” added Zucker).

Hackett also confirmed that “we are to believe” that two realities co-exist, as suggested by Season 1’s final sequence — and the fact that the Season 2 trailer played at TCA showed Trade Minister Togami back in the alt world.

What exactly all that is about “is a question this season will answer,” portrayer Cary-Hiroyuki Tagawa assured. “We’re definitely charting some new territory.”