Toward the end of Episode 2 of The Get Down, Baz Luhrmann’s ’70s-set drama about the rise of hip-hop and the fall of disco in New York City, there’s a line of dialogue that hints at the both the undeniable joys and the patented absurdities of the show’s premise and execution. 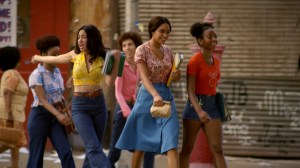 You wouldn’t expect even the most wide-eyed dreamer to confuse a California theme park with the baddest borough, but it’s hard not to as Luhrmann juxtaposes grainy archival footage of The Big Apple during the city’s bankruptcy and vibrant set pieces where chicas strut down Bronx streets, Technicolor-style, to Donna Summer’s “Bad Girls.” By tossing fistfuls of glitter and grit onto the canvas, the Moulin Rouge director creates a work that’s sometimes ridiculous, sometimes sublime and occasionally both.

There’s no lack of ambition in the three episodes of The Get Down (premiering Friday, Aug. 12 on Netflix) that were screened for critics. It touches on issues of political graft and urban renewal, devotes entire scenes to the mechanics of dropping the needle on the record, and explores the sacrifices and compromises artists make as they try to make their dreams come true.

At its heart, though, The Get Down is a star-crossed love story between Ezekiel and Mylene (newcomers Justice Smith and Herizen F. Guardiola), an aspiring rapper and a wannabe disco diva whose outsized yearning for artistic glory always seems threatens to pull their relationship beneath the undertow. Not only does The Get Down soar when the babyfaced duo enter each other’s orbits, but their musical moments pump crayon-red blood into the show’s vascular system whenever its less vibrant subplots begin to meander.

Smith is so mesmerizing when he grabs the mic at an underground party overseen by a fictionalized version of real-life emcee Grandmaster Flash (who’s, perhaps not coincidentally, a producer on the series), you’ll be hard-pressed not to join in the call-and-response from your couch. Guardiola, meanwhile, steals Episodes 2 and 3 with performances in front of a church choir and at an almost abandoned recording studio. Beyoncé, Rihanna and the one who’s feuding with Kim Kardashian, beware! 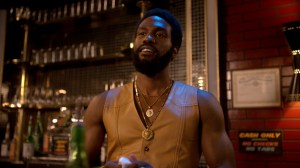 Not unexpectedly in a Luhrmann production, there are certain elements that descend into camp — some of them effective (Lillias White’s drug lord Fat Annie is theatrically wicked — and tons of fun) and others not so much (Yahya Abdul-Mateen II’s coke-snorting villain Cadillac is so cartoonish, you half expect a flag emblazoned with the word “POW” to pop out whenever he pulls his trigger).

And after three-and-a-half hours of action, The Get Down‘s tone still seems to be a work in progress — not that there’s anything inherently wrong with a “hey, there’s even a kitchen sink!” melding of genres.

The good news is that Ezekiel’s poetry and Mylene’s pipes are so undeniable, you’ll relate to the former’s optimistic English teacher (Treme’s luminous Yolonda Ross), who pays a home visit to implore his guardian aunt to do him a favor and read his words. Buoyed by a thrilling soundtrack, an exciting young cast and in-the-present-day flashes that foreshadow where Ezekiel’s journey winds up, Ms. Green might just be on to something.

THE TVLINE BOTTOM LINE: Luhrmann detractors will probably say that The Get Down bites off more than it can chew — and they won’t be wrong — but some of those bites are, nevertheless, delectable.