The Suits lawyer has been in love before (with Sheila Sazs, in particular), but the introduction of Carly Pope‘s architect Tara Messer in tonight’s episode (USA Network, 9/8c) spawns a whole new level of adoration on Louis’ part.

From their first meeting, the seemingly unlikely pair are “seeing eye-to-eye without even realizing that they’re seeing eye-to-eye,” Pope previews. “Louis is complaining that if someone wants a job, they should be here half an hour prior — and she shows up right behind him.”

But it’s more than just punctuality that bonds the two professionals. On a more personal level, “They’re just naturally compatible,” the Popular alum/Arrow Season 5 guest star says. “They love the same things. They see the same things in life. They appreciate the lyricism that life presents. They think artfully. There are all these common ground moments between them that makes for an easy dynamic.” 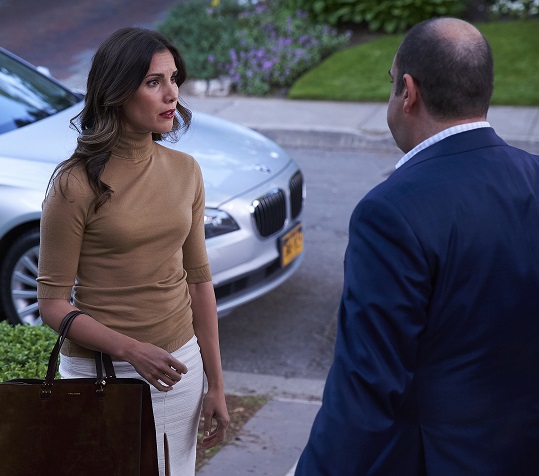 It helps that Louis, who frequently puts his foot in his mouth, is “on his best behavior” around his new crush. “A lot of the Louis that we know as an audience is kept at bay with Tara, for better or worse,” Pope notes. “She doesn’t see the Littisms that everybody else sees.”

“Tara draws out in Louis a genuine honesty that maybe we don’t see as often as we should,” she adds. “They bring out the best in one another.”

For his part, star Rick Hoffman calls the interplay with Tara “some of my favorite scenes so far this [season]. They’ve given me a lot of fun stuff again this year, but these scenes with Carly, just because [Louis is] never really into the whole lovey dovey thing, have been really fun.”

It’s clearly love at first sight for the lawyer, but does the object of his affection share his insta-feelings?

“What Tara sees in Louis right away is someone who has passion, zeal, presence and appreciation for the same things in life,” Pope replies. “Those are qualities that are hard to overlook in a person. I think Tara’s genuinely really delighted by his spirit.”

In fact, the architect is so taken by the firm’s partner that “though it’s uncharacteristic for her, professionally, to take on the type of job that he offers, she makes a snap decision to maintain this dynamic, because it’s one that’s refreshing and one that makes her feel good,” Pope shares.