Despite the twisted circumstances of her death on Tuesday, Pretty Little Liars‘ newest victim doesn’t want your sympathy.

“I never expected any kind of redemption, to be honest,” Dre Davis tells TVLine of Sara Harvey, who failed to get back into the Liars’ good graces before meeting her untimely end at the Radley. “There was one day on set where Shay [Mitchell] was like, ‘Wow, we’ve really done so much s–t to you,’ and I was like, ‘Well, I’ve done s–t to you, too!’ I don’t think Sara really deserved much. I mean, she lost the use of her hands, but everybody ends up with scars in Rosewood.”

Below, Davis speaks with TVLine about Sara’s mysterious killer, her relationship with Emily and what she’d like to see on her character’s tombstone. (Spoiler alert: Hashtags are involved.)

TVLINE | I hate to start with the most cliché question, but when did you know Sara was a goner?
Not until the table read, honestly. I knew it when I read it in the script. … Marlene gave a talk right before the table read started, but I’m always early, so I looked at the script beforehand. And I really wasn’t surprised. I guess I was just expecting death, or at least I was ready for it, just as I wouldn’t be surprised if I ended up coming back to life. I remember when we were filming a funeral, and Sasha [Pieterse] was like, “Oh, that was my casket!”

TVLINE | While we’re talking about returns, any chance we haven’t seen the last of Sara, even in flashback form?
[Laughs] Oh, you’ll just have to tune in to find that out. 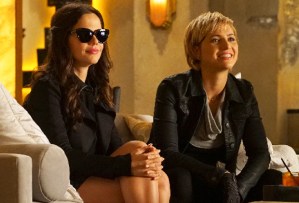 TVLINE | Fair enough. … In her scene with Emily this week, I got the impression that Sara genuinely didn’t know what Jenna was up to. Was she as naïve as she seemed?
I think there was some kind of impetus behind her joining with Jenna, but I don’t think it came from naïvety. I think she was trying to balance her loyalty to the Liars and Emily with the need to get answers. I never really thought she was naive, but I definitely think she got screwed.

TVLINE | I know you can’t say who it is, but do you know who killed Sara?
I don’t know!

TVLINE | Do you want to know, or are you having more fun theorizing?
I do want to know, but I want Sara’s mysteries to be revealed slowly. As an actress, I don’t want spoilers. That’s not my concern. I just want Sara to be fully revealed. I like that she was such a mysterious character, and I’d like to know more.

TVLINE | Do you feel like we didn’t get to know the real Sara?
Yes, I feel like there are a lot of mysteries still around her past and her intentions.

TVLINE | Sara and Emily’s relationship was a hot-button issue for many fans. In an alternate universe, do you think they could have been happy together?
Yes, I do! I think there were genuine feelings between them — and I love alternate universes, so I love that you said that. I don’t know how we get to that universe, though. I’m still trying to figure it out. 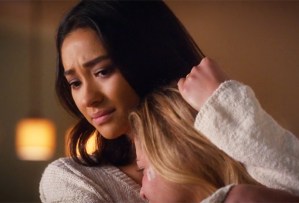 TVLINE | What are your thoughts on Emily (potentially) ending up with Alison in the end?
“Emison”? I like them together a lot. I think they should end up together. Plus, the fans love them. The show should end with them together, so the fans can be happy for the rest of their lives. [Laughs] Let’s just give it to them.

TVLINE | I assume Sara won’t get a big, traditional Rosewood funeral — but what would you put on her tombstone?
“Bye!” [Laughs] I don’t know. “Later?”

TVLINE | Hashtag “Later!”
Hashtag “See you in the next life!” … Oh, man, there will so be hashtags on tombstones soon! Oh my gosh, that’s going to happen.

OK, PLL Nation, let’s hear it: Do you agree that Sara got “screwed”? Who do you think killed her? And what are your hopes for the rest of Season 7A? Drop a comment with all of your thoughts below.