Who’s ready for double the Baby Daddy in Season 6?

In the final moments of Wednesday’s finale, which presented a plethora of new paths for the whole gang, Riley dropped a massive bombshell on Danny: She’s pregnant! Meanwhile, Tucker landed a huge on-camera gig in Los Angeles, Bonnie reunited with her globe-trotting husband and Ben (almost) met the girl of his dreams in Elle (played by Katie Gill).

TVLine spoke with showrunner Dan Berendsen about the finale’s biggest surprises — including the alternate ending we didn’t see — and what the future holds for the entire Baby Daddy gang in Season 6.

TVLINE | So, Danny’s the new Baby Daddy, huh?
[Laughs] Yes! When we started the season, I told you the whole Danny/Riley conflict would resolve itself, and I think it’s safe to say it’s been resolved.

TVLINE | Last week, Danny was freaked out by the idea of Riley being pregnant. Has his attitude changed?
I think, like any man, he’ll be a little bit of a wreck. But in that other episode, he was also the first person to tell Riley he’d be there for her and the baby; you can tell what kind of a father he’s going to be. Danny lives up to this responsibilities.

TVLINE | That’s going to be a huge baby.
[Laughs] I know, I’m already feeling bad for Chelsea [Kane]. That’s not going to be a subtle baby bump.

TVLINE | Riley’s a pretty traditional girl. Is she going to want to get married before she has the baby?
It will definitely be a conversation. We’ll definitely visit that next season.

TVLINE | Was the point of last week’s triple pregnancy scare just to throw us off Riley’s trail?
We did that for a few reasons. Yes, we wanted there to be a little bit of a complication, but we also didn’t want to spring [Riley’s pregnancy] on the audience out of nowhere. What we really wanted to do was somehow connect Emma to it; as you know, the only reason Riley is pregnant is because Emma poked all those holes in the condoms. You can basically say this baby was Emma’s fault.

TVLINE | That episode also saw the end of Sam and Ben, which was a bummer. Have we seen the last of Sam? I really like her.
We really like her, too. There’s a chance she could be back, but I also like the idea that Ben is really growing up. No matter how nice and beautiful a girl may be, his first priority is always Emma now. Once he heard those words, there was nothing he could do about it. He can’t be with a woman who’s going to think of Emma as an afterthought.

TVLINE | And what can you tell us about “Elle”?
You will see her again next season, but I won’t tell you when. She’ll definitely show up. It sort of gives Ben a little quest. Also, coming off of Sam, Ben wasn’t sure if there was anyone right for him out there. Sometimes it just takes seeing someone and saying, “Wait, who are you?” They both had that feeling when they saw each other, which I liked. It was our nod to romantic comedies.

TVLINE | Danny and Tucker both had opportunities outside of New York. Can you say who’s staying and who’s going?
That’s something you’ll have to wait and see. We wanted to leave things open-ended. At the time, we didn’t know if we’d have a sixth season, so we shot a few alternate endings.

TVLINE | Can you say what happened in any of these alternate endings?
In our alternate ending, instead of Ben getting out of that cab at the end, his mystery girl got into the cab. You saw them drive off together, which was a way to end the show with the audience knowing that Emma and Ben would both be OK.

TVLINE | And I imagine there will be some sort of time jump…?
Yeah, I expect so. We normally come back on a big cliffhanger, but I think there will be a little bit of a time jump here. We’ve been off longer than we normally are, too, so people have gotten a little bit older. I don’t think it’ll be massive, but it won’t be the next day.

TVLINE | Lastly, I’m glad Bonnie and Brad reunited. What’s next for them?
We haven’t completely figured out where Bonnie and Brad are going. … It’s such an odd relationship, but I love how they’ve developed. I’ve never seen a married couple quite like those two.

Your thoughts on the Baby Daddy finale? Hopes for Season 6? Grade this week’s episode below, then drop a comment with your full review. 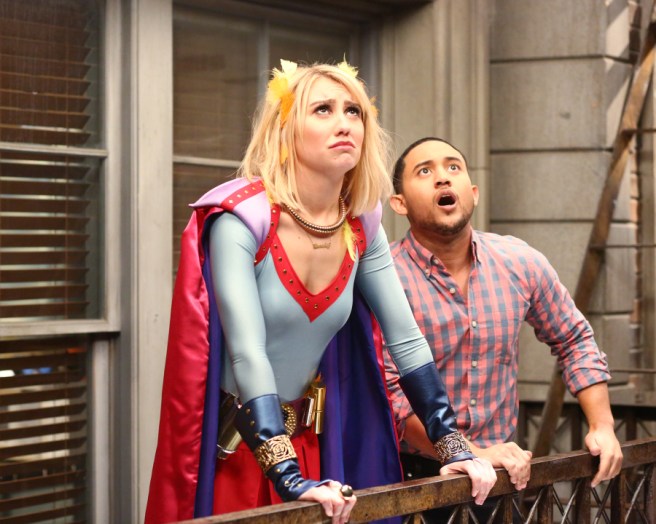