When one custody battle closes, another door (to an ill-advised but salaciously entertaining thruple) opens.

Throw a side-eye in my direction for kicking off this week’s Mistresses recap with a wish that ignores the obvious followup question (“What about Baby Vivian?!”), but you know the thought crossed your mind, too, after Alec’s dropped his brief but infuriating play for full custody.

As Karen experienced a tender moment with her baby daddy and his new wife in their tastefully appointed L.A. home, I couldn’t help but wonder: Could a Karen/Faith ladies’ night — complete with ganja-smoking, hair-braiding and wah-chicka-wahhing — be far behind? (I’m gonna stop you before you wink and suggest the happy trio hire Robert for “babysitting” duty. Then again, if Mistresses manages to get a fifth season, perhaps Karen’s sophomore novel could be titled Four Score. Badum-bum!)

Meanwhile, Kate is doing her best to get Scott’s office shut down for health-code violations, Marc is possibly struggling to stay faithful to Gorgeous McJudgyface and Joss is owning the heavy bag like Michelle Obama at a DNC podium.

Read on for my recap of Season 4, Episode 7, “Survival of the Fittest”: 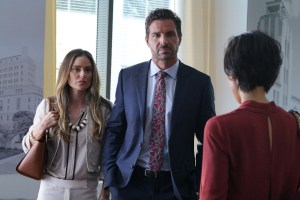 HEY, THAT ATTORNEY LOOKS FAMILIAR | I don’t recall Jason George’s hunky Dom (aka the guy who helped tear apart Savi and Harry, but has now been married for eight months to a woman whose identity remains a mystery) specializing in custody law, but here he is helping out Karen (not a euphemism) in her battle against Alec’s claim for full custody (and only supervised visits for Karen). Alec is going scorched-earth — bringing to the negotiations his voicemails of Karen contemplating an abortion at 12 weeks — but taking no responsibility for abandoning his erstwhile lover throughout her pregnancy and the first four months of Vivian’s life. When the wee one’s fever and cough reaches dangerous levels, though, Karen does what’s right by her infant, bringing her to Alec and his pediatrician wife Faith, who happens to have an antibiotic stashed in a secret drawer in the kitchen labeled “black-market RX.” (OK, I made up that detail, but we need to score points against Alec’s new wife where we can, yes?) Karen’s devotion softens Alec’s douchebaggery, and when we leave them, it looks like they’re going to come to an amicable custody arrangement without court intervention. Fingers crossed, so our messiest Mistress can get back to her next-level foolery! 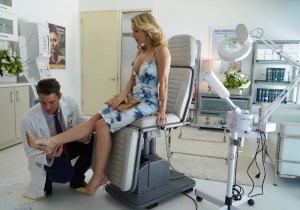 TO HEELS AND BACK | Kate just can’t quit Scott, even though he’s the ex-fiancé of her brother’s current fiancée (who’s the sister of his ex-wife). (For your health and safety, please don’t do a flow chart of those sexual relationships, K?) Kate makes an appointment with Scott — wearing the kind of bedazzled heels he bequeathed to Joss on, like, their third date — and before he can say the word “incestuous,” they’re doing things on the examining table that don’t/shouldn’t require paper gowns. Scott doesn’t want anything more than a fling — not without Harry and Joss’ blessing — but Kate winds up lying and saying the duo is totes cool with the new (and completely unplanned) love affair. I’d be less squicked out by all of this if Kate weren’t living under the same roof as Harry and Joss, but I hope it doesn’t need saying that none of us want cross-pollination if Scott/Kate and Joss/Harry wind up sleeping under the same roof.

WHY MUST SHE BE A TEENAGER IN LOVE? | Could April be getting a juicy storyline for Christmas? Don’t get too excited too quickly. While she shares a tender moment with bratty Lucy — whose story about how she got a condom in her coat pocket doesn’t seem fully plausible — April seems to be falling into a “roomies” groove with Marc rather than something more “two paint-soaked bodies all up on the canvas.” (Ahhh, remember that glorious sex scene, people?!) And so while I’m hoping Marc didn’t take the bait when his ex-flame/current bandmare Sofia clutched his hand (the end of the hour didn’t clarify), 20 percent of me worries April’s unflinching faith in her guy will come back to sting her before the season’s out. I’m also worried Lucy is more than friends with that brainiac who’s reading well above his grade level, but won’t be upset if there’s little-to-no followup in this department. I mean, it bears repeating: We don’t watch Mistresses for the story arcs of underage characters!

REZA-ISTANCE IS FUTILE | Harry learns from Jonathan — not from Joss — about her violent alteraction in Las Vegas with Reza, and I can’t help but think this conversation would’ve gone a lot more smoothly (and taken on less a life of its own) if she’d have called 911 (and her man) immediately after laying the beat-down on the misogynist nephew of her fiancé’s boss. Harry, not having a full grasp of what happened, wants Joss to apologize (and save his joint partnership with Jonathan) but Reza’s petulant response to Joss’ “I’m sorry” means the whole deal collapses in on itself like a Kardashian ego without a paparazzi camera in a 20-mile radius. Harry eventually follows Joss back to her Impact class — and at long last realizes the woman he loves is still dealing with PTSD from her encounter with Wilson. But Joss rejects her man’s plea to return to counseling, instead channels every last ounce of aggression into a bag-throttling frenzy. (Should Joss maybe be tested for powers/considered for an Agents of S.H.I.E.L.D. arc?)

What did you think of this week’s Mistresses? Share your thoughts and theories below!