For Deadliest Catch captain Sig Hansen, the end of Season 12 — and the crab-fishing season — couldn’t come soon enough. And who could blame him?

Not only were the crab particularly elusive, but there was a fire aboard Hansen’s boat, the Northwestern, and he suffered a heart attack at sea. Still, “at the end of the day,” he tells TVLine, “I think that I did fine.”

Here, he explains why — as well as weighs in on the performances of his former and current protégés, plus daughter Mandy, a budding skipper herself.

TVLINE | How can this season possibly have been “fine” for you? Dude, you almost died!
Well, it was one of the more stressful seasons that I’ve had, that’s for sure. And remember, you only see some of the things that happened during those four months on TV.

TVLINE | That’s kind of my point.
Yeah, but even though the crab were very, very hard to find, we did find them, ultimately, so I’m proud of that. I just feel like I did well because I found them.

TVLINE | How would you rate Mandy’s performance
She was fine. For her, it’s a different learning experience. I can’t speak for her, but I wanted her to experience the wheelhouse and a different side of [the business]. I’m trying to fast-track her. It’s probably not fair, but at the same time, she’s smart enough to get it.

TVLINE | How come it seems so much easier for you to give Mandy a break than your brother?
Edgar’s running the boat, Mandy’s just taking care of the boat. 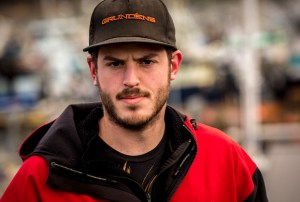 TVLINE | [Laughs] Moving on, let’s talk about your new protégé, Sean Dwyer. How would you say he did in his first season?
He showed a lot of maturity. That guy did really, really well. He had a lot to prove, and he did. So I was very proud of him.

TVLINE | And his “predecessor,” Jake Anderson?
Jake… I mean… [Laughs] He’s done well. He’s just a little more… What’s the word I want for him?

TVLINE | Volatile?
Passionate. He’s so passionate. Which I like. That’s why he’s going to succeed. But at the same time, it means he can never just take a step back and look at the overall picture.

The Season 12 finale of Discovery’s Deadliest Catch, “The Widowmaker: Part 2,” premieres Tuesday at 9/8c following a new episode of Deadliest Catch: The Bait (8/7c) in which the hot topic is Hansen’s heart attack.