Like John Stone’s unrelenting eczema, nothing seems to help Nasir Khan’s plight on The Night Of.

Both in court and at Rikers Island, our Bambi-eyed protagonist is faced with choices more brutal than a TV addict reduced to a cable company carrying only Real Housewives of Wherever and Keeping Up With One of Those Soul-Crushing Kardashian Brand Extensions.

Does Naz confess to a heinous crime he’s reasonably sure he didn’t commit and guarantee himself freedom before his fortieth birthday, or maintain his innocence and risk spending life in prison? Should he stick with the high-powered law firm that looks good on paper or revert to the precinct crawler who seems to really care about his fate? And on a more urgent note, should he seek protection with foreboding fighter Freddy, a guy who views him as “a care package for his brain” or align himself with a dude who walks around with a photo of his dead niece’s bloodied face in his pocket?

While you ponder the correct answers to those questions, let me recap the action from Season 1, Episode 4, “The Art of War”: 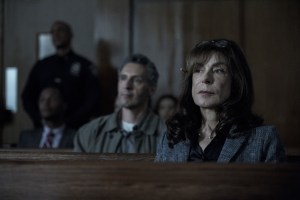 DEAL OR NO DEAL | “I need you to trust me like you’ve never trusted anyone in your life,” says slick attorney Alison Crowe, in her first meeting with Naz. And to be honest, the episode gives us no reason to doubt her advice — other than, perhaps, her love of a press conference. (In introducing Naz’s case to the media, she notes the disparity between a wealthy white victim and Naz’s status as being part of “one of the most reviled ethnicities in America.” Hey, though, maybe she’s just underscoring that Naz got “consciously overindicted” by the DA.

When a Sikh cab driver gets brutalized in the wake of Naz’s indictment, though, there’s a new edict: Plead out the case and get it out of the headlines. Alison goes toe-to-toe with ADA Helen (the sensationallt compelling Jeannie Berlin) and they quickly settle on a manslaughter charge with a flat 15-year sentence. Alison tells Naz it’s a heckuva lot better than “spending the rest of your life in a cage, wishing you were dead” — and she’s right. But the unbearable tension of the episode is wondering how Naz can confess to a crime he has no recollection of committing. When Naz seems not entirelty convinced, Alison sends in her associate Chandra, who goes off script. Did Naz kill Andrea, she asks. “If it’s yes, then take the deal. If it’s no, don’t.” And thus, despite even Stone dropping by the courthouse and reasoning that if Naz pleads out, he’s not truly saying he’s guilty, he’s only saying “you don’t trust 12 idiots on a jury to get it right — and neither do I,” our protagonist falters in front of the judge. He admits to no recollection of what happened after doing drugs and having sex with Andrea, and the disgusted judge sends him back to his cell. “I feel like killing you myself,” hisses Alison, as Naz remains unmoved. She’s so pissed, in fact, that she turns the case over to the far less formidable Chandra — and tells Naz’s parents that the case will no longer be pro bono. 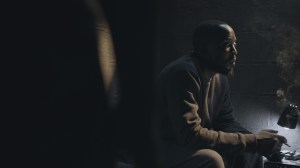 NAZ MAKES A FRIEND | In the wake of Naz’s cot being set on fire, he gains an unlikely new friend, a bald, black and very practical inmate who instructs the wide-eyed newbie on how to survive in the clink. “Respect’s all anybody’s got in here,” the dude explains, while also advising that Naz “start looking like a man who’s not afraid to look a man in the eye” (without actually looking any of his fellow inmates in the eye).

At the same time, formidable former boxer Freddy continues his courtship/mentorship — sending Naz a blue jumpsuit for his day in court. But when Naz’s arm gets slashed in the hallway, he pays a visit to the Rikers power player and learns Freddy’s stated interest is in Naz’s mind (and not, perhaps, his body). Naz has already read “Call of the Wild,” but Freddy reminds him of the book’s lessons. “Survival in here is about your alliances, my desert brother,” he declares. And when Naz’s new tour guide shows his psychotic side — throwing a brutal combo of scalding water and baby oil in Naz’s face — it’s back to Freddy’s private cell. “Say the words for me, Nasir,” he says. To which Naz finally admits, “I need your help.” Oh please, The Night Of writers, let this Rikers scenario not get any more tense. The courthouse stuff alone is more than I can deal with without a strong prescription for an anti-anxiety med. 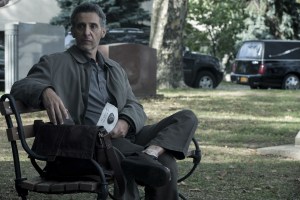 STONE COLD? | Stone keeps investigating the case — going to Andrea’s burial and witnessing a heated argument between her stepdad and a young, dark-haired dude. Our low-rent lawyer also learns Andrea had been in rehab muliple times in the recent past, and sells the intel to Chandra. Our broken-down attorney also makes a call to the clinic and learns Andrea’s cat is still awaiting adoption (but at least still alive). Why do I have a feeling that tabby might be the key to Naz’s freedom?

What did you think of this week’s The Night Of? Hit the comments with your thoughts — and your theories about how the final four episodes will play out!