God Almighty, he did it! In Preacher’s Season 1 finale Sunday, Jesse managed to use that severed angel hand on DeBlanc and Fiore’s divine cell phone to bring the Lord to All Saints’!

Or at least, for a hot minute, it appeared that he had. What really went down before the preacher, Tulip and Cassidy hit the road in search of the man upstairs? Keep reading…

‘NOBODY’S PERFECT’ | Early on in “Call and Response,” Sheriff Root, noting that jailbird Cassidy’s rap sheet dated back to the 1920s, correctly deduced that he was a vampire — which meant that he could shoot the blood-sucker (repeatedly) to motivate him to reveal what had happened to Eugene. When, instead of spill his guts, Cassidy suggested that a part of Arseface’s father must be glad to be rid of him, the sheriff emptied his pistol into the Irishman… then let him go.

Meanwhile, Tulip witnessed what had to constitute a miracle: The Schencks had taken in their nemesis, her fugitive ex. “Preacher was merciful,” said Donnie, recalling that Jesse hadn’t used Genesis to kill him when he’d had the chance, “so I was merciful, too.” In private, Tulip wanted to celebrate her reunion with Jesse by having him do something nasty for her — but not what he, or we, thought: She wanted him to murder Carlos, whom she had stashed in her trunk! 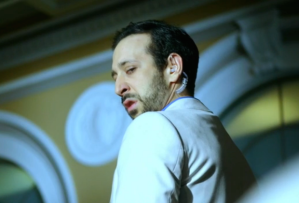 ‘WE WILL BURN IN HELL!’ | In a flashback, we learned that it was Carlos’ jealousy of an expectant Tulip and Jesse’s happiness that had prompted him to sabotage the bank heist that got a security guard killed — and caused the mom-to-be to miscarry. When finally the preacher agreed to pull the trigger, Tulip didn’t want him to ice Carlos anymore. The fact that her true love was willing to, she said, was “the most beautiful thing anyone’s ever done for [her].” So instead, they just beat the hell out of the weasel.

The next day, Betsy helped get rid of the cops so that Team Jesse could clean up All Saints’ in time for the most important Mass ever. Of course, “no matter what [happens],” Tulip told her beau, “we’re gettin’ French fries after.” When Emily’s daughter expressed surprise that Miles hadn’t shown up to meet God, his killer suggested that, er, “he’s meetin’ Him somewhere else.” At last, before a full house, Jesse placed his long-distance call, and… pfft. It didn’t seem to go through.

‘THAT SETTLES IT!’ | Just as Odin was declaring victory, the sun vanished, and a white-haired old white dude was video-conferenced in — it was God! Or so he claimed as he yelled at the congregation for daring to question him. “If we are your children,” Jesse shouted back at Him, “why don’t you act like a father, take some time out of your busy schedule and answer some goddamn questions?” 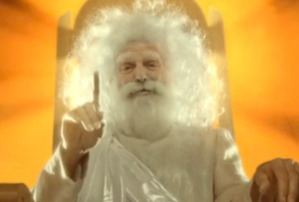 Tickled, the Lord agreed, then offered one reassurance (Odin’s daughter was in heaven) after another (Eugene was saved, too). Knowing that Arseface was actually in hell, Jesse called B.S., the celestial imposter admitted that neither was he God nor did anyone know where He was, and a disillusioned Annville descended into chaos. (Seriously, it was bad — everything from mascot suicides to Mrs. Loach smothering Tracy and Odin remaking his little girl out of ground chuck!)

‘THE PLAN IS SIMPLE’ | While a mournful Fiore returned to town alone (meaning what? DeBlanc really died in hell?!?), the monitor in that mystery control room we sometimes visit was passed out (or possibly deceased?). And the woman with whom he’d been engaging in some workplace BDSM didn’t know how to relieve the pressure on the system — which, it turned out, was QM&P’s Methane-Electro Reactor. As a result, Annville was blown to bits, with the prospect of survivors at approximately nil! (This seems like especially bad news for us fans of Emily, who wasn’t even a character in the comic books.)

At least Jesse, Tulip and Cassidy were away when Annville bit the dust. (#savedbyfrenchfries) The preacher even had a new plan: They were gonna find God, and if He wanted to play ball, great. If not, they’d kick His ass. And don’t worry, Jesse told another vision of Eugene — they’d spring him from hell, too. So, off the trio went down the highway to… who knows?… just as The Cowboy arrived on this plane of existence and blew a hole through that pesky seraphim!

So, what did you think of the Season 1 finale? Grade it via the poll below, then hit the comments with a more detailed review.