Warning: The following interview contains spoilers for Friday’s Outcast. If you’ve yet to see the episode, get the hell out.

In Friday’s Outcast, Brent Spiner‘s sinister Sidney not only explained to Kyle — and us — the ins and outs of possession, the demon also revealed that there are some things in the world that are just as bad or even worse than in hell. So we wound up finishing “What Lurks Within” with as many questions as we had when we began; they were just different questions. Luckily, we were able to get the actor on the phone to answer them.

TVLINE | I just watched the episode, and what can I say? Kudos on being so creepy!
[Laughs] Thank you. It comes naturally.

TVLINE | Let’s start with the basic question that, even after watching this episode, I’m still not 100 percent sure I can answer. Is Sidney a demon, or is he the devil?
No, he’s not the devil. I think it’s pretty clear that he’s something else, because he’s describing not just his own experience but other people’s experiences, too.

TVLINE | I suspect the revelation that the demons’ hosts are still “present” kind of turns on its head the understanding that viewers thought they had about these possessions.
Yeah, by this episode, it sort of becomes clear, at least to me, that we’re dealing with something other than what we thought we were dealing with. Sidney says something about being basically in control of the host body, but every now and then, there’s more of it than he wants there to be. And he talks about it being random who you wind up in. It’s not just Sidney, it’s a whole bunch of people.

TVLINE | Was it a surprise to find out that Sidney’s host is actually way more despicable than Sidney?
It was! [Laughs] I had no idea who [the host] was going to be. When it finally came out [that he had his own torture chamber for children], I was like, “Oh my God! The guy he has merged with is far worse than he is!” I think that’s unusual. I think it’s been true with some other people who have merged but profoundly so in Sidney’s case. He’s wound up with someone that’s really disgusting! 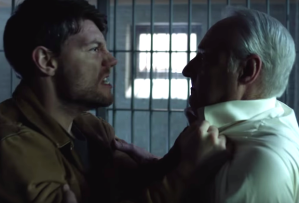 TVLINE | Yeah, you know a guy has to be really bad if an entity as bad as Sidney is troubled by his actions.
I think how bad Sidney is depends on point of view and what’s motivating him to do what he feels he has to do. He’s not just randomly evil. I think the most important thing Sidney has said during the series so far was in a scene with Mildred. He was looking at her [tchotchkes], and she asked, “Don’t you have anything that you’re fond of?” And he says, “I have a job.” I think that is the key statement that he has made [thus far]. What is that job? He tells Kyle, “I’m here to protect you.” So it becomes much more complex, much more than just good and evil. Something else is going on.

TVLINE | Have you shot the Great Merge yet?
No. We just started shooting Season 2 [Tuesday].

TVLINE | Do you know what it is?
My guess is, it’s going to be profound. But it comes to [the cast] in pieces. It’s a huge puzzle that’s sort of slowly coming together. I think, at some point, we’re going to see a very large number of people being merged.