Don’t blame Klaus if he doesn’t recognize his daughter when The Originals returns in 2017.

As revealed as San Diego Comic-Con, there will be a five-year time jump between the CW drama’s third and fourth seasons — and now, TVLine can exclusively introduce you to the actress playing grown-up Hope: Summer Fontana. 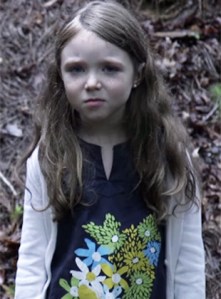 Fontana, whose credits include a role in the movie Basic Witches (how appropriate!), began filming for Season 4 earlier this week. And, seriously, is she not the spitting image of her parents? (Or at least her father?)

“I’m excited to see what kind of personality this little girl has,” Phoebe Tonkin said of Hope during the cast’s interview with TVLine at Comic-Con. “Even though she hasn’t been around her dad for the last five years, I think there’s a lot of Klaus in her — good or bad — and I’m excited to see that in this little powerful witch.”

Watch our full interview with the cast below, then drop a comment with your hopes for Season 4.