Warning: Spoilers ahead! Avoid this recap at all costs if you have not yet viewed the Season 2 finale of Wayward Pines.

Wayward Pines reverted to population: zero on Wednesday as Season 2 came to an unexpectedly bittersweet close.

With Jason dead, Theo quickly became Wayward Pines’ unofficial new leader, who was forced to do right by a town where everything has gone terribly, terribly wrong. (He started, of course, by not doing everything he could to save Jason from his bullet wound.) With C.J.’s help, the doctor proceeded with initial plans to put as much of the populace back into cryogenic pods as possible to save what they could of humanity. (Among those selected to be preserved: Rebecca, Xander, Arlene, Lucy, Frank and the aforementioned C.J.)

The doctor, who was having a crisis of conscience, initially didn’t intend to be among those slipped into a scientifically induced slumber. Instead, he planned to stick behind and inject himself with strains of bubonic plague, typhoid and Marburg left behind by Pilcher. In doing so, he’d not only expose himself to those unlucky humans who weren’t selected to go back to sleep, but he’d then feed himself to Margaret and her fellow Abbies, who would spread the combination of diseases and inadvertently wipe out their entire race. 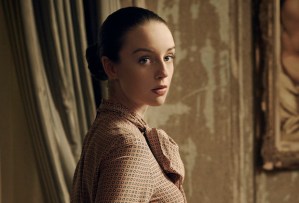 In the end, it was Kerry who served as the unlikely potential savior of mankind, sacrificing herself so Theo could enter cryogenics and one day start anew. After learning that Jason was indeed the son she had given up for adoption before waking up in Wayward Pines, the former tyrant’s mother-lover injected herself with all three viruses before stepping out beyond the wall.

C.J., too, had a decision to make. As he went to initiate the cryogenic process, he was once again visited by the memory of his wife, who told him that the fate of the human world rested in his hands. Though he had the opportunity to let humanity end altogether by terminating the pods, he instead proceeded with cryogenics and joined the others in a state of suspended animation.

Later, in an almost utopian epilogue, a new dawn showed the world still populated by Abbies, only these more closely resembled mankind. The camera panned in on a newborn that not only looked more human than the Abbies we’ve seen all along, but whose initial cry resembled that of an uninfected baby. As such, it would seem Theo’s quick thinking and Kerry’s selfless deed helped restore Earth to a hospitable environment.

So there you have it: a finale that, much like Season 1’s closing hour, served as a perfectly fitting end to the entire series. Would Fox serve the greater good by ending things here, or would you like to see the sci-fi drama press forward with additional seasons? Weigh in via our polls, then sound off in the comments section.