Well, that settles it. After this week’s installment of The Night Of, I’m swearing off even the most innocuous misdemeanors, like jaywalking or tossing a martini in the face of Ann Coulter.

From the opening images (rolls of barbed wire dotted with fluttering plastic bags) right through that closing shot of Naz’s cot engulfed in flames, I felt like I’d been completely immersed in the Rikers Island expeirence along with the wide-eyed college student indicted for a murder I’m pretty sure he didn’t commit.

Thanks to the deliberate and meticulous unspooling of plot, atmosphere and dialogue, I can now imagine navigating a life in which you’ve got to wear shoes in the shower to help ensure you don’t wind dead with “your brains bashed in and your guts on the floor.” I can feel the panic of having to decide whether to accept an offer of “protection” from an alpha inmate — without knowing the exact terms of the deal. 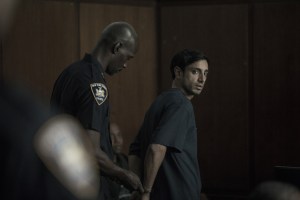 As Naz survives his first few days on this dark and terrifying planet — where a piece of raw veal is as packed with menace as it is protein — there’s plenty of action on the outside, too: a change of lawyers that, hard as it might be to admit, is probably the right call. More hardship for Naz’s bewildered family. And even a treacherous path for the forgotten tabby left orphaned by Andrea’s demise.

Hey, nobody said this was going to be easy viewing (although even Game of Thrones occasionally breaks the tension with an Olenna Tyrell one-liner). On that note, let’s recap the action from Season 1, Episode 3, “A Dark Crate.” 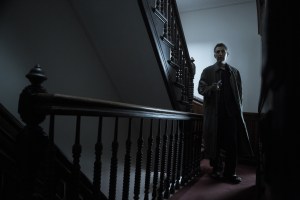 HIT THE ROAD, JACK | Looking to cement his status as Naz’s attorney, Jack Stone visits Naz’s parents and makes his pitch, but even in their fragile state, they’re not sold on the snake-oil pitch. (Right after telling them the words “I guarantee” are always a lie, Jacl “guarantees” no competent lawyer would work cheaper than him.) Jack makes some noise about how Naz is facing life imprisonment (true), but its clear he’s never had a case like this land on his desk. He asks for a flat fee of $75,000 — half that if it doesn’t go to trial — then drops to $60K, $55K, and finally $50K as he learns the Khans have only $8,000 in their bank account. With the retainer still unsigned, Jack visits the hard-boiled D.A., who tries hard to humor the grizzled courthouse vet, but finally loses patience when he keeps asking for some kind of plea. Instead, she gives him the number of a very reasonable tailor, and suggests he get himself a suit for the trial, preferably not in brown.

It’s hard not to feel for Jack as he wraps his eczematous feet in Crisco and saran wrap, visits a support group for his fellow eczema sufferers, and tries to do right by Naz, bringing him fresh clothes and practical jailhouse tips. But when Naz tells Jack his parents have hired a different attorney, Jack is at a loss to come up with any grand words of advice. He winds up back at the scene of the crime, picking up Andrea’s forgotten cat and bringing it to a shelter where it’s almost certain to be euthanized. Let’s just hope it’s not a parallel for Naz’s fate. 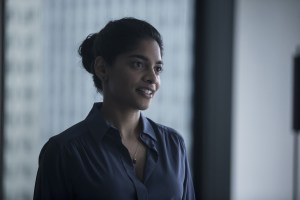 SOMETHING TO CROWE ABOUT | We meet sleek, media savvy attorney Alison Crowe (Glenne Headly) during a perfectly modulated press conference regarding a flight attendant’s suit versus an airline. When she sees Naz’s case on the news, she sees… an opportunity? a chance to do some good? both? Time will tell. She recruits Chandra, an Indian-American associate, to help her connect with Naz’s family, and by the time they leave, they’ve impugned Stone’s reputation (“He is barely a lawyer”) and secured the high-profile gig with the promise of top-notch, pro bono work.”This is the kind of case that reminds me why I wanted to be a lawyer to begin with,” Crowe says, and she’s convincing, too. But when Stone confronts Chandra in the sterile lobby of Crowe’s firm — “Is this what you went to law school for: To be a prop?” — it’s hard not to have second thoughts about the defense attorney’s movives.

THE BOXER |  As Naz checks in to Rikers and tells a corrections officer that he’s got no gang affiliation, her response is ominous: “In that case, good luck to you.” Once he’s put in the general population, though, Naz winds up on the radar of Freddy (The Wire’s Michael Kenneth Williams), a former boxing champ who’s at the top of the pecking order at Rikers, thanks to his money, his strength and his connections in the streets.

When Naz is awoken by a trio of terrifying inmates asking, “you rape that girl?”, Freddy sends him a pair of shoes (“for traction,” explains Naz’s next door neighbor). And this leads to the longest, most tense/terrifying shower scene ever. Please tell me I wasn’t the only one pleading with Naz from my couch to just do a quick lather and rinse — with no repeat. 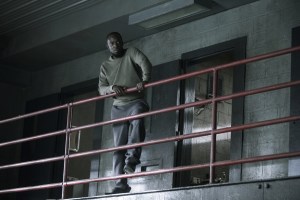 Freddy has Naz summoned to his cell, telling him the nature of his crime means he’s “a celebrity here — not the good kind” and that Rikers is a “whole separate judicial system. You’ve been judged and juried — and it didn’t come out good for you.” There’s a deeply unsettling interlude — I think there are sexual undertones to it, though I’ll admit I was so squicked out, I can’t be certain — in which Freddy makes Naz close his eyes, hold out his hand, and feel a piece of veal. It’s an animal that “stays in a dark crate, half blind in the dark, waiting to die,” Freddy purrs, before finally getting to the point: “Do you want my protection?” When Naz fails to respond — and then tells Dude on Adjacent Cot With Insane Knife Tattoo on His Face that he’s rejecting the deal (whatever it entails), his cot gets set on fire, with pretty much everybody in the joint snarling at him with murderous rage. To quote the great philosopher Lucille Bluth, “This does not bode well.”

IN OTHER NEWS… Naz’s dad fesses up to his cab partners that their vehicle is stuck in an impound lot – but all they learn when they go to pick it up is that it’ll likely be locked away until a trial ends (possibly longer if there’s a civil suit). The helpful impound cop tells the partners their best bet might be to file grand-theft auto charges against Naz — and he gives ’em (coincidence alert) Stone’s card as a referral. Did I mention someone’s snapping pics of Naz’s dad as he goes about his day? Or that the media have dubbed Naz the “Brownstone Butcher”? Or that Det. Box has those beat cops re-writing their “night of” reports. The male officer needs to leave in his story about vomiting at the scene, too, since it’ll help the jury understand the gruesome nature of the crime. “Nasir Khan looks like any other college kid,” he explains. “We have to fight that.”

What did you think of this week’s The Night Of? Is Nas better off with the new lawyer? And what’s Freddy’s end game? Sound off below!