Heading into what promises to be an action-packed finale next week, Preacher’s penultimate episode was all about its couples, from Jesse and Tulip to DeBlanc and Fiore. Which ones took turns for the better, and which took turns for the much worse? (R.I.P., name withheld!) Read on and find out.

NEXT STOP: HELL | After a past-tense opening that found The Cowboy laying waste to everyone in Ratwater’s saloon, “Finish the Song” jumped to the present day, where Jesse cut short Sheriff Root’s story about how little a child killer like him was going to enjoy prison by escaping from custody. Meanwhile, Fiore and DeBlanc decided — via a coin toss — that, rather than go to hell to resolve their situation, they’d bite the bullet and call heaven. Unfortunately, when they weren’t looking — dagnabbit! — Jesse had stolen their hotline to invite God to All Saints’ that Sunday. Left with no choice but to head south, the angels booked passage through what at first appeared to be a run-of-the-mill travel agency. (Was it just me, or did you get an extra couple-y vibe from the duo this week? Between Fiore’s anxiety about the possibility of heaven separating them forever and the sweet way that DeBlanc called him “my dear” when he wasn’t allowed to take his comics to hell, they sure seemed like more than colleagues.) 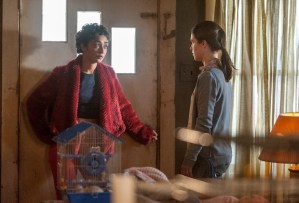 MANWICH | Before leaving Uncle Walter’s and heading for Albuquerque to exact her revenge on Carlos, Tulip stunned Emily by revealing that Cassidy is a vampire. Oh, and BTW, while Jesse’s ex was gone, Emily was in charge of feeding the blood-sucker hamsters and such. Just “don’t go to Pet Express,” Tulip advised, “’cause they’re on to me.” When Emily said that Jesse was in hot water, Tulip insisted that she didn’t care, the single mom could have him. In turn, Emily swore she didn’t want him, as she already had a boyfriend — Miles. “He’s cool,” she added. (Ha.) Later, after watching the Psycho scene in which Norman discusses “private traps” with Marion, Emily lured Miles to Walter’s and fed him to Cassidy. (Da-amn! Somebody must have read my comment at the end of last week’s recap.) While all this was going on, Root was called to the Sundowner, where he found the seraphim disarticulated in the tub. “Kill me,” she pleaded. And, when the sheriff took pity on her and strangled her, she, of course, regenerated intact.

BYGONES | By the time Jesse came by Walter’s looking for Tulip, Cassidy was finally beginning to heal. Not that he wanted to see his former bestie. “Go, Preacher,” the vampire said. “It’s not safe for you here.” Inauspicious as that sounded, it wasn’t long before the duo had buried the hatchet (along with Miles). Cassidy wasn’t even pissed that Jesse had let him catch fire. “You put me out,” the Irishman noted. “That’s what matters.” Apparently, somewhere along the line, Jesse had had an epiphany about Tulip, too. So he called to tell her that for him, “it’s just you till the end of the world” — just as she was about to take a meat tenderizer to Carlos. Next, the buddies dug up DeBlanc and Fiore’s “clones” in order to obtain the angel hands Jesse needed to operate the hotline to heaven. Speaking of the angels, as the hour drew to a close, they arrived in hell… which turned out to be Ratwater, where The Cowboy was doomed to relive his nightmarish existence for all eternity. Or was he? “You wanna be free of all this?” DeBlanc asked. “We have a job for you.” Killing a preacher, Fiore explained after his partner was shot. (Man, they get shot a lot.)

What did you think of “Finish the Song”? Were you more shocked that Emily murdered Miles or that Jesse finally admitted that Tulip was The One? Hit the comments.