This week on Mr. Robot, Elliot’s latest “escape” attempt was one he could barely stomach, a second death rattled fsociety’s ranks, Angela was presented with quite an opportunity and Agent DiPerro made an effing discovery.

Coming off of the two-hour premiere’s somewhat indulgent pacing, Episode 3 managed to be both beautifully crafted, at-times haunting/disturbing and yet also plot-stirring — right down to the final “light bulb” moment.

Following an engaging cold open in which, in flashback, Romero is courted by Mobley to join what will ultimately be dubbed fsociety (after the former regales us with the arcade’s very dark origins), we get a brief continuation of Elliot’s phone call with Tyrell. Elliot tries to ascertain Wellick’s whereabouts, only to be told he is “not yet where I’m supposed to be,” but “very soon” will be. Tyrell fondly reflects on “that night when we became gods,” but the call is ended, by Mr. Robot, before Elliot can learn more about what happened after he last recalls seeing Tyrell.

Elliot’s plan this week is to silence Mr. Robot by loading up on Adderall procured for him by Leon. That catapults us into a highly twisted sequence, in which ominous dudes in a black Explorer grab and bag Elliot, then drag him to a garage and funnel cement into his throat. Elliot in turns vomits, not in that garage but at home at the foot of Mr. Robot, who compelled him to expunge the Adderall. Elliot is so desperate and determined, though, that he scoops back up the soggy pills and consumes them anew, successfully erasing his taunter.

Alas, the amount of Adderall needed to keep Mr. Robot at bay has adverse effects on Elliot, robbing him of sleep to the point that he “wants to cry” over Gideon’s death but is so high he can’t. Then, when he runs out of pills and starts to crash, he turns into a speechifying questioner of all things religion at his “church group meeting.” Launching into a rant, he asks why God didn’t help his innocent friend, why He stops neither the wars in His name or the “racist, sexist, phobia soup” society dwells in. “F–k God,” Elliot concludes. “He’s not a good enough scapegoat for me.”

Later, Ray — who despite having ordered a beatdown is unable to get his go-to computer guru to fix his website (something requiring “migration”) — pays Elliot a visit, relating the story of how shortly after his wife died, he found himself plugging into dialysis and “talking out loud,” crazy-like, to her, in a way his own Mr. Robot. “We’re a lot more alike than you think,” Ray says, pointing out that the idea of “control” is a fantasy akin to a “one-legged unicorn taking a leak at the end of a double rainbow.” “Do you still see him?” he asks of Elliot’s own hallucination. “I can tell the person you write about meant something to you.” And as the new friends sit down to play chess, we see that Mr. Robot has returned, and is looking on.

Elsewhere in the episode, the murder of Romero, on the heels of Gideon’s cold-blooded shooting, has Mobley and Trenton a bit wigged out, but Darlene insists they needn’t fear  any connections being made. Still, Mobley must wonder if Elliot, given “the state he’s in,” might have blabbed; Darlene says she will touch base with her brother. 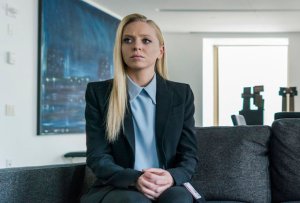 herself being invited to dinner, at a very fancy places, by Price. She dresses up [swooooon] and showers herself with positive affirmations, obviously assuming it would be a date of some sort. Instead, Price introduces her to two other dinner guests, E corp colleagues Saul and Jim. At dinner’s end, Price privately tells Angela of Saul and Jim’s positive, charitable qualities… before revealing that they were complicit in the toxic leak that killed her mother and Elliot’s father. Price produces a disc with all the evidence Angela needs to destroy the men’s lives, saying that while she’s “panicking” right now at the thought, if she removes emotion from the decision, “You’ll do just fine.”

FBI Agent DiPerro was doing much more than fine at the close of an episode which offered glimpses at her sad existence, conversing at home with her “Alexa” and whiling away the late hours with cybersex. Following up on Romero’s murder, she discovers in his mother’s home one of the “End of the World” party flyers, which in turns leads her to the Coney Island arcade… and its broken “F SOCIETY” sign. Having connected the murder and its victim to the Five/Nine hack’s home base, she can only marvel, “You’ve got to be f–king kidding me.”

What did you think of the episode “eps2.1k3rnel-pan1c.ksd”?