This week on CBS’ Zoo, Jamie’s arrival in Caraquet was full of surprises bad and good, while the rest of the team reeled from a loss — and a new discovery.

In fact, there is no Caraquet. At least not anymore, seeing as it is consumed by flames when Jamie and Logan arrive on the outskirts. From there, they are chased by a growling something, yet saved by a mysterious band of people in masks. But worry not, they’re just the kindly members of a group of survivors hunkered down inside a well-fortified school! All is good!

But it’s not. Not at all. Because as we all know, a sought-after postapocalyptic haven is never a haven. No, Jamie and Logan get word from a young girl named Maddie that they would be well advised to run. Alas, community leader Gwen susses out Maddie’s snitching and confirms for the noobs that it’s time to vote on the next “feeding” — as in the human they will sacrifice to the beasts outside.

When the vote targets tattletale Maddie, Jamie volunteers to go with the girl. But before she does, she slips Logan a spray paint canister to lob inside one of the burning barrels by the fence. When he does, the explosion creates a commotion — as well as a breach in the perimeter, through which the pack of polar bears that were about to feast on Jamie and Maddie instead stroll through. Jamie, Logan and Maddie make a beeline for a broken-down school bus, but decline to let Gwen join in their refuge. When the bears surround the bus after mauling Gwen, Jamie braces herself to go mano a bearo, but before she can mix up it, the beats are tranq’d — by Dariela, who has just arrived with, much more importantly to Jamie, Mitch!

Leading up to the team’s riding to Jamie’s rescue… 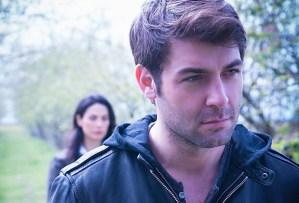 rescued from the gas-filled corridor, and while she had a few gasps left in her on the jet, her fate was sealed. Before expiring, she confirmed Jamie’s location as well as uttered  the words”The Courier” to Jackson. Afterward, Jackson grills Dariela about not having “two seconds” to let Chloe through the door, and then in private he pumps out a few tears. Of the black, oily kind…!?

Later, the jet is commandeered, setting the stage for the dramatic introduction of its owner, Deputy Secretary of Defense Allison Shaw aka Mitch’s stepmom, to whom he hasn’t spoken in 12 years. Allison reveals that her family’s orchard on the West Coast has somehow been crippled by the animals, and they can’t let General Davies know that the food supply is now at risk. In trade for helping her investigate the matter, Allison promises to give the team her jet, no questions asked, as well as everything she knows about 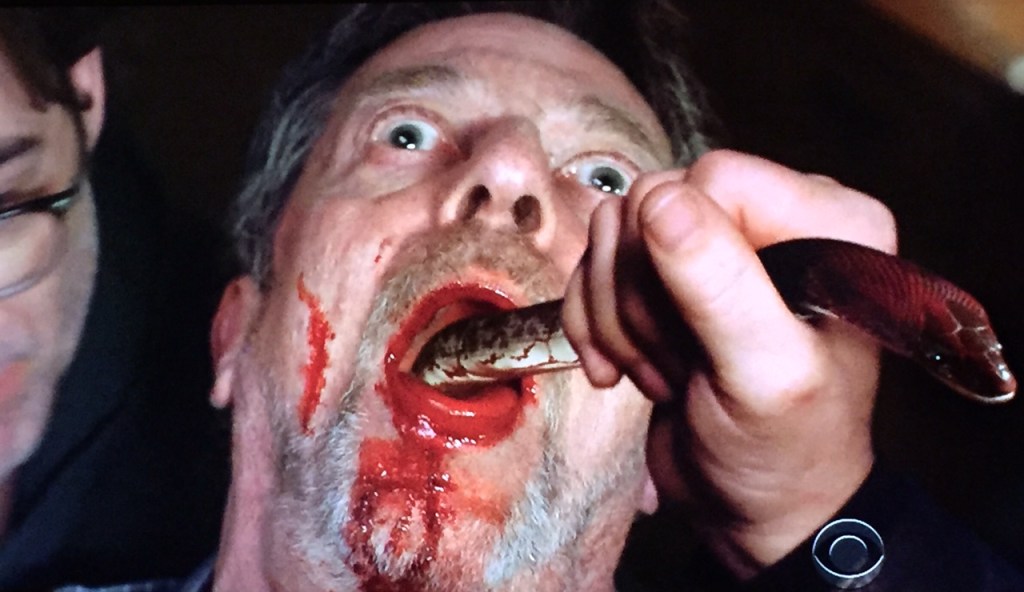 “The Courier.” Arriving at the orchard, it is eventually surmised that snakes are poisoning the water supply, potentially affecting the entire Pacific Northwest. Mitch whips up a serum that will shut down the slitherers’ brains, but ingests (for hasty human testing) his first/only dose, just as a snake escapes on the plane. Jackson volunteers to capture the snake, and sure enough, his infected state makes him immune to the creature — and paves the way for him to ‘fess up to the others.

Mitch explains to the team that they need Jackson around, in that he is the key to the cure, possessing as he does some of the lonnnnng-dormant, non-functional genetic instructions as some of the other animals. If the team can find and study three more types of key animals, Mitch can crack the code and make a cure that eliminates the third DNA helix. Afterward, Jackson invites Dariela to stay with the team — to put a bullet in him if his mutation gets out of hand, she realizes in private.

What did you think of Chloe’s confirmed fate, Jamie and Mitch’s reunion, and the rest of “The Moon and the Star”?