Stranger Things were happening this past weekend for those who sampled and wound up bingeing all eight episodes of Netflix’s new drama series.

Created by brothers Matt and Ross Duffer (who cowrote a few episodes of Wayward Pines) and set in a small Indiana town circa 1983, Stranger Things revolves around the vanishing of a young boy, Will Byers 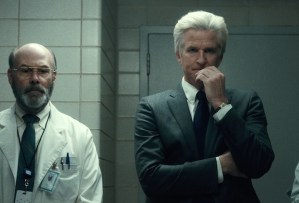 , which comes on the heels of something escaping from a local, “secret” government lab lorded over by Dr. Martin Brenner (Matthew Modine). As Will’s mother, Joyce (Winona Ryder), endeavors to not fear the worst, his pals Mike, Dustin and Lucas tap into their expertise as D&D adventurers to launch a search — during which they stumble upon another of the lab’s secrets.

Elsewhere, police chief Jim Hopper (The Newsroom‘s David Harbour) juggles the discovery of a friend’s “suicide” with (old flame?) Joyce’s growing anxiety over Will’s fate, while the romantic travails of Mike’s big sis Nancy steer her in the direction of the stranger things suddenly going on in Hawkins.

All of the above adds up to a sticky premise for a series, but what about Stranger Things bumped the buzz to a higher level? What drew people in, perhaps for their first binge ever?

Confession: I, for one, am loathe to binge a show. In fact, I have only done it once, in the name of interviewing a House of Cards actor and facing a deadline. But Stranger Things appealed to me in a unique way. In part, it’s because we were talking about “just” eight (versus 13) episodes, which can be comfortably done in two sittings, without feeling like you committed an entire sunny weekend to sitting indoors.

But it was the series’ 1980s sensibility that spoke to me most, having been a teen in 1983 myself. God, those were good times. Fiddling with the latest Realistic gadget from Radio Shack, playing interminable games of D&D (I was a horrible dungeon master), praying you’d get an Atari for Christmas (I had to settle for the Sears knock-off). Stranger Things in a tactile manner tapped into all of that and more, delivering regular nods to movies from that time (and since), plumbing the familiar in a fresh way, the sum of its parts adding up to something immersive — not unlike a heavily salted tank of water.

Here are but a few of the memorable films that The Duffer Brothers (often purposely, as shared in interviews) paid homage to as they crafted this upside down adventure. Big, fat, bold and red spoiler alert!

The Goonies | The very premise of Mike (aka “Frogface”), Dustin/”Toothless” and Lucas (did the bullies award him a rude nickname?) embarking on this increasingly wild journey undoubtedly surfaced memories 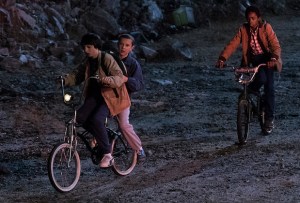 E.T. The Extra-Terrestrial | Though Eleven — who, like E.T., was bestowed with a nickname by her finders — was not an extraterrestrial per se, her story checked many of the same boxes as the 1982 Spielberg heart-tugger, from the scary men in hazmat suits out to capture her, to playing “dress up” as a disguise, to levitating household objects/friends, to using her powers at critical times — though she opts to flip the baddies’ cars instead of float over them. 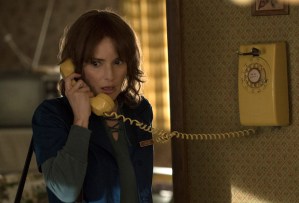 Joyce struggling to carry on a dialogue across dimensional planes with a staticky, far-off Will was very akin to how the Freeling family communicated with Carol Anne through their TV back in ’82.

Close Encounters of the Third Kind | In this 1977 classic, a single mother in Indiana, desperate to retrieve her missing son, is aided by a resourceful andsimilarly invested-slash-obsessed man. Sounds like Joyce and Hopp, to us.

A Nightmare on Elm Street | For one, you had kids trying to summon an ominous entity who was able to reach out to grab you through seemingly latex walls. But also think about the Upside Down world, which with its stark, dark mirroring of humdrum Hawkins was similar to how Freddy would pull us into a topsy-turvy dreamscape. 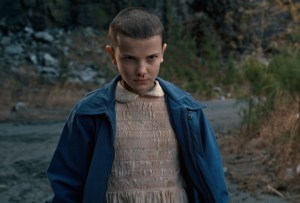 Stand by Me | If the idea of a bunch of young boys setting out on a journey to solve a dark mystery didn’t immediately drum up memories of the 1986 Stephen King adaptation, surely their walk along a railroad track drove it home for you. Rest assured, horrormeister King himself is a fan of the series:

WarGames | Just as Matthew Broderick and Ally Sheedy worked to unravel a conspiracy born of a stealth enemy, would-be sweethearts Jonathan and Nancy teamed to get to the bottom of the mystery that had targeted his brother and her best friend. Speaking of Nancy…

The John Hughes Oeuvre | When not 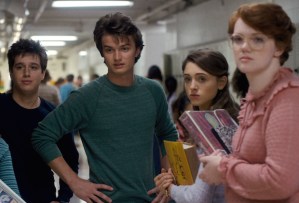 going for surreal scares, Stranger Things served up teen-based angst involving Nancy and dreamy, douchey Steve — who three decades ago would surely have been played by James Spader (while Nancy herself, played by Natalia Dyer, from certain angles is a ringer for Ferris Bueller‘s Mia Sara).

The Thing, Evil Dead | In addition to any thematic nods (including a summonable evil), the seminal horror movies’ posters were among those spied on the kids’ walls.

Mad Max: Fury Road | Though Eleven’s buzzed head was not inspired by Charlize Theron’s Furiosa, the release of the action-film gave ingenue Millie Bobby Brown the nudge she (and her parents) needed to sign off on the extreme haircut, the Duffers told our sister site Variety.

Pan’s Labyrinth | Though more recent than  any of the films cited above, the Duffers worked with Guillermo del Toro’s special effects house to come up with “the demogorgon,” who especially in the early, fleeting glimpses stirred up memories of the spindly Pan’s Labyrinth faun.

Did you binge Stranger Things yet? What did you think? And what past movies did it channel for you?