Those tuning in for the premiere of Disney Channel’s Elena of Avalor will be privy to all sorts of additional Disney magic.

During this Friday’s double-episode debut of the animated series (simulcast at 7/6c with limited interruption on Disney Channel and Disney Junior), viewers will get a first look at at LEGO Frozen Northern Lights, Disney Channel’s upcoming short-form series featuring the blockbuster film’s original voice cast as Anna, Elsa, Olaf, Kristoff and Sven.

Elena‘s fast friends will also get an exclusive first look at the Disney feature film Pete’s Dragon (in theaters Aug. 12), a fresh trailer for next year’s Beauty and the Beast (accompanied by comments from star Emma Watson), and a teaser for Descendants 2 (the DCOM sequel arriving next summer). 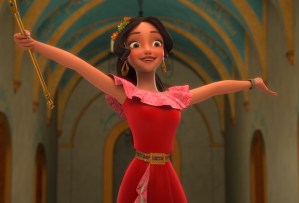 enchanted fairytale land, Elena of Avalor tells the story a brave and adventurous teenager (voiced by Aimee Carrero) who has saved her kingdom from an evil sorceress and must now learn to rule as crown princess until she is old enough to be queen. As Elena’s journey unfolds, the stories will incorporate influences from diverse Latin and Hispanic cultures through architecture, traditions, food and customs.