What this week’s The Night Of lacks in plot development, it more than makes up for in terms of nameless dread and nagging questions — and I say that as nothing but a compliment.

As Naz struggles to follow the One Simple Rule for Helping His Eczematous Lawyer — not spilling any more precious beans to the “Subtle Beast” Det. Box — he samples a pu pu platter of holding-cell horrors, suffers an expected (but devastating) blow in court, and finally gets shipped off to Rikers Island. (And if hours upon hours of Law & Order reruns have taught us anything, that downgrade in accommodations will probably lead to a beat-down or worse for our wide-eyed protagonist.)

While we fret along with Naz’s parents about the competence of his counsel, the sketchiness of his story and the unlikelihood that he’s getting three square meals a day, here are just a few queries bouncing around in my brain now that the credits have rolled:

* What’s that deer head got to do (got to do) with it? Or is “deer head” the new “red herring”? (It did get swabbed by the CSU techs, though, so maybe it will yield something interesting — although probably not a Scooby Doo-esque set of guilty human eyes peering out from behind it.)

* Might those weary beat cops be the key to Naz’s salvation? (Maybe wishful thinking, since I dig ’em both, and I’m hoping we’ll see more of ’em.)

* Did the stepdad do it? And even if he didn’t wield the blade, might he have possibly ordered the hit?

As you ponder other mysteries and potential clues, allow me to recap the action from Season 1, Episode 2: 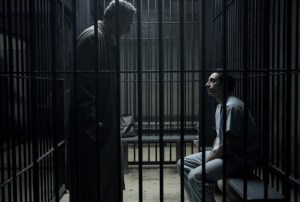 THE ITCHY AND SCRATCHY SHOW | I like this Jack Stone guy — even if he digs at his foot-based eczema with a chopstick in full view of his fellow subway riders. That said, there are some question marks about whether or not he’s ready to handle a case with stakes as high as Naz’s. He’s wily enough to know Naz will be painted as a “heavy-breathing, knife-wielding, sex brute” and his advice to Naz to remain silent at all times seems sound. “You need to know what happened,” pleads Naz, but Stone sees it differently: “I need to be flexible.” When the attorney arrives in court and empties a horrifying amount of detritus and randomness from his pants pockets, though, I can’t shake the fear that Box is right that Stone is out of his league. Still, while his polish and timeliness are questionable, Stone’s intuition seems finely tuned. “Something in your gut isn’t liking him for this,” he says to Box… and as much as the detective brushes it off, some semblance of the idea appears to stick to his shoulder. (More on that in a moment.) In other news, we learn Stone has a son — and an ex-wife who can’t hide her shock that Stone’s landed such a high-profile murder case. 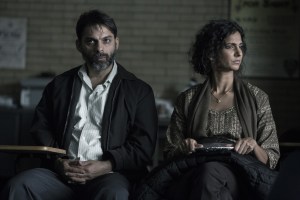 THE GOOD PARENTS | Naz’s mom and dad spend the hour searching for the precinct from which their son called them, then trying to convince someone, anyone to let them see their son (while trying to ignore the casual awfulness of one cop noting that “some Muslim freak carved up a girl in the Two-One”). When Box arrives, he puts on a show, acting like the benevolent public servant who can’t see the harm in letting them have an audience with their boy, who drops groaners like, “a mother’s prayers never hurt anyone.” But Naz has been prepped well by Stone, and while he makes the mistake of repeating his “I can’t remember what happened”/”I fled because I was scared” story, he quickly switches to Urdu to tell them “I’m not talking to [Box] anymore.” Naz’s refutement of his mother’s thought that Box “seems like a nice man” – “he’s a subtle beast,” says the student/suspect — hits home at the end of the hour when Box and his team toss the Khan residence looking for clues, confiscating not only Naz’s laptop but his parents’ computer, too. 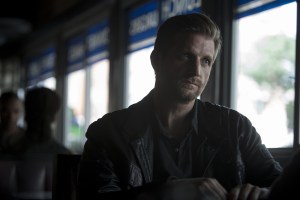 THE SUSPICIOUS STEPDAD | When the police contact Andrea’s next of kin, Don Taylor, it’s clear the man on the other end of the phone (The Girlfriend Experience‘s enigmatic Paul Sparks) has taken many a call from the cops about the troubled young woman. But he acts a tad peculiar himself when he shows up at the station to look at photos of her corpse and give a positive I.D. Don deliberately points out that Andrea was his stepdaughter — not his daughter — and initially claims the photo is someone else, but changes his story (“It’s her”) once it’s clear he’ll have to go look at the actual body in the morgue. We all react to horror and grief in different ways, but dude is almost bizarrely robotic throughout the encounter, no? A subsequent “spontaneous” interview with Box reveals Andrea’s checkered history with drugs and dudes — at least as Don saw it — but also clues us in to the fact that Andrea’s three-story Upper West Side pad was inherited from her recently deceased mother, while Don is now residing in Queens. Could this murder all come down to greed/jealousy over an inheritance? That seems like a stronger motive than Naz’s, for sure. 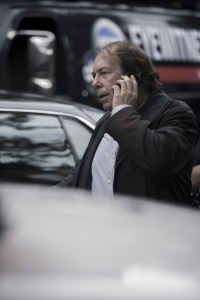 THE CASE CONTINUES | We learn from Stone that Box is the kind of detective who “rolls up his sleeves, delegates nothing, takes everything personally.” That might not be good news for Naz, who can’t even get his head around why Stone won’t listen to his story of what happened on the night of Andrea’s murder. “The truth doesn’t help you,” Stone says. “If you can’t get that through your head, you can forget about the rest of your life.”

Box, though, also tries to get into Naz’s head, reminding him that “the longer it takes [to get through a trial], the more [money that Stone] makes” and giving the imprisoned young man his asthma inhaler. “What am I not seeing, Nasir?” Box asks, before trying to prompt the kid with a backdrop of “things just got out of hand. Help me help you.” Christian, Jew or Muslim, the detective adds, “there’s an immense sense of relief when they let go and finally tell the truth.” Naz admits that “It looks like I killed her,” but self-preservation eventually takes hold: “I’m not talkin’ to you anymore.” And thus, with a quickie confession off the table, Box writes the word “homicide” on the white board next to Naz’s name, gives him a navy blue “Harvard” t-shirt to slip on, and sends Naz to a terrifying group cell (complete with one angry dude repeatedly kicking a jonesing, vomiting addict in the gut, and another inmate being forced to remove a smuggled cellphone from his rectum) to await arraignment.

In court, Naz pleads not guilty, but despite Stone’s blustering and excitement in the spotlight, the judge rules against bail. In the final, spectacularly cinematic moments of the episode, Naz is loaded onto a prison bus, driven to Rikers, and descends into the darkness of the terrifying facility.

MEET THE D.A. | The District Attorney for Nas’ case is my kinda TV character: She leans against a cement wall smoking by herself. She’s cynical, a little wry, and she definitely doesn’t want to get stuck with a stinker to muck up what’s probably an excellent batting average. Her pow-wow with Box, to hear the evidence/lack of confession he’s got, goes like this.

So, does the blink mean anything? Is Dennis, honey, uncertain about the case he’s building? And will Naz end this series a free man or ultimately get convicted for a murder he probably didn’t commit? Share your thoughts in the comments?