Oh, Mike. Don’t you know that, in prison, you can’t trust anyone?

Suits‘ faux lawyer got off to a rocky start in his new jailhouse digs during the Season 6 premiere on Wednesday night. Mike thought he had made a friend in his roommate Frank (Nurse Jackie‘s Paul Schulze), but the sneaky fellow prisoner was just pretending to be his roomie in order to get intel. Now, Frank knows Mike’s story and has Rachel’s phone number, both of which he plans to use to get payback for Harvey putting him behind bars.

On the outside, Harvey, Jessica and Louis were free but not faring much better, as a hailstorm of lawsuits rained down on Pearson Specter Litt.

Below, executive producer Aaron Korsh previews how long Mike will stay incarcerated, who is his real cellmate and how the partners will fight to keep their firm alive.

TVLINE | Do you feel like the season premiere assuages any concerns fans may have had about Mike easily and quickly finding some way out of prison?
Some fans might have had fears, other fans might have had hopes. We’re not going to undo it super fast. He’s not going to be in there for the rest of the series, I don’t think, but he’s not going to get out in the first few episodes of the season. Some fans, that will assuage their fears. Other fans, that will make their fears reality. But we think there’s an interesting story to be told with Mike in prison, and we’re going to tell it.

TVLINE | You certainly set up an interesting conflict with the fake roommate who actually wants to get at Harvey through Mike. How awful can this Frank guy make Mike’s life in prison?
We establish in the first episode that he’s a little sinister, based on having a long-standing grudge against Harvey. Information about that will come out over time. We’ve established that the guards are corrupt. He’s got at least one of the guards in his pocket. He’s been able to get Mike’s roommate out of his cell. He’s a pretty powerful, vengeful guy. He’s obviously got a lot of intelligence and the ability to pretend he’s a nice guy when he’s really not. Mike’s in for some trouble, and that’s sort of the organizing principle of Mike’s experience in prison. 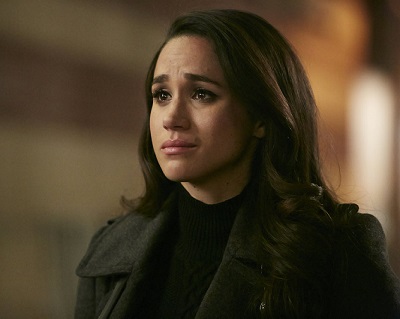 TVLINE | Can he really affect Mike’s loved ones on the outside? He threatens Rachel, but what can he do from prison?
There’s a number of things I would say to that. One is, obviously, he could have someone that is not in prison do things for him on the outside. That happens all the time, and the threat of that might come in more later. But more importantly, he can wreak some mental havoc on Mike or his loved ones. He could call her, he could harass her, he could intimidate her, and that’s going to mess with Mike’s mind, just like messing with Mike would pray on Harvey’s mind. It’s more of a mental mind game thing, currently, but we’re going to see what he can do over time.

TVLINE | Will Mike find any allies in prison?
Yes, Mike will find an ally. He’s resourceful, he’s intelligent, and he’s not without his own attributes to aid in surviving here, and he’s got some friends on the outside. The season is somewhat about Mike navigating his way in there while he’s got someone that’s out to get him.

TVLINE | What is his real roommate (played by ER‘s Erik Palladino) like? Is he friend or foe?
That is going to be developed over time, but I will say this: Imagine you’re Mike and this has happened, and then the next day, you meet the guy that let Frank do that. You’re not going to trust that guy at all. I wouldn’t. That’s the start of their relationship, and it’s going to progress from there.

TVLINE | How long is it before someone, be it Rachel or Harvey, comes to visit Mike in jail?
It’s interesting that Rachel can’t go for a month, but we sort of speak to that a little bit in Episode 2. We will see Rachel go to prison to visit Mike. I’m using those words very carefully. In the course of the season, we will absolutely see [friends and loved ones] having interactions with Mike, because they can visit him. 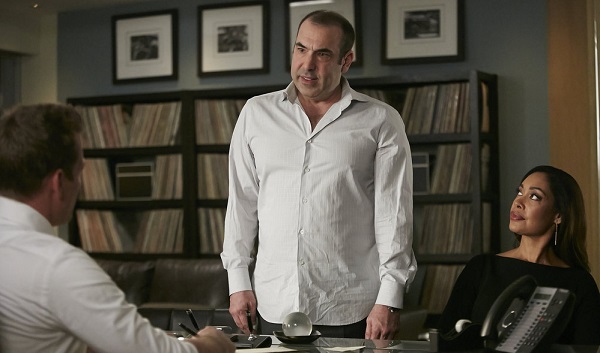 TVLINE | Let’s turn to what’s happening at Pearson Specter Litt. What are Harvey, Jessica and Louis’ next steps in trying to get the firm back on its feet?
At the end of Episode 1, they’re like, “We’re going to use the partner money to pay off these lawsuits.” They’re going to attempt to institute their plan in Episode 2. It has a couple of twists and turns… They have to figure out how they’re going to survive moving forward in the aftermath of whether that plan does or does not work.

Suits fans, stay tuned to TVLine for more scoop. Until then, grade the season opener via the poll below, then hit the comments to back up your pick!