If you were seeking an ever-intense examination of Elliot Alderson’s current, out-of-sorts psyche as USA Network’s acclaimed Mr. Robot opened Season 2, you had to come away quite satisfied.

But if you were hoping for answers about Tyrell Wellick’s fate and/or Elliot’s “missing” three days, or a follow-up on the connection between White Rose’s male persona and E Corp CEO Phillip Price, you got nary a thing.

Elliot, to his credit, has made tremendous strides in the name of keeping a level head — to maintain “control” as he frequently reiterates, to “stay as sane as possible” until Mr. Robot leaves him — in the wake of the Five/Nine hack he realized had been executed in his absence/”absence.” He lives an extremely regimented life, crashing with his mom and sticking to a daily itinerary, including meals with his new, Seinfeld-obsessed friend Leon (played by Joey Bada$$) a 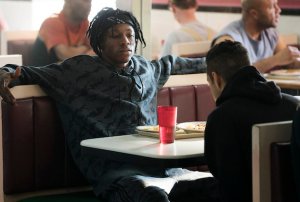 Elliot is journaling each and every moment that he can, so as to minimize if not eliminate any future “gaps” in time. That includes taking copious notes of his clashes with Mr. Robot, who cannot help but taunt his host about his methodical mission to steer clear of computers. So heated do the duo’s debates get, apparently every time they end with Elliot successfully daring Mr. Robot to put a bullet in his brain, though E always “survives” (yet sports a bandage for good measure).

Alas, despite his efforts, Elliot’s world starts to unravel some toward the close of the second hour, when Ray mentions having met up with him, probably about a hack-related job — and yet Elliot has no record of it in his journal. That disconnect leads to an intense face-off with Mr. Robot, whom Elliot deduces spoke to Ray. “When people see you coming…. I’m going to make you realize… that they see me,” Mr. Robot says, triggering in Elliot an outburst of gradually maniacal laughter. With that gun yet again aimed at his forehead, Elliot challenges his other self to “tell me where Tyrell is… or shoot me again. Because the only one who’s going to drive mad is you, not me.”

And what of the rest of fociety 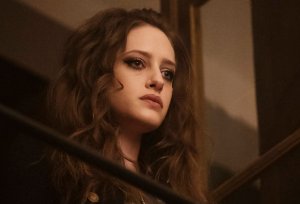 and others from Elliot’s insular orbit? Darlene pulls an Axel Foley and commandeers the nifty smart home of E Corp general counsel Susan Jacobs (Hostages‘ Sandrine Holt), to serve as the troupe’s new base. Romero and Trenton are MIA, having always been “half in,” Darlene grumbles to Mobley, but support for the rebel cause is flourishing in the wake of the hack. In fact, the new recruits are a bit overzealous, sawing the bronze balls off Wall Street’s Charging Bull (and then posing for selfies with their prize), prompting their new boss to snap. Simply said, Darlene is, amazingly, dissatisfied with the results of the hack. “We are in a war and we are on the losing side of it,” she explains to Mobley. “What we did made it worse, not better. We didn’t finish them off.”

As a first step in finishing them off, Darlene sends ransomware to E Corp, threatening to “brick” their entire system — thus shutting down a bank for an unspeakable amount of days — unless a chief officer delivers $5.9 million to Battery Park. CTO Scott Knowles offers to be the bag man, only to find that once at the drop, he is instructed to dump the sack of cash and set fire to it (whilst wearing the Guy Fawkesian Mr. Robot mask).

When Knowles does exactly that, 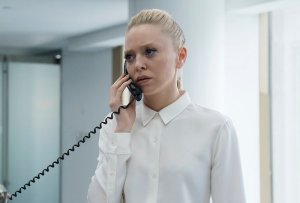 the action turns to Angela, who now is persevering as an up-and-coming PR whiz for E Corp. After that public incineration of a small fortune, Angela savvily juggles multiple interview bids, leveraging them all against each other until one — Bloomberg — bows to her terms, meaning: No questions about the ransom, and only one, hand-picked inquiry about Plouffe’s on-camera suicide. But so much is still missing from Angela’s life, holes she tries to fill with random hook-ups and “positive affirmation” infomercials.

As for Angela’s former boss, Gideon could not keep AllSafe (or his marriage) above water after the E Corp hack, “vanished debt” be damned. (Nor was he able to convince Elliot to “do the right thing” and admit he was behind the hack.) Goddard’s arc is seemingly wrapped up toward the premiere’s end, when a “fan” confronts him in a bar… and then shoots him in cold blood “for our country,” condemning him as no innocent “patsy” in the financial crisis but a premiere “crisis actor.”

Elsewhere in the premiere, Price was pressured by the feds to resign, before POTUS could proffer another bailout, but he effectively argued a case for staying put. We also briefly met Dom Dipierro (played by Grace Gummer), the FBI agent assigned to root out Five/Nine’s true perpetrator.

What did you think of Mr. Robot‘s Season 2 opener?