Did the CBS promo guy dupe us all?

Promos for this Tuesday’s Zoo warned us that by the end of the episode, “one of these people won’t survive.” And based on the flurry of faces that flashed on-screen, I surely was not alone in deeming General Davies as disposable.

But was team member Chloe the actual casualty…?

This week’s hour found Mitch, Oz et al in pursuit of a Phase 2-mutated sloth that may have played a role in an earthquake, by generating an extremely guttural growl. Hacking into a satellite, Chloe tracks the sloth to a building in Vancouver… which then begins shaking and quaking, and ultimately collapsing to the ground — but not before Davies and his goons flee with the critter.

The cause of the collapse: extremely industrious moles, working in concert (?) with their sloth pal.

The team then tracks the sloth to Reiden HQ, where they plot to infiltrate a fancy party and “steal” a scientist’s heart print, to gain access to a secure lab area. Amazingly, everyone — even newcomer Dariela — is able to very quickly pull together party-appropriate attire (and piecey up-dos). When the plan to slip the sci guy a mickey goes south (Mitch’s says it “shoulda worked,” based on his experience with… a llama), Dariela gets the idea to steal (using a handheld mic) the general’s heart print. Thing is, he saw her on last week’s particle accelerator security cam, so that jig is quickly up. But Dariela pulls a gun (from a, ahem, thigh holster) and forces the general to get them into the secure area. 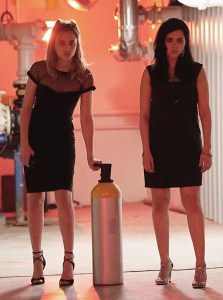 and Oz go one way, to find the sloth, while Dariela and Chloe go the other direction, where they find the two gasses that figure into the uber-deadly Noah’s Objective: one toxic, the other a stabilizer. A gunfight with Davies’ soldiers ensues, and Dariela does a nifty job of picking them off — but not before a stray bullet pierces the tank of toxic gas. Chloe does her best to follow Dariela out the air lock to safety, but she is too slow, and gets trapped inside, to die.

To die, after having just told Oz she loves him.

To die, unable to relay the message that Jamie headed to Caraquet.

Then again, does Chloe have some life left in her, based on next week’s promo? Or is that just taunting us with her last few dying breaths?

What did you think of this week’s Zoo, and Season 2 to date?