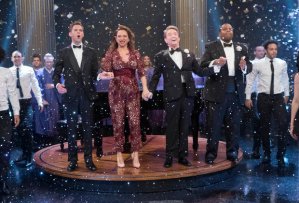 Before closing up shop altogether, Martin Short and Maya Rudolph were joined by featured players Kenan Thompson and Mikey Day for a song-and-dance number aptly titled “We Did This Together.” The performance served as a fine sendoff for the variety program which never quite overcame its initial growing pains, but helped fill the SNL-sized void in our hearts for at least part of the summer hiatus.

Lo and behold, our picks for best and worst sketches:

BEST: CALL YOUR GIRLFRIEND
Stone and Rudolph slayed an a capella cover of Robyn’s “Call Your Girlfriend” inspired by Swedish vocal group Erato. The duo was accompanied only by handclaps and empty butter tubs as they harmonized their way through the single most enjoyable segment of Season 1.

RUNNER-UP: SUPERCLEAN COMMERCIAL
We were already sold on this sketch by the fourth or fifth time Stone, Rudolph and Thompson asked for that 1-800 number. When it eventually tied into one of our other favorite sketches of the season — a commercial for the law offices of Barnes and Son — we were jazzed to see just how strained the relationship between father and his adopted child had grown since we last touched base with them.

WORST: BURT CASSIDY: GAY DETECTIVE
Hayes had nothing to work with here: A sketch made to look like a 1940s film noir about a gay detective who cared more about fashion faux-pas and Cosmo questionnaires than he did about solving the case of Rudolph’s missing husband.

WORST: JIMINY GLICK’S CELEBRITY SENSATIONS
Poor Kelly Ripa — hasn’t she been through enough this year!? Though you’d assume Short would have mined humor from the highly publicized exit of her former Live co-host Michael Strahan, the sit-down instead relied on tasteless jokes about the size of her breasts and the potential deportation of husband Mark Consuelos under a Donald Trump administration. Worst of all was when Glick asked Ripa about working with Regis Philbin for 11 years, which quickly escalated into a discussion about all the sex they must have had. She replied that it was “OK,” but she was asleep through most of it. (We’ll let you interpret that one.)

What did you think of Maya & Marty‘s grand finale? Should NBC renew the variety show for Season 2? Weigh in via our polls, then sound off with a comment.