No two ways about it — what Jesse did in last week’s Preacher was bad. Like, real bad. (If you missed the pivotal hour, catch up here.) But the things he did in this week’s episode, since they were deliberate and just plain mean, were arguably even worse. What the hell did he do? Read on…

ONCE UPON A TIME | Through a series of flashbacks, “He’s Gone” revealed that, when Jesse and Tulip were kids, she lived with him and his dad, John — but only briefly. Though she behaved herself as well as she possibly could, the elder Custer still had the little girl hauled away by the Department of Human Services. Why?!? a horrified Jesse demanded to know. “’Cause she’s an O’Hare,” his father replied. “There’s always gonna be trouble.” In a rage, Jesse that night asked God to kill his dad and send him straight to hell — and lo and behold, the Lord answered his prayer: After making the boy promise to be one of the good guys, John was murdered before his eyes.

FOOD FOR THOUGHT | In present-day Annville, Cassidy, having witnessed Jesse banishing Eugene to hell, tried to broach the subject with his buddy — not judging, the vampire made it clear, just eager to help. Before they could get into it, however, Emily pulled the reverend away, and Tulip came in with plans to cook dinner. (A woman after my own heart, her daring menu included such delicacies as, erm, vanilla hash browns.) Left alone with his one-night stand, Cassidy asked her why, if Jesse was her boyfriend, she’d made love with him. (And yes, adorably, he did say “made love,” not “shagged,” “banged” or any of the terms you’d expect him to use.) Alas, she shot back, “I didn’t,” then suggested that the blood-sucker and his pal didn’t know each other as well as he thought they did. For instance, she rightly guessed that Jesse wasn’t aware that Cassidy is a vampire. To prove he did so know the preacher as well as he knew the back of his hand, Cassidy blabbed that Jesse has the power to make people do whatever he wants. (Not that Tulip bought it, mind you.) 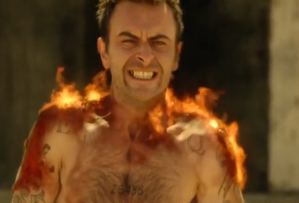 ALL FIRED UP | Later, Odin dropped by with a deed of transfer for the church and its land. Since he hadn’t been converted by Jesse’s sermon — not for real, anyway — he understandably figured he’d won their bet. When regardless Jesse refused to sign on the dotted line, Quincannon promised to return. (Which, at the hour’s end, he did, riding a bulldozer and accompanied by an army of QM&P employees.) Off that tense talk, the preacher sat down to an incredibly awkward dinner with Cassidy, Tulip and Emily. Just as Tulip finally asked, “What the heck is going on?!?” Sheriff Root interrupted, looking for Eugene. After mentioning that yes, the teen had visited Jesse the day he went missing, Emily covered for her crush by lying that she’d also seen Arseface leave. Once the sheriff departed, Cassidy took advantage of a moment alone outside with Jesse to confront him about his nonchalance over Eugene’s situation. In response, the reverend said that the boy had been no innocent — when Tracy had rejected him, he’d blown half her head off, then tried to kill himself, too. Would Jesse be so uncaring about Cassidy? To find out, the vampire tossed him a fire extinguisher, removed his shirt in the sunlight and asked, “Will you let me burn, too?”

SECONDS, ANYONE? | Returning to dinner — sans Cassidy — Jesse lashed out at Tulip for being in the know about the Irishman’s vampirism. From there, he just got nastier and nastier till at last he gutted his old flame by asking, “What are you even doing here?” After she beat a hasty retreat, her heart in pieces, Emily confessed that , ever since Jesse returned to Annville, “I’ve just believed in you.” His cruel response? “Well, that was stupid.” Luckily, there did seem to be at least some hope for the Genesis-fueled preacher: When last we saw him, he was tearing up the floor of the church as if attempting to dig his way to hell to retrieve Eugene.

So, what did you think of the episode? You don’t really think Jesse would let Cassidy burn — that was Genesis’ doing, right? Hit the comments.