Syfy’s Killjoys are back in action, having reunited with D’Avin, unearthed new questions about the mysterious Khlyen and made a couple of friends (in Clara and “Alice”) in the Season 2 opener alone.

TVLine invited Aaron Ashmore, who plays Johnny Jaqobis, to weigh in on the sci-fi series’ appeal, its expanding cast and the new baddie that Lucy’s crew is about to unpleasantly meet tonight at 9/8c.

TVLINE | All things being relative with sci-fi shows, why do you think Killjoys has caught on the way it has? For example, I obviously don’t have time to watch everything, but I make a point to watch every Friday night.
I think there are a couple of things at play. One, this sort of sense of humor and fun that it has differentiates it a bit. Two, I think the world-building on the show is incredible. And [series creator] Michelle Lovretta has spoken about how one of the themes that she really enjoys is that this is like a second family or a chosen family, and people really, really relate to that in the sci-fi genre. I was on Warehouse 13, and that was what made that show successful, too, this idea of a family that we decide to stick with.

TVLINE | The cast photo for Season 2 now has Pawter (played by Sarah Power), Pree (Thom Allison) and Alvis (Morgan Kelly) in it. Are we going to be spreading the wealth a bit more across a wider array of characters as the season goes on?
We absolutely spend some more time with those three characters and get more of their background. They’re also integrated into missions with us, becoming a bigger part of our trio. Like, obviously last week Pree was along for the ride….

TVLINE | Which was pretty hilarious.
Yeah! And that’s sort of what happens a bit more this season. As Killjoys, we’re using and drawing on our friends in the Quad to help us.

TVLINE | What do you like most about Johnny?
I really like his sense of humor, I like his sense of compassion. I like that he’s a bit of a nerd, which is interesting in contrast our other characters who are a little more badass and a kickass.

TVLINE | He’s relatable in that way. If I’m not built like Luke Macfarlane….
No, there are very few people in this world built like Luke, and that’s why it’s also very interesting to watch it ,because I think a lot of people are in awe of that. [Laughs] There’s a funny little thing that Luke and I were talking about, a drinking game where every time D’Avin has his shirt off in a scene, you have to do a shot. Depending on what episode it is, you could be very drunk very quickly, or not so much.

TVLINE | And if Aaron Ashmore could give Johnny one piece of advice, what would he tell him?
Oh, that’s a really interesting question. I’d say to just believe that everything’s going to be OK, because I think John sometimes stresses out about his place in the team, especially in the first season. He should just  stick true to his guns and his moral compass, and it’ll all work out OK.

TVLINE | I have to reckon 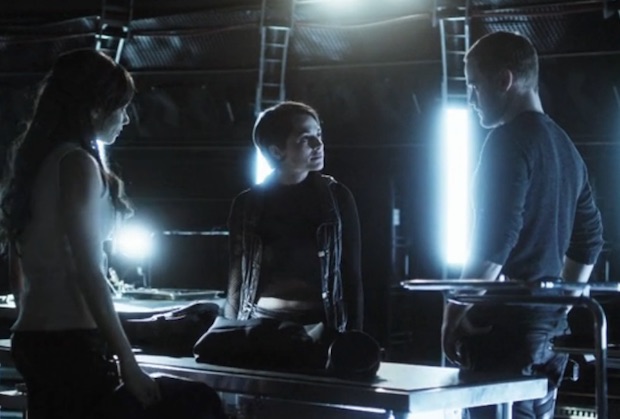 he would want Clara (Defiance‘s Stephanie Leonidas) back sooner rather than later.
Well, Johnny’s a ladies man. He loves ladies and he loves technology…

TVLINE | I know, but I felt something special happening there, especially in their good-bye scene.
It’s interesting sometimes. On the page it wasn’t necessarily super-flirty, so I think that when we started playing that scene, at least in my mind, that’s sort of where I went. I was like, “Oh, yeah. John would be very interested in this woman.” But there were flirtations with Dutch and Clara a bit, too, so maybe that’s the tone of the show. But yeah, I think that a lot of things about Clara attract John, who likes to fix things and fix people. Obviously she had a rough past, and obviously there are things that are hurting her, this technology stuff…. She may be back, by the way. Stephanie is fantastic, so yeah, we’ll keep that open, that she definitely may return.

TVLINE | Starting this Friday and moving forward, what’s the Killjoys’ game plan? Are they going to try to get Old Town back to how it was? Will that be a season-long process?
First of all, we’re obviously going back to try to save our friends — Pawter and Alvis are still in Old Town, we hope. The Company bombed the hell out of it, so we’re going back to assess the situation. Also, the Company’s put a wall around Old Town and we’re not exactly sure why they’re doing that. To what purpose, if they bombed the hell out of it? So there’s sort of mystery.

TVLINE | And I have to imagine that to chip away at each layer of that mystery, there’ll be another warrant they have to do as a favor to somebody as a trade, that kind of a thing.
That’s sort of how we go, right? We kind of reveal the story and figure things out as we’re serving these warrants. And sometimes these warrants are not by choice, either. We’re sort of forced into them.

TVLINE | Talk about the new Big Bad we’re about to meet.
In Episode 2 we’re getting a brand new bad [guy] by the name of Jelco (played by Bitten‘s Pascal Langdale). He’s much more complex and much more interesting than maybe at first meets the eye, and he becomes a big part of what’s going on in Old Town — and what’s happening in the Quad, as well — for the second season.

TVLINE | All told, what episode or sequence are you most excited for fans to see this season?
Well, there’s a ton of amazing stuff throughout, but a ways down the line, in the finale, there’s a big spaceship sequence that John is involved with that, just as a fan of the show myself, I’m very interested to see how it all comes together.

Want more scoop on Killjoys, or for any other show? Email insideline@tvline.com and your question may be answered via Matt’s Inside Line.