This Wednesday on Fox’s Wayward Pines, Dr. Yedlin’s best intentions were for naught, leading to a major casualty.

Theo spent much of the episode attempting to bridge the communication gap between humans and abbies — or at least “Margaret” — but using flash cards with simple symbols to teach the first female captive concepts such as “friend” and “leader.” Theo also hoped that his efforts would confirm that Margaret exerts some “control” over the others of her kind.

Alas, when Theo went to test out his hypothesis, by getting into a cage with one of the vicious, snarling male abbies, he nearly got his arm ripped off — until Margaret intervened by screeching, proving his theory. 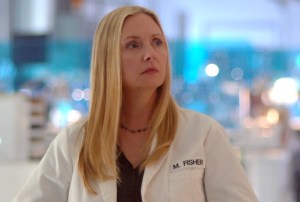 extraordinaire Jason could care less, however, and made the controversial decision to “end” all of the experimentation by putting a bullet into each of the captive abbies’ heads. And though he was stopped short of offing Margaret, the damage was already done. Having witnessed the human’s cold-blooded murder of her kinfolk — and having earlier spied Theo punching in the key code to her cell — Margaret sneaked out and oh-so-surreptitiously sliced late-working Megan, who proceeded to bleed to death as the beast stood over her. Margaret then made tracks for the outdoors she knows all too well, surely to rally her troops and create all kinds of headaches for the folks of Wayward Pines.

Elsewhere in the episode, a compelling series of flashbacks showed us exactly how CJ popped in and out of statis over the centuries, “checking in” on Earth every 20 years. As he did so, he laid witness to the tragic, gradual devolution of society and the world, lost to virus, poison and war. (To pass time during awakenings, he would talks with his love Eileen or people such as Juliette Lewis’ Beverly, whom he only knew through their file folders.) He at one point ventured outside where he bumped into Griffin, who had juuuuust a whiff of abbie-ness forming inside him. Griffin begged CJ to take him with him, but CJ decided to spare the stranger his ghastly fate, snapping his neck.

When the year 4014 eventually came around, CJ released Pilcher and some others. Stepping outside, Pilcher was surprised (though not entirely) to see full-on abbies lurking all over. But rather than wait things out even more, he told CJ they would forge ahead, build their town inside a fence and proceed with Group A — whom CJ eventually saw go mad and destroy themselves, unable to grasp their new reality and all that had been lost.

What did you think of Season 1 vet Hope Davis’ brutal sendoff, and the CJ reveals?