If you’ve been waiting for Tyrant‘s Jennifer Finnigan to have her chance to shine in the Abbudinian sun, Season 3 of the FX drama is for you.

Having watched rather helpless from the sidelines of the United States for much of Season 1, and led to believe husband Barry was dead for a good chunk of Season 2, Molly Al-Fayeed has been a rather reactive character. But starting this Wednesday at 10/9c, and especially as the second and third episodes unfold, Finnigan will be thrown into the series’ “scariest” storyline ever, all while Barry does his best to lead an already volatile Abbudin in the wake of his brother Jamal being an assassination target.

Calling from the show’s home base in Budapest, Finnigan shared with TVLine a tantalizing look at what’s ahead.

TVLINE | To anybody who hasn’t watched the first two seasons, who hasn’t gotten around to bingeing it: Do you think it’s possible to just “jump in” on Wednesday night?
I wouldn’t recommend it, but I am really strict about my TV watching. In fact, my husband gets so annoyed with me because I have to watch everything sequentially. [Laughs] I suppose if you wanted to try, you could, as long as you know the basic workings of the show. But I would suggest they find time to at least watch a few episodes of Season 2, which I think was a lot stronger than Season 1.

TVLINE | I remember watching the Season 2 finale and thinking it was very series finale-like. Jamal looked very dead there.
I know. That was what everyone, from my sushi chef to my dentist, kept asking me throughout the winter and spring — “Oh my God, is he alive?” We [on the cast] actually didn’t know [his fate] until we started shooting Episode 1.

TVLINE | I mean, I guess there is a series about “What does Barry do if Jamal dies?,” but it would seem weird to lose one of the leads.
But that’s kind of the state of TV right now, the Game of Thrones way of thinking, which is “everyone is disposable” in a sense. It’s not out of the realm of possibility that there is no Jamal, but he’s definitely a very central character. And he’s also very charismatic, and a fan favorite. But I do think the show can exist without Jamal. The initial concept was really centered on the family. It was really only by Episode 2 and 3 that it morphed into more about the brothers.

TVLINE | In Season 1, Molly returned home to the States, while in Season 2, Barry was presumed dead for a while and they were separated. This has to be the season that you and Adam Rayner get your most scenes together ever.
We have been working a lot together, and we love that. At the end of Season 2 we were like, “Good God, 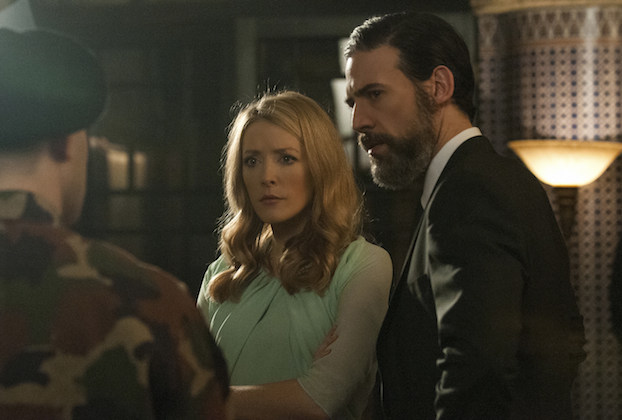 we haven’t worked together once!” So it was kind of nice to get back together and work with him again. I always joke that in Season 1, my drinking game was every time Molly said, “Barry, are you OK?” In Season 2, we saw Molly find herself a bit, but Season 3 really kicks in. I’ve been patient — I felt like it’s about time they give me some meat — and it’s been everything I hoped for and more.

TVLINE | How does Molly take to the “first lady” role?
Pretty well. I mean, she’s really smart. She’s opinionated. I get to do those scenes in the war room, which is so fun for me, just hanging with the boys and wearing a power suit. It’s funny, I’ve always played doctors and lawyers, I’ve always played strong women. It just took a while to get that going on this show because the other female character, Leila (played by Moran Atias), was so powerful right out of the gate and Molly was more of a support to her husband. That was frustrating for me as a performer. I like the stronger roles.

TVLINE | But this build-up, in retrospect, has been organic. To have Molly quickly go from being doctor/housewife to someone wielding power in a Middle Eastern country would have been a stretch.
You’re so right. TV is your specialty, so you know that and you understand that dynamic. But as an actor your instinct is to want it all right away. I remember having so many discussions about it with Howard [Gordon], for whom I have nothing but respect and adoration, but it was hard. I was like, “Howard, this isn’t the character that I’m interested in playing.” He said, We just have to earn it with Molly.” We have to get to know her, and now Season 3 is that storyline. Wait until you see it. I think it’s the bravest, scariest thing we’ve tackled. And it’s especially timely right now with everything happening in the news. It’s devastating and terrifying.

TVLINE | Do you think that some people were hesitant to try Tyrant because of that, because there’s so much of this in the headlines? Maybe they’re afraid the show would ask them to sympathize with a Middle Eastern despot?
I don’t know if that was what made people reticent…. I think we were trying to find ourselves, as a lot of shows do in Season 1. There were so many different ways to tell the stories that we wanted to tell, and sometimes our story got lost in a muddle. But I really think the show has now found its voice. It’s really hit a peak right now. It was a slow burn, and maybe not so strangely it does very well internationally. I think we have many, many Middle Eastern fans, because that’s mostly who approaches me. They’re so interested to see a story told from their point of view and their perspective.

TVLINE | So you get good feedback from them?
We really do. I think Howard and Chris Kaiser, they take great care in trying to, first of all, not offend, and definitely tell the story from every perspective. Howard has always placed great importance on properly developing the Middle Eastern characters and not making them caricatures and stereotypes.

TVLINE | Barry’s rise to the “throne” surely won’t go unchecked, I imagine.
It’s really nice to see Adam be able to take a bite out of these scenes that he’s been given. I think for a long time he was sort of “the straight man,” because when Jamal walks into a room he sort of sucks the air out. He’s so charismatic and larger than life, and that didn’t leave as much room for Barry to exercise those “tyrannical muscles,” so to speak. Now that Barry is stepping forward a bit more, 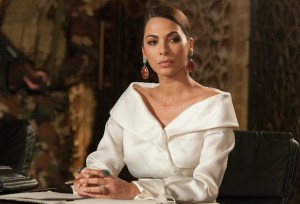 it makes for a way more interesting character. I love watching what Adam’s doing. There’s just something different and edgier.

TVLINE | I can’t imagine Leila goes quietly into the night. We’re not going to get a Pretty Woman montage where she teaches Molly how to be first lady, which fork to use for the escargot, are we?
Sadly — because Moran and I like working together — we barely had any scenes together this season. I hope that doesn’t spoil anything, but she really does have her own storyline going on, as do I. We’re both dealing with very, very different crises.

TVLINE | Meanwhile, what are the kids up to?
[Laughs] I can’t give away too much there. “Both of the kids are back,” in Abbudin, let’s put it that way. The writers and I call the first episode “the last happy moment,” so if fans are expecting us to go storming right out of the gate, they may be surprised, because the first episode is building blocks for the rest of the season. It’s one small moment of happiness and peace for the Al-Fayeeds, for Abbudin. And then of course the s–t hits the fan.

TVLINE | Should we worry at all about Daliyah? She was getting kind of close to Barry there. 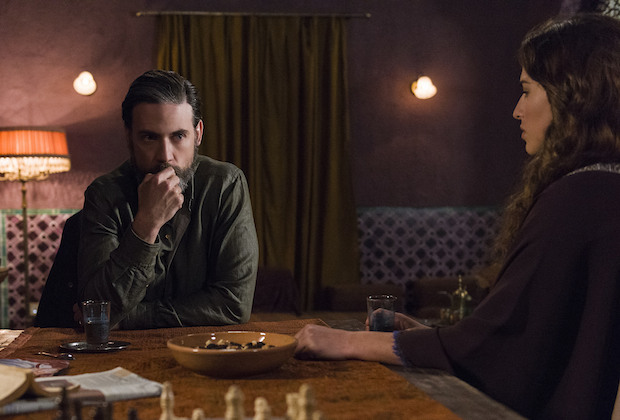 We should definitely worry about Daliyah. If you go through a battle, a war with someone, those feelings don’t just go away. And let’s be honest, Barry and Molly haven’t had an extremely strong relationship in a while. But I will say there’s such a double standard in TV. Not to get on a soapbox, but… Barry has been lying to Molly “for her own good” and for the safety of the children, but he didn’t let her know he was alive for months. This woman mourned him. Her children mourned him. She was going through her own personal hell thinking that he was dead, and in the meantime … he was kind of falling in love with someone else. None of the fans got on him about that.

TVLINE | That always rubbed me a bit the wrong way, yeah.
Then of course there’s Jake Weber, who played the lawyer who was sniffing around Molly when she was in a really vulnerable state. They kissed, and that was it, before she told him she wasn’t ready. And then of course the minute Barry finally came out of hiding and admitted to her that he was still alive, she immediately ejected the lawyer from the picture. And yet I still have people getting on me about how Molly kissed some guy! I don’t know if Howard would want me to say this, but when we were filming at the beginning of Season 2, he was like, “I need to figure out if and when Molly and the lawyer sleep with each other.” I went, “Absolutely not.” I explained that if Barry did that with Daliyah, somehow he could come back from it, but fans are less forgiving of female characters, especially the wives of the lead character. “If you do that, she won’t be able to come back from that, and I’m too protective of this character to allow that to happen.” Bless him, he agreed in the end.

TVLINE | Before we go, give me one last tease about Season 3….
I’m not exaggerating when I say Episodes 2 and 3 launch one of the most powerful storylines — and I’m a huge watcher of TV — that has ever been done on television. I don’t want to give too much away, but I will say as an actor I’ve never fallen so deep into just devastation. It is the deepest, scariest, most painful and terrifying occurrence you could imagine. And it changes them forever, all of them. And with everything going on in the world, it’s a fairly accurate reflection of things that we’re seeing every day. I hope people watch it, but I hope it doesn’t seem like we’re sensationalizing anything. Because that certainly is not the intention.

Want more scoop on Tyrant, or for any other show? Email insideline@tvline.com and your question may be answered via Matt’s Inside Line.