If Tuesday’s two-hour premiere was any indication, CBS’ Zoo is going all in with Season 2.

Whereas Season 1 of the James Patterson adaptation took things a bit seriously as it explored the mystery of a manmade genetic mutation within the entire animal kingdom that turned our fine feathered and furry friends against us, Season 2 — or at least the effects-laden premiere, which for all I know blew the entire budget — is going full-tilt bananas (no pun intended, monkeys). We’ve got multi-animal assaults, a luxury jet that would make S.H.I.E.L.D.’s Zephyr jealous, new characters and a “Phase Two” twist that has upped the stakes, putting one hero in particular in a frightful situation.

Picking up immediately where the freshman finale left off, Zoo unleashed that rainbow collation of a stampede upon Abraham, Chloe and Jackson’s SUV, which did its best to speed away. Ultimately, the trio would lay down, Die Hard 2-style, a “wall” of fire fueled by a leak in the vehicle. Jackson then drove the SUV away and purposely crashed it into a flatbed. Left wounded on the ground after, Jackson was approached by a tiger… who sniffed at his animal bite and then quietly moseyed on along.

Now, one might assume that Jackson would immediately report this development to the team — that being bitten by a mutated beast makes one “immune” to their attacks. And yet he doesn’t, later confiding only in Chloe, who in turns doesn’t see this as a possible breakthrough/alternative to a cure for the animals themselves, and agrees to keep the secret. Oy!

Mitch and the others set out 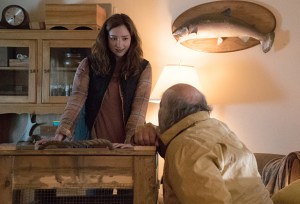 to find Jamie in New Brunswick, only to arrive just after she sneaked away from the beast-surrounded cabin and its freshly mauled owner. After retrieving from the cellar the amusingly CGI’d leopard from which they hope to (but ultimately won’t) extract cure-creating DNA, Abraham makes the difficult call for them to abort the search for Jamie and helicopter away from an approaching herd of beasts. This decision sparks some animosity between Abraham and Mitch for the balance of the premiere, though they set aside their differences enough to reconvene on a bi-level jumbo luxury jet donated by an “interested third party.” Their first stop is Patagonia, where another pathologist, Dr. Vickers, had ventured with a team of soldiers to track a “creature” possessing Phase Two of the mutation. Wicker and all but one of his team are brutally killed by the “creature,” who is actually a Hungarian scientist turned into, for lack of a better term, a Wayward Pines Abbie.

With the sole survivor of Vickers’ team, Dariela Marzan (played by Army Wives‘ Alyssa Diaz), Mitch & Co. capture the Abbie and bring him aboard the jet for examination, all while Jackson privately frets that grotesque, bubbly, pizza cheese-like skin is in his own future. When the Abbie at one point gets free, a rage-filled Dariela — as vengeance for her fallen comrades — puts the freak show down with a bullet to the head, despite Chloe’s pleas to spare the test subject. (I pretty much stick to Patterson’s Alex Cross novels — is the Abbie part of his Zoo?)

Jackson and a local track down the elephant that bit and created the Abbie. After Jackson (brave man!) rams a needle into the beast’s butt to extract a Phase Two blood sample, they run to catch up to the others in the SUV and make a beeline for the jet, with hard-charging Dumbo nipping at their heels. Chloe orders the back gate dropped open and the jet ready for takeoff, as Abraham puts the pedal to the metal and drives the SUV up the ramp and into the ascending jet. (Prediction: The pilot, conspicuously cast with The Killing’s Tom Butler, is actually the jet’s wealthy donor.)

Back in Canada, meanwhile, Jamie lies low well enough to elude the world’s fiercest bison, and suffers any number of indignities (that big toe, blech!!!) before eventually bumping into a fellow human, Logan (The Carrie Diaries‘ Josh Salatin). Having left a message about her destination on the roof of the New Brunswick cabin, Jamie tells Logan that they are going to Caraquet, which might offer some semblance of safe harbor.

What did you think of Zoo‘s action- and CGI-packed return?