With this Sunday’s simultaneous launch of $100,000 Pyramid and Match Game, ABC has upped its retro game show reboot roster to a full four shows, if one lumps in (Celebrity) Family Feud with the recently premiered To Tell the Truth.

Celebrity Family Feud is now in its second season (and the “civilian” flavor has been in and out of syndicated TV), so there’s nothing much to discuss on that front — save for Kelli Pickler seemingly thinking the final round poses essay questions. To Tell the Truth meanwhile revived an oldie but goodie, in which a panel of celebrities try to deduce who of three strangers is, say, the actual inventor of pajama-like suits, and who are posers. I found ABC’s revisiting of TTtT a little faster-paced than I recall from my rugrat days, but it’s a decent enough redo.

Returning to the timely topic at hand, though, Pyramid (no matter the top-dollar denomination) and Match Game (is this properly Match Game ’16?) are near and dear to my heart, so here’s a side-by-side comparison. 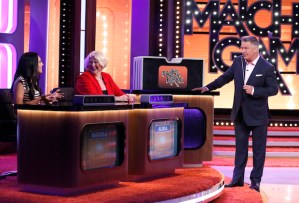 both of ABC’s new Sunday entries quite faithfully mimicked their predecessors, save for understandable upgrades from chyron’d clues and manual scoreboards. And unless I’ve been duped by digital wizardry, Pyramid appears to even be using clue categories that physically swivel (versus Family Feud’s long-ago elimination of the tactile flip-ding!). Match Game gets the edge here, though, bringing back the shag carpeting, Gene Rayburn’s wand-like hand-held mic and, the touch I most appreciated, A/B card holders that slide down into a pocket. ETA: I did mean to gripe about Match Game dropping the Ο and Δ icons, effectively taunting the semi-color blind such as myself.

GAMEPLAY | Like Feud, Match Game‘s fill-in-the-blank puzzles lent themselves to bawdy answers even more so than its previous, groovy incarnations, while Pyramid stayed quite wholesome. That said, I appreciated the topical nature of some Match Game puzzles (Hollywood Game Night, which keeps episodes on the shelf for months, should take note), or how they made reference to a panelist/host (“If a group of geese is called a gaggle, a group of Baldwin brothers is a ______”). Match Game could better balance the easiness of questions; the aforementioned, utterly freeform Baldwins Q was immensely more difficult to match an answer to than the one that followed it.

Update: The most notable rule change on either show came to the fore during Pyramid‘s second half-hour, where the tiebreaker is now won by the team that got to their score in the shortest time (versus additional rounds/categories); I was not a fan.

CELEBS | On Pyramid, you 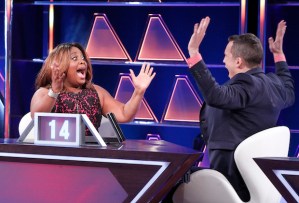 can easily identify who is a true student of the game (e.g. Sherri Shepherd and Kathy Najimy, who with zero effort each took their partners to the winner’s circle twice) vs. a well-placed bit of network synergy (an almost painful Anthony Anderson). Of Match Game’s debut panel, Titusss Burgess, Sutton Foster and Debra Messing seemed at home, while Rosie O’Donnell was quite seamless as a snarky Charles Nelson Reilly/Brett Somers hybrid. (That said, I hope Rosie’s gifting of a vacation cruise to a losing player hasn’t set a precedent for Celebrity Apprentice-like grandiosity.) The trick for Match Game moving forward it won’t enjoy the “recurring” nature of panelists, so fond or frenemy “relationships” between them won’t form. (On the flip-side, you thankfully avoid that rut where the player picks Richard Dawson for the bonus round every. single. time.)

CONTESTANTS | Versus daytime-TV game shows which have the luxury of churning through a large volume of player types, primetime editions tend to pick straight out of “Central Casting,” going “big” sometimes to a fault. (Match Game‘s first winner kept “pulling focus” from the proceedings with hearty guffaws and an ebullience during the final round that seemed more at home on The Price Is Right or Let‘s Make a Deal.) One other observation I will offer: It would seem that with celeb Twitters and Instagrams and such, the divide between “them” and “us” has greatly vanished versus, say, the 1970s. That struck me when a Pyramid player brazenly disputed Anthony Anderson’s desire to give the final round of clues. Best I recall, there was a more venerable regard for celebrities “back in the day.” 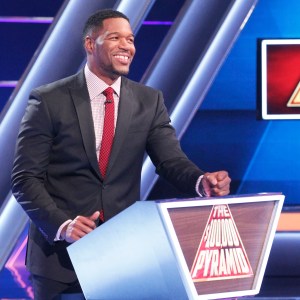 Gene Rayburn and their peers were stars in their own right at the time, make no mistake, but Michael Strahan and Alec Baldwin are coming from a different place, one where they are more likely to have mingled at an event with a celeb player, or had them as a guest on their talk show. On Pyramid, that served Strahan well, as evidenced by his playful camaraderie with Anderson (especially as they each joked about getting mistaken for each other). Baldwin meanwhile surprised me with how easily he slipped into the host role, not giving any whiff that it was a “step down” for a two-time Emmy-winning actor.

What did you think of ABC’s latest game-show reboots, and how they compare to previous incarnations?