Almost Famous auteur Cameron Crowe this Sunday invited you to go on tour with the Roadies for the Staton-House Band. Will you stick around for upcoming dates?

In quick (and shamelessly Showtime-y) fashion, Roadies first introduces us to tour manager Bill (played by Luke Wilson) as he unwittingly beds a bigwig promoter’s (very) young daughter — which is par for the course for the divorcé, production manager Shelli (Carla Gugino) later points out. The premiere revolves around the Staton-House Band’s tour stop in New Orleans, where we next meet Kelly Ann (Imogen Poots), an electrician on the cusp of leaving the “family” to pursue film school dreams, and Phil (Ron White), a road manager with many a yarn to spin (and a few secrets to hide). 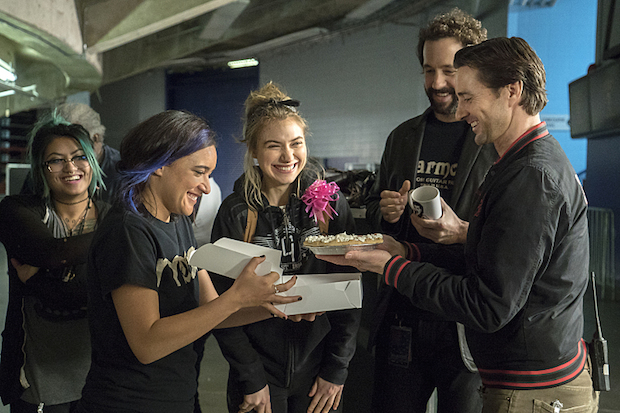 who winds up taking over for her as nanny to the lead singer’s “devil child” of a son.

In addition to Kelly Ann’s imminent departure — which we of course knew would get waylaid, and which we knew would somehow evoke the “running” theme of her so-so short film — the primary drama comes from the arrival of Reg Whitehead (Rafe Spall), a Brit bean counter who’s there to trim the fat, starting with felonious Phil. His icy-cold handling of the cuts (and glaring lack of familiarity with good music) rouses a speech out of Kelly Ann, nudging her toward a reversal of decision that is later cemented by a personal sentiment from Staton-House guitarist Christopher House (Tanc Sade). There’s also running subplots about an uberstalker who gets her hands (and other parts) on a mic gifted to the lead singer by the Boss, and a band member’s aversion to firecrackers (which, much like Chekhov’s Gun, manage to go off just as Staton-House takes the stage).

On the romantic front, in addition to Milo’s quiet crush on Kelly Ann, there is the foundation for a simmering something between Bill and Shelli, whose marriage has been compromised by her time on the road coupled with her fellow roadie husband’s lack of effort to meet up with her.

Was there almost enough Almost Famous vibe to keep you tuning in?