From the moment that Donnie interrupted Megan and Mark’s date night in this week’s Outcast, he was asking for a beating. And by the time we found out why his return to Rome so rattled the cop’s wife, we were hoping he’d get it, too. But did he? Read on and find out!

THE DEVIL, YOU SAY | As “A Wrath Unseen” began, Sidney crashed Norville’s funeral, introduced himself as an old friend of the deceased, and “casually” remarked that he hoped to see Kyle around. Just because Norville had spoken fondly of Kyle, mind you, not because the sinister figure had any demonic intentions or anything. (Mm-hmm.) Later, Patricia was admiring keepsakes of Reverend Anderson’s good works when the sight of a ceramic figurine caused the preacher to have a terrifying flashback to a possessed Mildred. (Thank God the show had something juicy in store for Grace Zabriskie!) That evening, after Giles’ dog freaked out in Ogden’s presence, the chief returned to his pal the watch from the abandoned camper — it was Ogden’s! Suspicious, the chief then staked out the camper, and lo and behold, Ogden showed up to torch it. Off that, Giles told Mark that they’d be sending the evidence he retrieved for testing.

GET THE HELL OUT | Already having made his presence known to Megan — and having introduced himself to Mark as someone with whom she went way back — Donnie next ran into Kyle at a bar. Our hero’s response? Attack, attack and attack some more. Which was futile — he was no match for Donnie. But you had to admire Kyle’s determination, especially when a flashback revealed that, while Donnie was staying as a foster child with Megan’s family, he’d abused her. (At the time, Kyle had gone so far as to take beatings from Donnie so as to keep him away from Megan.) Later, the redhead retrieved a hidden gun and told her onetime attacker to get out of Rome before Mark messed up their life together by taking care of the creep himself. Cue Mark taking care of the creep himself — and being caught doing so by his police cruiser’s dash cam — in 3, 2… 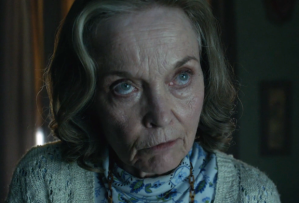 SHE-DEVIL | While Reverend Anderson and his sidekick were paying a visit to Mildred’s house — and the preacher was getting an earful from her daughter Sophie about what “a cranky old bitch” she’d become — Kyle was being taunted by the snidely senior about his penchant for punching. In spite of her nastiness, he tried to help her to her seat, and — say now! — his touch burned her. Nonetheless, Anderson was convinced that his exorcism of Mildred two years prior had worked. “I hope I’d know if I was preaching to a demon!” he barked. Of course, he wasn’t 100 percent certain she was demon-free. (More like 92 percent.) And when he checked back in on Mildred later, her devilish demeanor made him believe that a re-exorcism was definitely in order. Unfortunately, by the time he returned with Kyle, she’d told Sophie how he’d “mistreated” her two years ago, so the woman wouldn’t let them anywhere near her mother. Off that, Kyle wondered whether Mildred wasn’t the only person Anderson had exorcised unsuccessfully. What if — gasp! — Allison was still possessed, too?!? That possibility scared Anderson so much that, restraining order be damned, he turned the car around and headed for Kyle’s wife’s place.

So, who did you think was scarier — Grace Zabriskie, as Mildred toyed with Anderson, or Scott Porter, as Donnie baited Megan and Mark? Hit the comments.