TVLine has learned that Gotham has tapped All My Children alum Maggie Geha to take over the role of the would-be eco-terrorist, replacing previous portrayer Clare Foley (see photo, below). And now we can reveal exactly how the Fox drama will explain the character’s sudden growth spurt.

Following an encounter with a monster from Indian Hill, Ivy Pepper finds herself reborn, and one step closer to the DC villain she is destined to become: Poison Ivy. Now a 19-year-old woman who’s harnessed the full 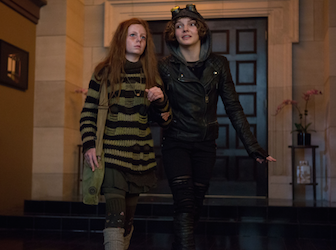 power of her charms, she sets her sights on Bruce Wayne (David Mazouz).

This marks the second significant piece of Gotham casting news ahead of Season 3, following our earlier scoop that Once Upon a Time warrior Jamie Chung has been hired to play the recurring role of Valerie Vale, Vicki’s Aunt. And there’s more new blood to come.

In addition to the imminent introduction of the Mad Hatter, the Season 2 finale also teased the entrance of Bruce Wayne’s long-haired doppelgänger, a development exec producer John Stephens previously hinted to TVLine is “in line with all the other story we’ve been telling [in Season 2], but one piece that we’ve kept hidden.”