The Hawthornes’ annual holiday newsletter’s gonna be a doozy this year.

Will the family at the center of CBS’ ominous serial-killer drama American Gothic lead with eldest daughter Alison’s mayoral run (or the fact that she appears to have an illicit lesbian attraction to her campaign manager)? Then again, they could go with prodigal son Garrett’s return to town (along with a how-to guide to shaving your mountain-man facial hair with a hunting knife).

Oh, wait, I know! How about that time when mom attached dad’s heart monitor to her own finger, then quietly cut off his oxygen supply and ushered him into the great beyond! It’s not as if she could’ve really let him live and spill the beans about possibly being the long-dormant Silver Bells Killer, right? 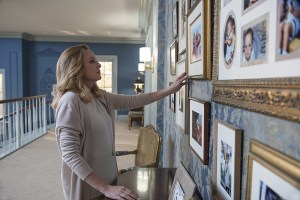 But don’t hand the Creepiest Family Member statuette to Maddie (Oscar nominee Virginia Madsen) just yet! Tween grandson Jack made a good case for himself by abducting the neighbor’s cat Caramel and… well, more on that in just a second. Let’s recap the series premiere (aka “Arrangement in Grey and Black”) and predict just how many of these folks will be locked up before the season is over.

INSIDE THE BELT WAY | Things get off to an almost supernatural start as the Hawthorne’s youngest daughter Tess (Jane the Virgin vet Megan Ketch) and her detective hubby Brady (Once Upon a Time‘s Elliot Knight) drive through a tunnel in Boston — and just miss a portion of the ceiling collapsing behind them as they exit. The crumbled debris contains a belt with a fingerprint that traces back to a victim of the Silver Bells Killer, a notorious serial murderer who targeted rich and powerful businesspeople from 1999-2002, then “retired” without ever being caught. While Alison (The Knick‘s Juliet Rylance, sounding awfully British), flanked by her entire family, gives a stump speech about the discovery of the possible murder weapon (and how she’ll work to get the case solved), her powerful contractor father Mitch gets a case of the uncomfortable woozies, then collapses. Damn, dad, didn’t you get the memo about staying on message! 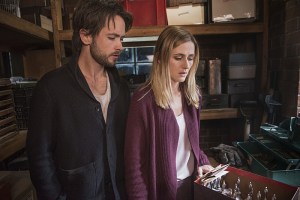 MEANWHILE, BACK AT THE HAWTHORNE ESTATE… | Tess catches her heinously coiffed brother Cam (Shameless‘ Justin Chatwin) rooting around in a greenhouse/storage shed, and quickly realizes the recovering addict is seeking some hidden stash. Turns out he’s left his fellow addict wife Sophie and gotten custody of their son Jack, but he’s still teetering, and their father’s hospitalization is proving more than he can handle. Tess agrees to help him locate — and dispose of — the drugs, but what she finds on the top of a dusty shelf sends both of their heads spinning: It’s a red box filled with little silver bells (the killer’s calling card) and newspaper clippings about the unsolved mystery. When they tell Alison, she declares it “a November 6 problem.” Little does she know, the family matriarch wants it handled sooner. 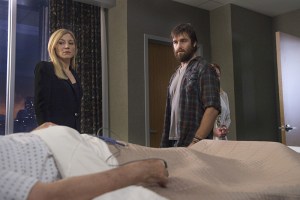 THE SILENCED TREATMENT | Mitch’s recovery goes awry when long-estranged eldest son Garrett (Banshee‘s Antony Starr) returns home and whispers something into his ear. Garrett claims it was nothing more than a sentiment about being happy to see the old man, but Alison’s spooky little twins, Harper and Violet, catch a different message from their perch on the floor. “I’m gonna tell them it was you.” The episode closes with Maddie knitting beside Mitch’s hospital bed, and apparently, he wants to beat Garrett to whatever punch Beardy McBlankeyes is planning. “We have to tell the truth,” he pleads to Maddie. But her gentle “shhh” turns to something more menacing as she instructs her husband, “Just close your eyes and relax. I love you” and then holds his gaze as she cuts off his oxygen supply. 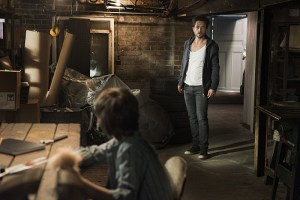 THE CURIOUS INCIDENT OF THE CAT IN THE NIGHTTIME | OK, so it seems deeply weird that the episode is interspersed with the Hawthorne’s neighbor ringing the doorbell and seeking information on the missing Caramel’s whereabouts. But it all makes hideous sense when Cam finds out Jack (who has a penchant for drawing corpses with ligature marks in his free time) has been hanging with the kitty, performing an experiment to learn that “garden shears can cut through bone!” Caramel only loses a tail in the incident — and Cam quickly rushes her to the vet to reattach it — but Jack’s sketchbook reveals a feline diagram sectioned off like something you’d find at your local butcher’s shop.

But enough about Caramel — may the show’s writers keep her safe! What did you think of the American Gothic premiere? Grade it in our poll below, then share your thoughts in the comments!