The following contains major spoilers from the Person of Interest series finale. If you read on before watching the episode, Samaritan will replace all your bookmarks with Kardashian Instagram pages.

As CBS’ Person of Interest came to an end on Tuesday night, Team Machine suffered one final loss, while another key player came back from the dead to fight another day. Someday…?

After saving Reese and Fusco (played by Jim Caveizel and Kevin Chapman) from a dockside execution at the hands of some dirty cops, Finch (Michael Emerson) set out to destroy the surviving copy of Samaritan, which was stored in an air gap inside a gold vault. Shaw (Sarah Shahi) meanwhile adjusted to having in her ear The Machine’s new voice, which delivered a final message from Root (Amy Acker) — that if Sameen were a “shape,” she was an “arrow.”

When Samaritan’s copy “escaped” the gold vault to make a beeline for a satellite dish that would transmit its code up into the sky to do who god-knows-what kind of damage, Harold locked John inside the chamber, prepared to make the final sacrifice by directing a hijacked missile to said rooftop satellite dish — dooming himself in the process.

John, though, had long ago made a “previous arrangement” with The Machine. As such, Harold was directed to the wrong rooftop while his partner in crimestopping put himself in the missile’s path. Once the dust settled, John had perished while Harold survived a gunshot wound to reunite with Grace in Paris. Both Fusco, who recouped from his stabbing, and Shaw stayed put in New York — with the latter negotiating custody of Bear, after coldly taking out Root’s killer but before answering a call from a random pay phone….

TVLINE | In your mind, was there ever a different combination of characters that didn’t make it out of the series alive? Were there any constants, as in, “Yes, this person will live”? 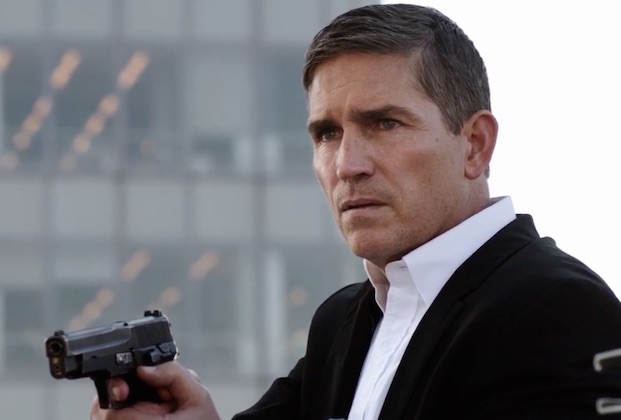 JONAH NOLAN | What do you say, Greg? Reese always had a bullet with his name on it, right?
GREG PLAGEMAN | Yeah…. We talked about every permutation, and this one felt the most poetic, in terms of what Reese was initially hired to do, and him understanding that this was what it would come down to, what he’d have to do to save Harold Finch.

TVLINE |  He came into it as a soldier, and he went out a soldier.
PLAGEMAN | Yeah. Yeah.
NOLAN | I think in the pilot there was the sense that’s where he was headed. By the time you get a 103 episodes in, you don’t want to be beholden or “locked” into something, but this felt right when we talked about it whenever we talked about it, and it felt right when we sat down to write this one.

TVLINE | Can I just say how much I enjoyed the scene between Finch and Reese, where Harold expressed how surprised he was by the friendship that was born out of their partnership?
NOLAN | Aww, thank you. Look, the show has always had a sort of… cerebral appeal. Emotions dont come very easily to me [Plageman laughs], and we felt like with the finale it was more about emotional closure than “Look at the clever s–t we’re doing!”

TVLINE | Was the Ice-9 virus always a part of your end game? Because some have remarked, “Isn’t this something Harold might have mentioned sooner?”
NOLAN | There were a few mentions of it over the years — not exactly Ice-9, but the idea of it. In fact, going back to Reese’s training officer [Kara Stanton], played by Annie Parisse, she was trying to get her hands on something just like Ice-9 several seasons ago. The idea of a “doomsday” virus is something we’ve talked about, but the problem of course is that if you deploy it, you destroy The Machine. That’s why it was a long-haul decision. It was the “nuclear” option, doing  damage to the global economy, etcetera…. things the world could recover from, but it’s a lethal event for this version of The Machine.

TVLINE | Aside from, as you previously told me, not getting to have Elias be a part of the team for as long as you would have liked, is there anything on your list that you simply couldn’t get to this season? Any moment, any sequence, any conversation, any goodbye…?
NOLAN | There are certainly characters we would have liked to revisit again in flashback. In Episode 12, there were a number of different characters who’d come and gone on the show, who we would like to see one more time. Michael Kelly (as CIA agent Mark Snow) and Annie Parisse, obviously. They’re fantastic….
PLAGEMAN | We had written some scenes for them, didn’t we? I think we did but we cut them because we just ran out of room.
NOLAN | But in terms of goodbyes, everyone who is still alive in the present day, I think we tied up all those knots. It would have been nice to get to Control (played by Camryn Manheim), it would have been nice to get Paige Turco’s Zoe back on…. And for me, look, I would have liked to have had more time with Finch 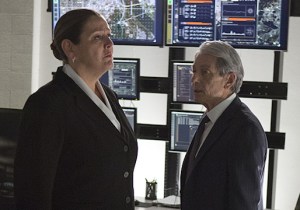 in this darker, more dangerous place. And I would have loved to have had more time with Shaw and Root, obviously. But with the vagaries of Sarah’s schedule as a mom and the reduced [episode] order… it is what it is.

TVLINE | I was going to ask about Control, if you ever considered her fate in flux or if she was decidedly taken away to be killed in the previous finale.
PLAGEMAN | I like for the audience to fill in that blank themselves.
NOLAN | That was definitely a storyline we hoped to revisit. Camryn Manheim is a spectacular actor and we had so much fun working with her. That was one of the places where we were like, “OK, we’ve got a version of closure there, and we’ve got limited real estate,” so we’ve got to concentrate on [open] storylines. There were so many things we wanted to get to, but with the limit from the network in terms of not being able to do a full-tilt serialized season…. I’m very proud and very relieved at what this incredible writing staff, led by Greg and Denise [The], was able to pull off this season. We covered a lot of territory. There are so many fun ideas in this show, and so many fun things we want to play with, and we’ll have other outlets for that.

TVLINE | Well, between introducing the D.C team of Logan, Joey and Harper, and that final tag of Shaw getting the pay phone call, was either an “escape” clause, a seed to plant in case anyone ever says, “Hey, let’s bring POI back”?
PLAGEMAN | [Laughs] Never say never. I think the premise that Jonah came up with for this show was so bullet-proof in terms of being able to come back and see if an artificial super-intelligence re-emerged… But in terms of those particular scenes, the fun of meeting the other team in D.C. was also an attempt to address one of the ongoing questions of the show. We could now imagine that perhaps The Machine has other operatives 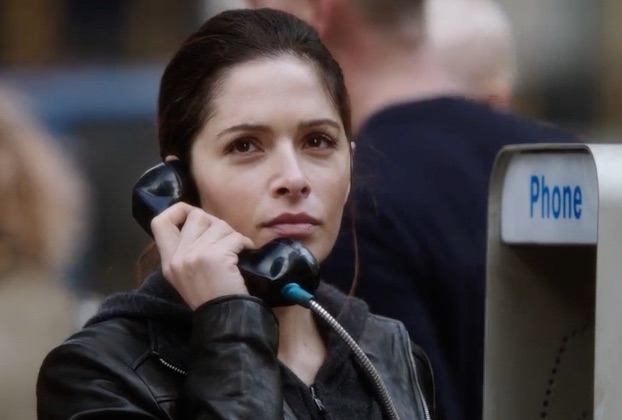 TVLINE | If there was a thought bubble above Shaw’s head when she is smiling up at the surveillance camera at the end, what would it say?
NOLAN | I think [the smile] is much about hearing Root’s voice [on the phone]. And one of the few regrets I have about the way the finale cuts together is that’s not totally clear. We had a moment between them at the end, dialogue in that moment with Sarah on the phone, and it just didn’t “fit.” At that point, “the train was running,” the main score was going, and it felt like it stepped on the moment. But the clear implication is that that relationship continues in this new form — and that the franchise continues. It felt to us not like a naked attempt to try to build a spinoff.
There could easily have been a conversation about a spinoff in Season 2, with the show riding high and Sarah Shahi’s character making such a splashy debut, but Greg and I weren’t interested in that. We were interested in doing one great show. We wanted everything to echo within the show itself, so in that moment at the end, the idea is just that The Machine keeps going, the mission keeps going. Shaw is like Reese, there’s the sense that this mission has given them meaning in their lives. And she leaves with a relationship with a dog and a god. [Laughs]
PLAGEMAN | Which are anagrams!

“Everyone dies alone. But if you mean something to someone…
if you help someone or love someone, and even a single person
remembers you… then maybe you never really die at all?”

Want more scoop on POI‘s finale, or for any other show? Email insideline@tvline.com and your question may be answered via Matt’s Inside Line. 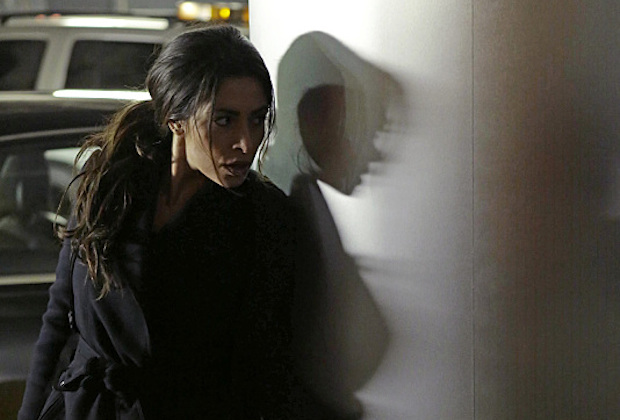