Just as CBS’ other summer launch asks “What’s Eating Washington?” (answer: alien bugs), American Gothic in a way asks, “What’s eating the Hawthornes?” (answer: the secret that a serial killer’s roots may have sprung in their own, well-manicured backyard).

Premiering Wednesday at 10/9c, American Gothic follows a prominent Boston family — lorded over by Mitchell and Madeline Hawthorne (played by Homeland‘s Jamey Sheridan and Sideways‘ Virginia Madsen) — as daughter Allison (The Knick‘s Juliet Rylance) launches a run for mayor. Simultaneous with that proud event, however, siblings Cam and Tessa (Shameless‘ Justin Chatwin and Jane the Virgin‘s Megan Ketch) stumble upon 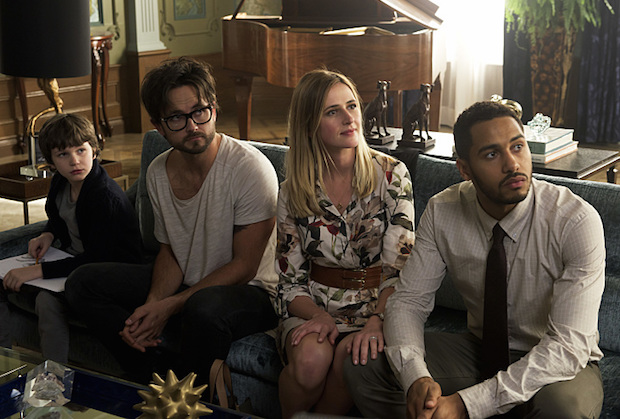 evidence that the “Silver Bells Killer” who terrorized the city 14 years earlier lived (lives?) under their mansion’s roof. The pilot alone casts aspersion on at least three family members, including a prodigal son, Garrett (Banshee‘s Antony Starr), who resurfaces after mysteriously skipping town… 14 years ago, at which time the serial slayings stopped.

As the Hawthornes enter a (hushed) debate about what to do with the discovery, questions such as, “What are the limits of family loyalty? What’s more powerful, nature or nurture?” will be raised, says showrunner Corinne Brinkerhoff (Jane the Virgin, The Good Wife). “One of the things we’ve looked at a lot, especially with the character of Allison, is the question of  the greater good. If she’s a politician who could affect real change in the world, could you argue that covering the misdeeds of someone related to her is worth it?”

As these important questions are considered — one family member flatly suggests they simply sit on the explosive evidence until after Election Day — things tend to get understandably, comedically dark.

“It’s a whodunnit, absolutely,” says Brinkerhoff, “but it also has a healthy dose of black comedy that is very important to us, tonally. That’s the fun in watching this show, seeing that one of the ways in which people cope with extreme situations is with gallows humor. That’s certainly been one of the most fun parts of writing it.”

Over the course of the season, a suspicious eye will be cast on most everyone, including Cam (a recovering addict/”tortured soul,” per Brinkerhoff), Tessa (“our moral center”) and Madeline (whose storyline 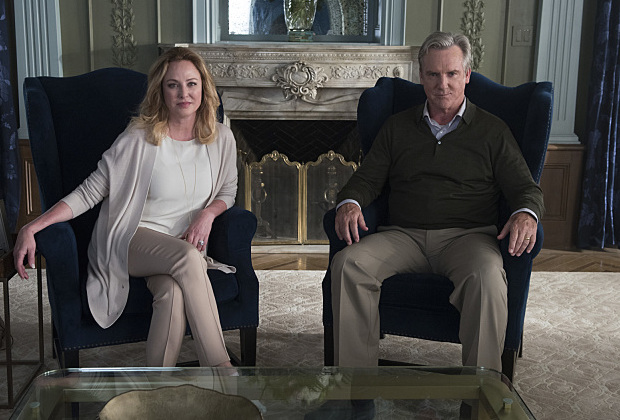 really heats up in Episode 2, given, gulp, how the pilot ends). “We might even wonder about Allison,” the even-keeled politico who will “go to great lengths to keep that her trajectory in place,” says the EP.

“The only person who can’t be a suspect, because it’s just not mathematically possible,” is Cam’s young son Jack (Stalker‘s Gabriel Bateman)— who nonetheless factors heavily into the mystery, exhibiting as he does unarguably psychopathic tendencies. (Hmm, could there be something in the bloodline…?)

In fact, Jack figures into one of the opening hour’s most unsettling scares. “We’ll continue to amp up the creepiness of the show” with moments like that, says Brinkerhoff, “while also diving into who they are on a character level, and how they react to these very extreme circumstances.”

For the fainter of heart, American Gothic‘s “hidden” pleasure will be appreciated by those who know their way around an art museum. Knowing full well that the new series shares a title with a previous CBS chiller starring Gary Cole (“I did not anticipate that there would be that much confusion, but people were very passionate about the one from 20 years ago!”), Brinkerhoff says this name was “baked in” from Day 1 — primarily because each episode’s title and theme evokes a famous American painting, starting with “Arrangement in Grey and Black,” followed by “Jack-in-the-Pulpit,” “Nighthawks” and so on.

“We also somewhere do an actual homage to the image within the frame of our show,” as the pilot does with its closing scene, Brinkerhoff shares. “That has been a fun device for us to help shape the story, and it’s a fun Easter egg that I hope people will enjoy, especially fans of art.”

Will you be tuning in for CBS’ American Gothic?