Break out the corkscrew, Mistresses fans!

Karen Kim has ceased all breastfeeding activities and is ready to sip it, dip it, and do it. And given that her 12 or so months of sobriety has led her toadult bookstores, questionable hairstyles and the kind of behavior that could easily spur a sexual harassment lawsuit from the man she pays to take care of her infant, can you imagine what’ll happen once we mix some chenin blanc with her Ph.D. in Terrible Decision-Making from The University of California at Hot Mess?

Is it any surprise, then, that recent Australian import Kate (sister of Harry, soon-to-be sister-in-law of Joss) — who just last week finished reading Karen’s self-help guide to sexual foolery — is dreaming about marriage with some rando who’s just looking for a quick-and-extra-dirty three-way? That’s one shrimp on the barbie too many, if you catch my deeply unsexy metaphor!

Meanwhile, Harry’s grappling with utterly unexpected temptation, April may be contemplating a racy duvet demonstration for a wealthy new customer and Joss’ clear and undiagnosed PTSD leads to yet another blowup outside an L.A. hotspot.

Read on for a full recap of Season 4, Episode 3 — “Under Pressure”: 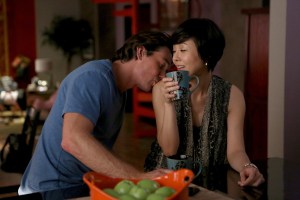 MANNY SEEKING WOMAN | “You’re such a good nanny,” coos Karen — IN THE MIDDLE OF A MAKEOUT SESH WITH ROBERT. Damn, she a freak. After about five seconds of contemplation, the duo decides to stuff good sense and rational thought down the diaper genie and perform the horizontal mambo (which is verrrry different than Robert’s “Happy Meal Commercial Booty Dance”). Soon enough, though, Robert’s sending her to soothe the crying Vivian with side-eye-inducing comments like, “Why don’t you go? You haven’t spent any quality time with her today.” Even worse, Karen tells April, “figuring out the hourly rate is a nightmare.” I’m sorry, but I have to resort to low-rent keyboard emoji to express my feelings: O_o

The whole sordid situation blows up during a tiff about Karen’s failure to reply to Robert’s texts about Vivian’s rash. “I really wish you had not stopped breastfeeding Vivian!” he huffs, adding that he’s just trying to make sure his boss/lover doesn’t miss out on important bonding opportunities due to lack of awareness. This wild overstep causes Karen to channel her inner T—p: “You’re fired!” (Side note: Did you notice how Karen keeps way too many apples on her table, considering 50 percent of the home’s full-time occupants don’t have teeth?) A subsequent night of Vivian squalling finally ends when her hapless mother slips adorable socks onto those adorable baby feet — and it’s pretty clear she wants to share the victory with the man who’s been sharing her bed. And thus, she tracks down Robert at his dog-walking gig and offers to take him back: As a boyfriend, not as an employee! See, who says you can’t teach hot crazies new tricks? 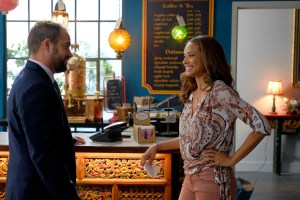 PUTTIN’ THE ROCKIN’ IN MOROCCAN? | April, still reeling from the abrupt end to her dream of being an artist, is not in any way appreciating Marc’s gift of Soft Hat, Hard Hat, a self-help tome about finding a second career path. I can’t really blame her for flinching about getting advice from the thirtysomething manchild who was living out of a van right up until he met her — and recently ditched his college plans to join a band.

Enter Michael (Ian Harvie), a grumpy customer who’s buying out half of Maison Sur Mer at the behest of his interior decorator and her quest to make his Malibu beachhouse the epitome of “Moroccan Modern.” April winds up doing a home delivery from her warehouse — and when she tells Karen about the encounter, the Nannyslayer suggests that it might be a crush. This clearly makes April skittish, but she relaxes when Michael makes some returns to the store and mentions his wife — and the fact that he’s fired his designer. April is not in any way appreciating Marc’s suggestion that she apply for the gig — “It’s not some made-up job!” she huffs, adopting Lucy’s general tone of disdain and noting her own lack of credentials. “It’s not like grabbing three guys and saying you’re starting a band!” While Marc gently weeps into his guitar — or at least tosses the Hat book into the trash — April drops by Michael’s house and offers herself to him… as his design guru! Sheesh, get your heads out of the bedding section, people! Surprise, surprise, she gets the job — and a hug from the heretofore platonically presenting Michael.

SHE LOST LOVE ON A THREE-WAY STREET | Kate, meanwhile, is going on a manhunt via the dating app Shagger — an event that brings together Karen, Joss and April for some helpful reconnaissance. Kate — who only broke up with her fiancé two weeks ago — quickly rejects the first two fellas she meets, but then finds herself mesmerized with Bachelor No. 3 (name not worth mentioning). She goes to Joss talking about marriage and asking if Joss will come and meet him on their followup date, and Joss is like, “Gurrrl, too fast.” Harry’s just glad his little sis isn’t down at the Sex Stop trying to find a partner to reenact Chapter 11 of Unleashed — don’t you wish that were a real book sold at ABC.com? — so Joss relents and joins in on the action. It’s just that Unnamed Guy thinks she wants to “join in on the action” with a side of wink-wink. EWWWWWW. Before you know it, Kate is screaming at Joss like a literal crazy person, Joss is channeling her inner Hulk (“You don’t wanna see me angry!”) and then Joss is roaring off in her car and assuming Kate’s got the Uber app on her phone. Kate tells Harry she lost her mind for a minute because she’s 35 and she wants kids and she just ditched the cheater with whom she wasted many years of her life. Joss forgives her — because, heck, they’re family now. But you’ll forgive me if Kate’s outburst prevents me from ordering her an embossed namecard to place at the Mistresses banquet table, yes? 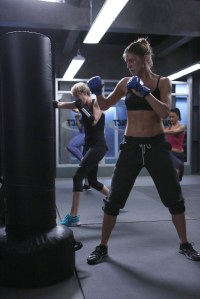 RIB FOR HER PLEASURE | Joss’ doctor informs her she has a stress fracture in one of her ribs — and reminds her it’s a fine line between self-empowerment and self-destrution when it comes to her self-defense courses. Harry’s concerned about the giant bruise he spots on Joss’ side — so she agrees to take a break from her brutal, twice-daily sessions. But all that pent up energy — and whatever issues Joss didn’t deal with as a result of her run-in with Wigged-Out Wilson — come to the surface when a cyclist pulls out in front of her car and gets knocked to the ground. A nasty shouting match ensues, and Karen notes that if Joss isn’t going to lie down on the couch and share her feelings with a professional, perhaps she needs to get back to the gym and spar. Joss’ hardcore instructor certainly seconds that emotion, telling Joss to channel her pain (physical? emotional? all of the above?) into her punches and kicks. Joss fails to tell Harry about her resumed activities, and methinks there’ll be some bruising between them when the truth inevitably comes out.

ALL IN, WITH THE FAMILY | Harry continues to try to fend off the aggressive overtures of megawealthy investor Jonathan — who prematurely draws up contracts to get the chef to ditch his beachside bistro and instead open an upscale eatery in his hotel. “This is who you really want to be,” says Jonathan, his presumptuousness showing. Marc remains as opposed to the idea as he is of shedding his Peter Pan complex, wondering why Harry can’t pursue his “own dreams on his own terms.” 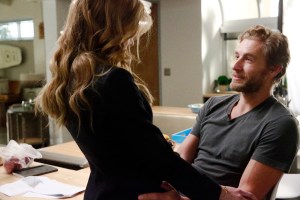 But when Jonathan invites Harry to his home — and Harry learns the man’s backstory of fleeing Iran and making it big in the U.S., where he supports and houses his entire extended family —
he changes his mind. Meanwhile, I’m wondering if maybe Jonathan could be twisted enough to have invited an entire crew of Hollywood extras to play their parts and lure Harry into some awful fate from which he won’t be easily extracted. Welcome to my overactive imagination, people!

What did you think of this week’s Mistresses? How long before Karen and Robert crash? And how are we feeling about Kate? Sound off below!