For the stars of BrainDead (airing Mondays at 10/9c), the reasons for signing onto CBS’ new summertime folly pretty much fall into two columns. But little did they suspect that they would also get pulled into perhaps the most bizarre scenes of their careers.

To recap the comedic-thriller’s premise: alien bugs are creeping into the brains of Washington, D.C. power players, steering their personalities into strange directions. Among the early victims is Republican senator Red Wheatus, played by Tony Shalhoub, 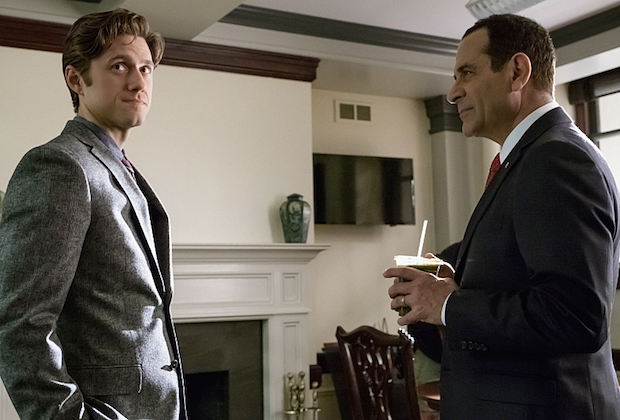 who was delighted to work for creators Robert and Michelle King after being (unsuccessfully) courted to guest on The Good Wife.

“A number of times I had phone conversations with Robert and Michelle and for certain various reasons it just didn’t happen, so I was relieved that this came along,” says the three-time Emmy winner, who infused his fictional politico with the “smugness” of Ted Cruz, a bit of Ron Paul and Donald Trump’s “fearless” usage of words. “Actors always talk and share war stories, and friends of mine who worked for them always spoke so highly of [the Kings] and the working atmosphere on [The Good Wife]. They are so smart and so open-minded and open to our input.”

That said, many of the cast who chased the Kings’ prestigious pedigree were not prepared for their far-out, science-fiction-y take on today’s political climate.

“At the time I got the pilot script, I had already been, like everyone else, steeped in this particular election cycle that seems to have started in the Jurassic Period and feels like it’s never going to end,” says Shalhoub. “I started to be obsessed with the whole circus of it all, so this was a refreshing, comedic spin on what’s going on out there. Although sometimes I’m not sure which is the fiction which is the reality!”

“I was pretty stunned by it, just in terms of what a shift it was for the Kings and for CBS,” says Mary Elizabeth Winstead, whose Laurel begrudgingly goes to work for her brother Luke (played by Danny Pino), a Democratic senator. “It was such an adventurous idea for everyone involved, it was risky in an exciting way, and it seemed like it’d be a lot of fun! I had no idea of it would entirely work, because it seemed so experimental in so many ways, a mishmash of genres.”

Graceland alum Aaron Tveit, who plays Senator Wheatus’ legislative director Gareth, concurs, saying: “As a follow-up for the Kings, I thought it was a spectacularly different thing.”

But just how “different” will things get?

While Tveit teases some “very interesting scenes with food that was placed in kind of a different circumstance than you would imagine,” Winstead — who, mind you, counts Final Destination 3, Abraham Lincoln: Vampire Hunter, Death Proof, Scott Pilgrim and this spring’s 10 Cloverfield Lane among her credits — declares, “We have done maybe the weirdest scene I have ever done, which is saying a lot. People are always asking me what’s the weirdest thing I’ve done, and now I’ve got the answer!”