The following contains spoilers from the Season 3 premiere of TNT’s The Last Ship.

The Nathan James has stumbled upon a new, dangerous mission for Season 3 — but it will have to tackle this one without the services of an original, critical team member. For as revealed in the opening minutes of The Last Ship‘s season opener, Dr. Rachel Scott did not survive the assassin’s bullet fired at her at the close of the Season 2 finale.

Played by original cast member Rhona Mitra, “Rachel was just so beloved and she did so much for the world by coming up with the cure, it was a hard decision to make,” co-showrunner Steven Kane tells TVLine. “A lot of shows kill off characters way more quickly than we do and with more blood, but we felt that the challenge for Chandler and the world with Rachel gone was that much greater, and her shadow cast across Season 3 would give her in some ways more of an immortality.” 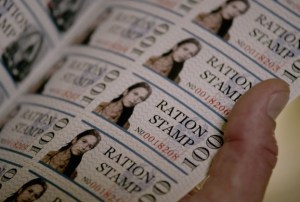 Indeed, Dr. Scott’s name is now a greatly revered one, with even “the man who saved the world,” Tom Chandler, acknowledging that Rachel did the important work while he merely “drove the ship.” Rachel’s face is even featured on the ration stamps being issued throughout the United States (to prevent hoarding), though Chandler is quick to note the gesture is “not enough” to symbolize the world of good she did.

“The first episode is called ‘The Scott Effect,’ but really the whole season could be called that,” Kane says, “because her death sort of permeates every decision Chandler makes, and also leaves him alone as the sort of ‘godfather of the new world.'”

To be sure, Rachel’s absence was felt very early on, as it became evident that because China’s President Peng was extremely selective in distributing the cure to his Asian neighbors, the Red Flu has mutated. And now there is no world-class paleomicrobiologist to turn to for answers.

“What happens is that other characters have to rise up — like Doc Rios, who was sort of Rachel’s lab assistant in the first season,” Kane previews. “He’s got Rachel’s notes, but he says, ‘Look, I’m no Dr. Scott.’ Everyone gets put in a situation where without Rachel, you’re missing a major ally — and a major weapon if you’re in the race against this virus.” 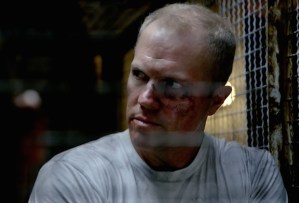 in the action-packed, two-hour premiere, the Nathan James‘ new CO, Slattery, and other high-ranking crew members were abducted from a Vietnamese nightclub following a brutal shootout. Green and Burk managed to escape and eventually made it back to the James, but Slattery and the others are now being held prisoner, in squalid conditions, aboard a ship manned by a hodgepodge of Asian thugs (who are literally bleeding their guests dry, one by one).

Previewing that half of the storyline, co-showrunner Hank Steinberg says, “We love those old war movies like Bridge on the River Kwai, old POW movies — and Adam [Baldwin] could have been in those 1940s/ 1950s movies, so that was sort of the inspiration. ‘I want to see Adam Baldwin in a POW camp and see how he’s going to work his way out of that.'” The result, says the EP, “has just been delicious.”

“We were like, ‘Yeah! Get him ferocious!’ That seemed like a fun thing to do,” Steinberg adds, “and we’ve got just the story to get him there.”

What did you think of The Last Ship‘s (delayed) Season 3 premiere, the decision to eliminate a key asset in Rachel, and the arrival of new faces (including Bridget Regan’s Sasha)?