In the dazzling third season finale of Penny Dreadful, Dracula went pale (well, paler) at the thought of a confrontation with his “singular enemy,” the hound of God. But Vanessa wasn’t concerned in the slightest. Let Ethan come for her, she said. “He and I shall write the ending in blood, as it was always going to be.” What did she mean by that? Read on and find out! 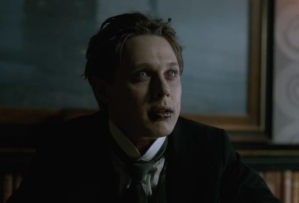 ‘THE VERY AIR WILL BE PESTILENCE TO MANKIND’ | As we began “Perpetual Night,” the first episode of the two-parter, Dr. Seward caught Renfield listening to recordings of her sessions with Vanessa for his master and asked where Dracula was keeping her. Alas, that information was, as Renfield put it, “not for [her] ears — unless [he] may keep them.” After he took a bite of a frog — one of the many night creatures sent up through the drainpipes by Vanessa and Dracula’s unholy union — Seward’s secretary quipped, “I think we can consider this my resignation, Doctor,” and attacked her. (Big mistake on his part: You don’t f— with Patti LuPone.)

Meanwhile, fresh off the boat from the States, Ethan, Sir Malcolm and Kaetenay made their way through London, its streets empty save for the wild dogs and rats, to find a group of Dracula’s familiars lying in wait for them at the Murray mansion. Once the men’s butts had been saved by the timely arrival of Catriona — as elegant a badass as ever there was — Ethan went to fetch Victor to tend to Sir Malcolm’s superficial vampire bite, and Seward showed up partaking in the day’s most popular pastime: looking for Vanessa. 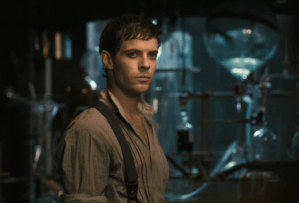 ‘I SHALL BE UNMADE’ | In bedlam, rather than stick around to watch Victor domesticate Lily, Dorian bid her farewell and headed home to do some “housekeeping” — which amounted to throwing out his lover’s army of fallen women. Unwilling to believe that Lily had been tamed, Justine stabbed Dorian, who was as unimpressed as you’d expect. “You have glimpsed liberty, and that is more than most will ever know,” he told her. Now “go back to your short little life.” Since she couldn’t bear to do so, he granted her wish and snapped her neck.

Back in bedlam, Lily tried every trick in the book to convince Victor not to administer his “cure” — from vowing that she “would rather die than live as [his] demure little wife” to reminding him that she’d only been created as an “offering” to the Creature. Ironically, the tactic that worked wasn’t a tactic at all: She simply shared the tragic story of her baby daughter, who’d frozen to death while she’d been out whoring. “Please don’t take her from me,” she begged. And, moved, he didn’t. “It is too easy being monsters,” he concluded, setting free his creation. “Let us try to be human.” 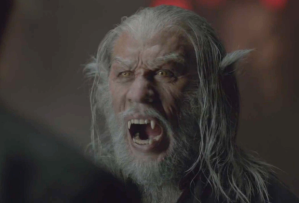 ‘YOU POISONED MY HEART!’ | Arriving at Victor’s, Ethan encountered the boy familiar, who eagerly escorted him to the doctor into an ambush. While Dracula’s minions surrounded the werewolf, their master appeared and (dropping some verbatim Stoker) remarked, “The creatures of the night… what music they make.” He couldn’t blame his rival for being enamored of Vanessa, but that love, the vampire said, was Ethan’s tragedy, not hers. When the werewolf insisted that his destiny was joined with Vanessa’s, Dracula allowed his familiars to attack — to no avail. Not only did the full moon transform Ethan into a furry killing machine, it also turned Kaetenay into a wolfman!

Naturally, once the sun rose in the second hour, “The Blessed Dark,” the first thing Ethan wanted to know from his Apache father was, WTH?!? Turned out, Kaetenay had thought that he was cursed until a vision revealed to him that his purpose in life was to give Ethan the power to save the world. So “I claimed you for God,” the Apache said. Needless to say, this did not go over well with Ethan, who for so long had been wracked with guilt over the trail of blood that forever followed in his wake.

‘FLINT IS THE HEART OF THE WORLD’ | While the Creature dreamt of returning his family to their old home, maybe even visiting the highlands, it wasn’t to be: At the start of Episode 2, Jack finally succumbed to his long illness. Just as heartbreaking — possibly even more so? — Marjorie didn’t want the boy buried. No, she ordered her husband to take his body to Dr. Frankenstein for reanimation. If the Creature couldn’t come back with Jack as he was, then he shouldn’t come back at all, she added. Unable to allow his son to be turned into another “grisly, undead thing,” the Creature carried Jack’s body into the sea and released him. 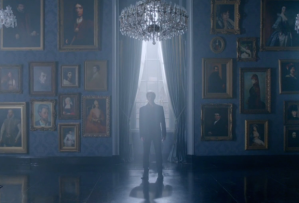 ‘I’LL ALWAYS BE HERE’ | Returning to Dorian’s, Lily was saddened to discover that the result of her glorious endeavor was merely “one more dead child” — Justine. Dorian assured the former Brona Croft that an uncaring, passionless existence such as his — and such as hers could be — was a small price to pay to be as perfect and unchanging as the portraits hanging from his walls. “I hope they watch over you,” she said before leaving to pursue a different kind of life. “You’ll be back,” he predicted (incorrectly, it was clear), “and I’ll be here.”

In bedlam, Victor had just learned from Henry that Jekyll’s father had died and left him both the estate and title (making him Lord Hyde) when Frankenstein ran into Sir Malcolm, Dr. Seward and Catriona, who’d found out from inpatient Renfield that Dracula had Vanessa at the slaughterhouse. (Yes, I know that was a lot of information to pack into one sentence. We’re working up to some big stuff, people! We don’t have time to waste!) The upshot: The foursome would rendezvous with Ethan and Kaetenay at vampire HQ.

‘SHE’S NOT YOURS, SHE’S MINE’ | Before entering Dracula’s lair, Ethan and Kaetenay separated from the group to take an underground approach, and Sir Malcolm warned Dr. Seward that they wouldn’t be able to look out for her inside. “I’m a New Yorker,” she replied. “We know our way around random gunplay.” Once Dracula had introduced “all the children of the mother of evil,” he invited the unwelcome guests to leave — alive, per Vanessa’s wishes. And they might have, had Sir Malcolm not asked why the vampire had turned his beloved Mina. She was just a way to get to Vanessa, he explained. “Although her flesh was sweet, and I enjoyed her.”

At that, Sir Malcolm told Victor, Dr. Seward and Catriona to leave. “We’re all doomed in this place,” he said. “Makes a change for a Tuesday, though,” cracked Catriona. Drs. Frankenstein and Seward weren’t going anywhere, either. The latter was especially underwhelmed by Dracula. “F— him,” spat the shrink. So, as soon as Sir Malcolm took a shot at “Alexander,” all hell broke loose, with the foursome engaging in a spectacular — and spectacularly bloody — battle with the vampire’s familiars. When at last our heroes were surrounded, Ethan and Kaetenay burst in from below to bail them out! 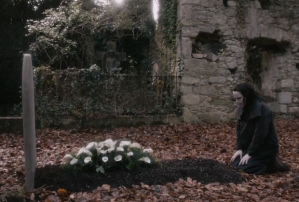 ‘WITH A KISS… ’ | Determined to keep Ethan from reaching Vanessa, Dracula attacked him. So, one by one, Sir Malcolm, Victor, Dr. Seward and Catriona intervened, giving the werewolf a chance to sneak away and find Miss Ives. Once he had, she admitted, “It hurts more than I thought it would, seeing you.” Still, she could not leave with him. “My battle must end,” she knew, “or there will never be peace on earth.” Putting Ethan’s pistol in his hand, she kissed him, and together, they recited the Lord’s prayer before he shot her. “Oh, Ethan,” she said with her dying breath, “I see our Lord.” And just like that, she was gone.

When Ethan carried Vanessa’s body into the main room, Dracula gave up throttling Sir Malcolm and disappeared. Later, at Murray mansion, Sir Malcolm confessed to Ethan, “Never have I so wanted to run away.” He wasn’t going to, however. He was going to stay put and figure out who he was without Vanessa. And Ethan? He would stick around, too. After all, he told Sir Malcolm, “You’re my family.” The following day, an unseen guest attended Vanessa’s funeral: her dearest friend, the Creature.

So, what did you think of the season finale? And what do you make of “The End” title card that flashed as “The Blessed Dark” concluded? (For the record, at press time, Showtime has yet to renew Penny Dreadful for a fourth season.) Grade the episodes below, then hit the comments with your theories.