The Fosters will depict an all-too-familiar scenario in Monday’s Season 4 premiere (Freeform, 8/7c) when a potential shooter puts the Anchor Beach campus on high alert.

The family drama’s writing team did exhaustive research in preparation for the harrowing episode, which finds Mariana fending for herself as the police search for her boyfriend and possible gunman Nick.

The storyline is especially timely as the country reels from last week’s Orlando nightclub massacre. But the frequency of mass shootings in America makes it an important issue to explore at any time, executive producer Bradley Bredeweg maintains in the following interview. Also in the Q&A, the EP previews the fallout of Callie’s big revelation, Mariana’s plight and more.

TVLINE | What are the characters dealing with during the school lockdown?
It’s a very scary situation for everyone, as well as our family. When we last left off, we saw Nick in the car right in front of the school, and he does walk onto campus. So it’s all hands on deck. It’s something no one wants to see, especially on a school campus. But, unfortunately, it is a reality in this day and age.

TVLINE | This episode was crafted a while ago, but, in light of recent events, has it taken on an added significance for you?
It really has. Orlando, obviously, is one of the most tragic things that has ever happened in this country. So this episode is very timely. Unfortunately, I feel like this episode is timely no matter what point we’re at in this country. That’s why it’s so important for us to explore the subject matter on the show.

TVLINE | In your research for this episode, what was the most surprising thing you learned?
Just the statistics of how often this happens and how it’s become a normal part of every teacher’s training process. It’s almost unimaginable. But it is now a big part of what teachers have to go through in order to teach a class. That breaks my heart.

TVLINE | Is there a particular character that is really hit hard by this event?
All of them are very affected by it, but at the center of this is Mariana. She’s faced with Nick and the struggles that they’ve been going through. She’s the one that is left out of the classroom. She’s the one that has been locked out, and that’s part of the protocol. Once you lock the door to your classroom, you are not to open it for anyone until a SWAT team or a member of the police force arrive. So it is a very scary situation for Mariana, because she has no one. She is truly locked out during the lockdown. 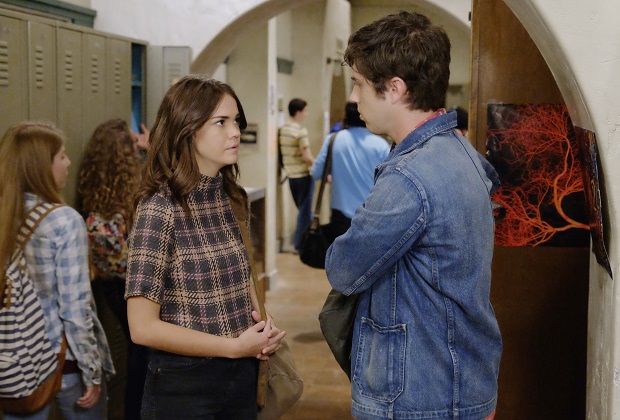 TVLINE | One of the other big cliffhangers from last season’s finale was Callie telling the moms the truth about her and Brandon. How does that play into the premiere, which already has so much on its plate?
It is a big storyline. It is super important. When we first come into the premiere episode, we are dealing with that. Callie is sitting in Lena’s office and confronting the moms and coming forward with truths and telling them what really happened. It’s a pretty heartbreaking moment.