But, since this is the show where producers were responsible for causing a contestant to commit suicide, incoming boss Coleman must be at least slightly damaged, right?

“I think he is a good guy,” Michael Rady says of his documentary filmmaker. “He knows which way is north. He has a good moral compass. And he trusts his instincts.”

All of which will cause friction between the EP and Head Bitch in Charge Quinn, the actor reveals below. He also previews the growing “spark” between Coleman and Rachel in Season 2 (airing Mondays at 10/9c on Lifetime).

TVLINE | What was your familiarity with the show before you got this role?
When I was auditioning for it, I knew nothing about it, and I was in the hallway outside the casting office, waiting to go in for it and trying to YouTube it. I figured there would be scenes or clips, but there was really nothing except for montages that fans have put together. So I saw a Rachel/Adam montage. I remember, they’re like, “Michael, you’re on deck. You’ll have to go in in one second,” and I’m, “OK, thank you,” and I’m watching this clip, and then it shows this guy having sex with a woman bent over, with two guys watching, and then Rachel’s watching at the door! “What is this show?! I thought this was on Lifetime! What is this?” [Laughs] I got the part, and then I sat down and watched it, and obviously, I couldn’t believe I was part of the show. I’m glad I didn’t know anything about it beforehand, or I would have been so terribly nervous for the whole audition process and the chemistry read [with Shiri Appleby].

TVLINE | Why would someone with a respected career as a documentarian go work for a show like Everlasting?
Opportunity. I think Coleman is a truth-seeker. He is more of an artist than someone who is involved in that world might be, and he is interested in learning. It also could just be a great business opportunity for money. I don’t think it’s one exact answer. It’s several factors that help him decide to land there.

TVLINE | Coleman sided with Chet’s version of the show. Does that cause problems for him when it comes to Rachel and Quinn?
Yes, it absolutely does not win them over. When Coleman chose Chet, that pretty much set the tone for Quinn and Coleman’s relationship for the rest of the season, and Coleman’s OK with that.

TVLINE | Shiri Appleby told me that Coleman seems like someone who might be able to stand up to Quinn. Do you feel like he’s on her level?
Yes, I do. Coleman is very smart and savvy with human behaviors and psychology and even with the storytelling business. He comes into this situation and doesn’t bring any Everlasting history with him, so he can deal with these people at face value. It’s a very helpful perspective to be injected into the show, because frankly, these people… are doing terrible things. It’s really, really, really gratifying throughout the season to have Coleman push back at Quinn — because no one else does. Some people do, but she usually gets the last say, and I really fought to have Coleman keep pushing whenever they had those kinds of scenes together. I was always trying to fight for more little bits and points to make on the score sheet between her and him. 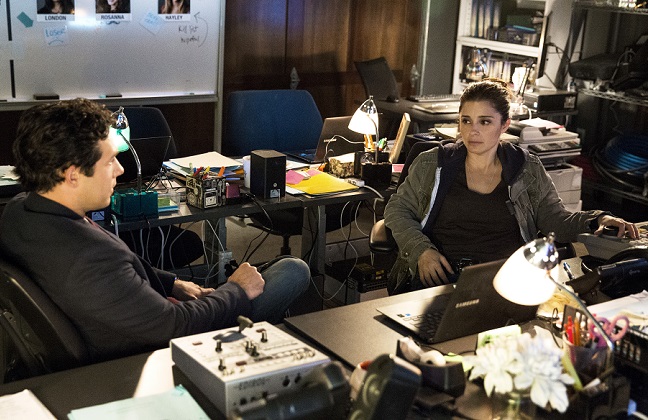 TVLINE | What is the relationship like between him and Rachel?
Coleman and Rachel hit it off pretty early on. You get the idea at the end of the second episode that there’s some kind of spark between them, certainly an attraction, and some kind of intrigue. That does start to develop and bloom into a relationship for the rest of the season. Rachel finds a partner in him that has similar wants and desires, wants to tell the same kinds of stories and wants to make the same kind of change, move the needle in a socially conscious way.

TVLINE | From your YouTube search, I know you know about Rachel and Adam. But does Coleman become aware of Rachel’s quite complicated history with the men at Everlasting – not just Adam but Jeremy, too?
Yes. So much of Rachel’s history is revealed because of my character. Season 2, it’s much darker, and you really start to peer into the deeper layers of all of these people. My character and his new perspective are part of the conduit for these revelations. Coleman has a relationship with Rachel, so you start to learn more about her past and things that make her tick.