In this week’s Outcast, it was one step forward, two steps back for Kyle: Though he met a possessed police detective who called him by the name of the series, the demon wouldn’t reveal why our hero was “special.” Frustrating, right? But that wasn’t the worst thing that happened in “All Alone Now.” What was? Read on and find out!

THE CASE OF THE WEEK | In the episode’s opening, after a demon took possession of Blake Morrow (Oz’s Lee Tergesen) while he was on a double date with partner Luke, the entity inside the cop brutally murdered his friend’s wife. Later, Luke invited Reverend Anderson and Kyle to the jailhouse in hopes of exorcising the killer. In no time, however, Anderson became convinced that this wasn’t a case of possession. “Some souls,” he said, “are capable of creating evil without the devil’s help.” 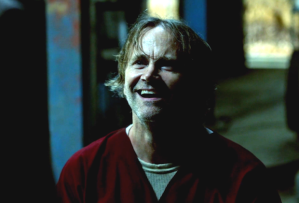 Less willing to throw in the towel so quickly, Kyle burned Blake with his touch, prompting Morrow to brand Anderson’s sidekick “outcast.” Unfortunately, rather than disclose the reason for the name-calling, Blake only taunted Kyle about the many people who’d cast him out — including Allison — and offered to stop the demons from coming to him if only he’d visit prison regularly.

From there, things only got worse. Blake guessed that Anderson was pissed that Kyle, not the preacher, had special powers; Kyle wailed on Morrow until he spit up (not quite enough) demonic bile; and after the demon hissed that Barnes would “never be free of” his kind, the reverend deduced that “whatever is in [Blake] is there to stay.”

Which was depressing enough. But then, as soon as Kyle got home, he went and knocked on Norville’s door. When his neighbor didn’t answer, Kyle let himself in and discovered the old man dead, his wrists slit. Dammit, Sidney — what did you do?!?

MEANWHILE… | In other developments, Megan was rattled by the return to town of Donny Hamill (who, from what we could glean, is an obsessed ex), and after Mark found evidence of foul play at the creepy camper (an expensive watch, a fingernail), Chief Giles suspiciously took over.

What did you think of the episode? Are you enjoying the series’ slow build, or would you prefer a quicker pace? Hit the comments.