Well, now we know one major difference between Wrecked and Lost (aside from the whole comedy vs. drama thing).

In the first part of the TBS comedy’s two-episode premiere on Tuesday, James Scott’s leading-man Liam — aka the “Jack Shephard” of the group — was flattened to death by the doomed plane’s dangling nose section. And while exec producer Justin Shipley confirms to TVLine that Liam is definitely a goner, the scribe — who co-created the Lost-leaning sitcom with brother Jordan — reveals that he briefly toyed with staging a miraculous resurrection. 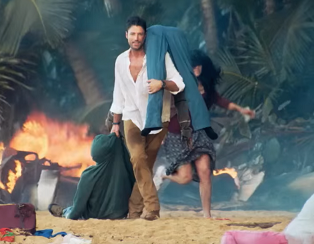 “James is amazing — he is that guy — so there was a lot of talk about Liam maybe being just that strong that he could’ve somehow survived,” Justin says of the Days of Our Lives vet. “But, ultimately, his death forces everyone else to step up and fill that void. I think it’s for the best. From the very beginning it was always, ‘Let’s take the most capable man and just murder him.'”

Per Lost lore, co-creators J.J. Abrams and Damon Lindelof initially intended to kill off Matthew Fox’s Jack in the pilot, but ABC executives balked at the idea. Was Liam’s death a subtle nod to that piece of behind-the-scenes mythology? “It wasn’t,” Justin maintains. “I always knew that trivia, but I didn’t make the connection until after we had written the script.”

Adds Jordan with a laugh: “But if it makes us sound smarter, you can say it was!”

What did you think of Wrecked? Grade the two-part premiere below and then elaborate on your selection in the comments!