If you ever found yourself watching Gossip Girl and thinking, “This show needs more murder,” or “I wish Chuck’s burlesque club was a deviant sex club,” then Freeform’s new mystery series Guilt is for you.

The premiere this week launches with the grisly killing of Molly, a free-spirited Irish student in London. There are secrets galore (Molly was pregnant when she died! Someone was stalking her!) and so many shady suspects (Rupert Giles?!) that a flowchart might be helpful. Alas, my breakdown of the key players in the potential summer guilty pleasure will have to suffice:

GRACE | Our protagonist (or is it anti-hero?) is Molly’s flatmate, a somewhat wild American student (played by The Syndicate‘s Daisy Head) who becomes the authorities’ prime person of interest. While she has an alibi – she was having sex with her boyfriend on the roof – she was also high on Ecstasy at the time. Thanks to her drug-addled brain, she can’t fully remember going downstairs to pee in the middle of the night and stepping in her friend’s blood. Also of note: She once had an affair with a professor and then slashed his wife’s tires when she found out he was married, so she has a temper. (Her convo with the prof about mourning Molly hints that the other girl may have also engaged in an inappropriate relationship with their teacher.) Following her questioning by the police, Grace decides to catch a train to Paris with her boyfriend, making her look even more suspicious. Even her own sister, lawyer Natalie (Vinyl‘s Emily Tremaine), is forced to question Grace’s innocence eventually. 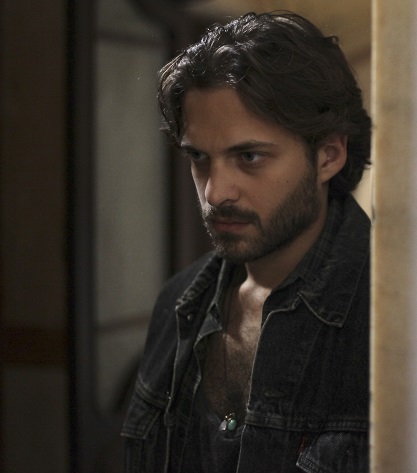 LUC | Grace’s moody, broody French beau (Crossing Lines‘ Zachary Fall) ticks all three boxes on the “I might be a murderer” questionnaire: He’s a frequent drug user, his art pieces look like splattered blood, and he’s a bit aggressive in bed. He may also have motive: He was two-timing Grace with Molly.

PRINCE THEO | Did I forget to mention that Molly worked at an underground sex club, where her DJ roommate Roz (The Casual Vacancy‘s Simona Brown) seems to be some kind of pimp? (So. Many. Secrets.) Molly was a favorite of the BDSM-loving prince (newcomer Sam Cassidy), who isn’t thrilled with her replacement.

JAMES | Grace’s American stepfather (Buffy the Vampire Slayer‘s Anthony Head) is the only “parent” she has left. He also might have been sleeping with Molly. Natalie discovers the scarf she gave him in the girl’s bedroom.

STAN | James hires the eccentric, expat defense attorney (Titanic‘s Billy Zane), who no longer practices Stateside because he peed on a judge’s dinner. Colorful attitude aside, he’s pretty good at his job and spins Grace’s train ride into a story about her 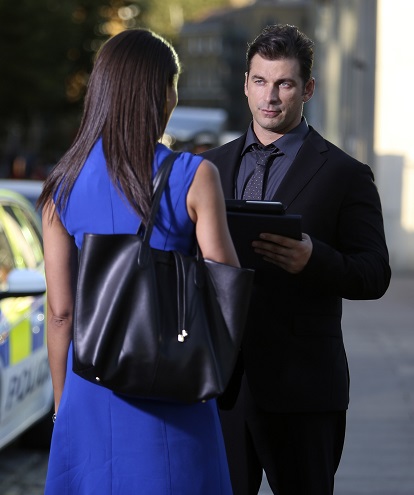 having to flee because she fears for her life.

THE AUTHORITIES | On the case are Detective Alex Bruno (Rush‘s Cristian Solimeno) and prosecutor Gwendolyn (Guardians of the Galaxy‘s Naomi Ryan), who share a combative spark. But she may have some competition for his attention, if the hint of chemistry with Natalie is any indication. Elsewhere, Molly’s angry brother Patrick (Copper‘s Kevin Ryan) is all about taking justice into his own hands.

What did you think of Guilt? Grade it via the poll, then hit the comments to back up your pick! You can also watch the pilot for free below.