No one took the obvious route and yelled “Braaaaainnnns!” during the premiere of BrainDead — not that we could hear, anyway.

Then again, given that the alien baddies in CBS’ new comic thriller from The Good Wife bosses Robert and Michelle King are the size of ants, how can we be so sure that such gleeful calls to feast weren’t simply too quiet to be detected by the political noggins into which they burrowed, leaving pink goo where grey matter once resided? 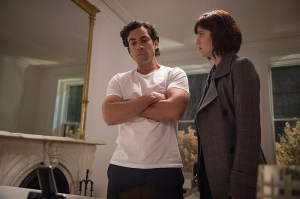 The premise resides at the corner of satire and sci-fi. Laurel (Mercy Street‘s Mary Elizabeth Winstead), wants to make documentaries about Melanesian choirs, but when her dad offers to pay off her student loans in exchange for working for/keeping tabs on her U.S. Senator brother Luke (Law & Order: SVU‘s Danny Pino), she can’t resist. Amidst the nation’s hyper-polarized political landscape, Laurel hears a constituent’s story about how her husband returned from work on a cargo ship with an altered, politically rigid personality and camera-phone footage of some sort of mysterious encounter involving a Russian crate.

We know said shipment contained a meteor-esque object that’s delivered brain-eating aliens to Earth, ones that cause people to give up alcohol, play The Cars’ 1984 hit “You Might Think” on repeat loop, slick up their hair and become completely hardcore in their political beliefs (be they Democrat or Republican). 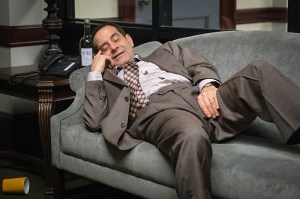 Unfortunately for Laurel, the deal she helps broker to avoid a government shutdown gets the thumbs down from her slick, slightly skeevy brother — and just as things are getting flirty with Garrett (Aaron Tveit of Graceland and Grease: Live fame), the right-hand man of a powerful Republican named Red Wheatus (Monk‘s Tony Shalhoub). Later, though, it’s Red who ups the partisan ante — after his brains get pushed out his ear and turned to pink sludge by those tiny outer-space rascals. (Did I mention Luke’s right-hand aide/mistress is also under the spell of the aliens? They’re busy little bugs!)

Things get worse for our protagonist, though, when the head scientist investigating the meteor thingy becomes the aliens’ next victim, and as he tries to resist their hostile takeover in the back of an ambulance, his head explodes all over Laurel’s face. And as Red flips a Democrat to the conservative side and Luke is pushed out of his majority-whip post, the hour ends on a symbolic note: A television left on its side as Luke’s team vacates his offices, declaring “Bipartisanship is dead.”

What did you think of BrainDead‘s series premiere? Will you be back for a second helping? Grade the hour in our poll, then sound off in the comments!