Apparently, Preacher’s Jesse never saw Spider-Man. So, unaware that with great power comes great responsibility, he let his “gift” get the better of him this week and, as a result, damn near shot someone without ever laying a finger on a gun. Who? How? Wait, what? Keep reading, and I’ll (do my best to) explain.

‘THAT’S THE DAY IT ALL TURNED BAD’ | As “The Possibilities” began, Tulip was in Houston trading her map with Dani (who turned out to be a woman) for the last known address of a fellow named Carlos. Since his betrayal on a “job” once upon a time had soured everything between Tulip and Jesse, she’d decided “someone’s gotta pay.” And by “someone,” she meant, of course, Carlos. Anyway, as soon as the exchange was made, Dani delivered the map to an unseen man (who also could turn out to be a woman, I suppose) enjoying what sounded like a snuff film. 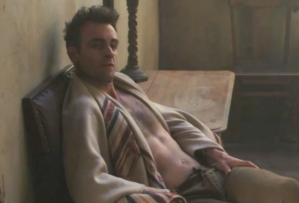 ‘IMAGINE THE POSSIBILITIES’ | Back in Annville, Emily learned from Mrs. Loach that, after Jesse visited Tracy, the catatonic girl had opened her eyes. Later, Emily went another few rounds with Cassidy, this time over taking Ted’s body to the crematorium. He was on it — very on it, he insisted. In fact, he was wearing his “very on it outfit” (pictured). But before he actually left All Saints’, the vampire happened upon Jesse, who eagerly demonstrated his superpower of suggestion. (The command “Fly!” went about as hilariously as you’d expect.) Maybe he was a Jedi, Cassidy suggested. Whatever the preacher was, he felt like there was a “blender in [his] gut” full of love, hate, fire, ice, bologna, ice cream… everything!

‘GIRLS ARE COMPLICATED’ | After Donnie reassured his son that what he sometimes heard going on in his parents’ bedroom wasn’t spousal abuse, Chris revealed that all the kids at school were laughing about the sound that Jesse had caused Donnie to make. (Sadly, it seemed like Chris was well on his way to becoming a bully, too, in defense of his father.) At work, Donnie’s day went from bad to worse: Odin didn’t want his help with interloper Jerry Cutler, he just wanted his tray taken away… which, with a broken arm, Schenck couldn’t very well manage. What good, scoffed Quincannon, is “a right-hand man with no right hand”? 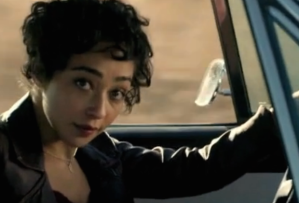 ‘THERE’S NO SUCH THING AS GOOD GUYS, THERE’S JUST GUYS’ | When Jesse ran into Tulip on her way back from Houston, he asked, “I seem different to you?” He looked like s—, she replied. But that was getting to be the norm, she added. They had more important things to discuss, however — she had Carlos’ address! Jesse protested once more that he’d promised his father he’d be one of the good guys. So what? Tulip argued. Killing Carlos wouldn’t be a crime, it would be justice! Unable to argue with that logic, Jesse was in.

‘DROP THE GUN’ | En route to Carlos’ with his ex, Jesse had the misfortune of encountering an extra ticked-off Donnie in a gas station bathroom. “Now it’s your turn to make the sound,” said Schenck, pointing his gun at the preacher. Unfortunately for the d-bag, Jesse’s power enabled him to turn the tables with remarkable ease. Exhibiting a coldness we haven’t seen in him before, the preacher instructed Donnie to put the gun in his mouth and pull back the hammer. Had Jesse not snapped out of it in the nick of time, Schenck would have blown his own teeny, tiny brains out. 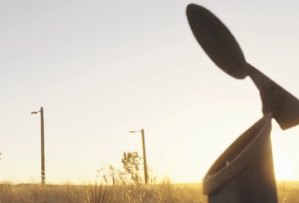 ‘JESSE IS A BLOODY WRECKING CREW’ | Off that disturbing scene, Jesse infuriated Tulip by informing her that he’d changed his mind about her revenge plot. What about Carlos? “We leave him to God,” the preacher said. Meanwhile, back in town, Cassidy spotted the duo he’d initially mistaken for vampire hunters. After running them down (and amusingly pondering whether they kept popping back up because they were clones), he learned from the pair that 1. they weren’t after him or even Jesse, just what was inside Jesse, and 2. they were from heaven. In hopes of saving the duo another ass-kicking, Cassidy offered to act as their middleman with the preacher. Speaking of whom, as the hour drew to a close, he was talking about change at Ted’s funeral just as something (the entity? merely a breeze?) blew into a… OK, I don’t honestly know what that thingy is. Anyone? I’ll run a picture of it, and we can play Name That Doohickey.

So, what did you think of the episode? My favorite parts were Cassidy’s wardrobe and any Jesse/Tulip scene. How about you? Hit the comments.