An “impressive” new adversary, new responsibilities and new faces are all a part of The Last Ship‘s Season 3 voyage (beginning Sunday at 9/8c, with a two-hour premiere).

Whereas Season 1 of the TNT action-drama chronicled the search for a cure to an apocalyptic virus, and Season 2 was about getting it to shore, the coming cycle revolves around the difficult task of ensuring that the cure gets to those who need it — especially when a global power player is out to make sure it doesn’t.

That latest wrinkle comes in the form of China’s President Peng, who apparently is withholding the cure from certain Asian nations. That reprehensible act sets the stage for chief of naval operations Tom Chandler (played by Eric Dane) to swing back into action, having acquired a certain cachet as “the man who saved the world” as captain of the Nathan James, says executive producer Steven Kane.

“Season 3 is grittier and more global in scale, but on an emotional level it’s more about the burden that Chandler faces — which is something he didn’t ask for,” says Kane. “When some troublemakers overseas threaten to hoard the cure — and maybe even cause a mutation of the virus because they don’t get the cure out there fast enough — the only person the president (Mark Moses) thinks has the moral authority to get anything done and make a difference is Chandler.”

Thing is, “Chandler doesn’t like being considered a hero, and he’s also in a state of grief over what he’s personally lost and what the country’s lost,” Kane continues. “He’s trying to remain resolute and do his duty but… it’s not easy being Superman.” (As for whether the woman who saved the world, Dr. Rachel Scott, survived her season-ending shooting or is among the aforementioned losses, producers wish not to spoil the fate of Rhona Mitra’s character.) 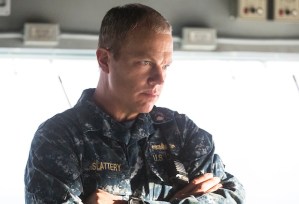 with Peng (Fernando Chien) escalates, Adam Baldwin’s Mike Slattery will learn, firsthand, that the captain’s life isn’t all cigar-chomping and admiring the horizon line. “He loses his command pretty quickly, and he and several of his shipmates go through a real crisis where they are in great danger and subjected to great torture,” Kane previews. “It’s a great arc for Slattery, because he doesn’t just rely on Chandler to save him. But he does go through some serious trials.”

Here, Kane and co-showrunner Hank Steinberg detail who and what else is new for Season 3:

NEW THREATS | Boasting a background in the Chinese Secret Service, Peng “is a strong man” says Kane, “so he uses this crisis as an opportunity to build China back to its former glory — and also to dominate his neighbors.” And while he is “a pretty impressive foe,” the EP notes, 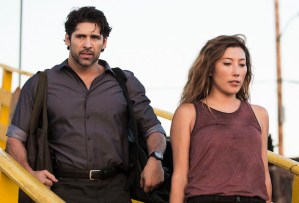 Peng is only “part of a matrix of Big Bads that you’ll meet this season.”

NEW ROLES | With Bren Foster now a series regular, Chief Petty Officer Wolf Taylor “is a major character to watch,”  Steinberg says, especially when the events of the Season 3 premiere steer him on a “vengeance quest.” Meanwhile, Marissa Neitling’s Kara, a brand-new mom via Danny (Travis Van Winkle), has moved off the Nathan James into an office job as President Michener’s deputy chief of staff. “She has a major arc this season, one that’s very different than what she’s done before.”

NEW FACES | Working above Kara is chief of staff Allison Shaw, played by Law & Order alum Elisabeth Rohm. “When we cut away from Eric Dane and Adam Baldwin, who hold the screen like nobody else, and cut back to St. Louis and the political sphere, we wanted to surround Mark Moses with really strong supporting characters,” Steinberg explains. “Moving Kara into that realm gives you a character we know and love and relate to, while putting Elisabeth there gives the world a real gravitas.” Also new to the scene is Dichen Lachman (Dollhouse) as Jesse, a freelance (and eventually needed, gulp) helicopter pilot whom Steinberg likens to “the female Tex,” possessing 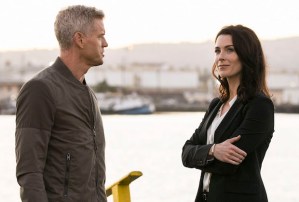 as she does “her own code, her own agenda.” (The character’s roots meanwhile tee up a “kinship” with fellow Aussie Wolf.)

The biggest addition, though, may be Bridget Regan (Marvel’s Agent Carter) as Sasha Cooper, a former Navy Intelligence Officer now operating under diplomatic cover in China for the U.S. “She represents someone from the diplomatic military intelligence world, operating in a complex theater in Asia,” says Steinberg. “She brings a whole different energy to the show, because she knew Chandler before he was in Europe, before he was married… before he was who he was.” As such, “She may be one of the only people who can stand up to him” — especially when his assertive threatens to rile the States’ already tenuous relations with Asia.