Quick, somebody slap me! I think I just felt a little pang of sympathy for Wayward Pines‘ maniacally monstrous leader Jason Higgins.

Don’t get it twisted: I didn’t put aside my disdain for the lil’ dictator because he had to choke the life out of the woman who raised him — that was a necessary evil to save the last remaining members of the human race. Rather, I wanted someone to momentarily dry his tears because Pam shot herself up with smallpox and planted a maternal kiss on his lips in the hopes that he’d be Patient X in the town’s demise. Couldn’t she have done it quick and dirty with a bomb or a fire or even a wave of Abbys?

Indeed, while “Once Upon a Time in Wayward Pines” may have been Pam’s brief comeback, it really served as Jason’s origin story. Can you imagine being raised from infancy to lead all of humanity, then having said power handed to you before you turned 20? I mean, Justin Bieber’s annoying enough — and he’s only in control of the Billboard charts and the regrettable tattoos he’s put all over his body!

It’s hard out in the post-apocalypse for a sociopath. So let’s recap the action from Season 2, Episode 3.

LET HIM STAND NEXT TO HER FIRE | As Jason reveals to Carrie that the Abbies’ retreat has him thinking about an expansion of settlements past the wall (based on Pilcher’s plan), Pam returns from exile on the outskirts of town — punishment for killing her brother on Invasion Day — and seeks his forgiveness. She plays him like one of those old-timey records the local radio station fancies, using phrases like “the evolution of a great leader,” but there’s only tepid applause when he marches his mother figure into the town square and tells everyone she’s being allowed to re-assimilate.

Of course, we soon learn that the vial Pam stole from Megan’s lab contained a strain of smallpox — and that it was part of her terrorist plot to end this grand experiment. “Wayward Pines was supposed to be the salvation of the human race!” she howls, after getting caught. But her definition of “gift” and “peaceful end” don’t conjure up the warm fuzzies among Jason, Theo, Megan or anybody within earshot. “You can let me die of smallpox — or you can kill me,” she finally realizes, once she’s been put in a quarantine facility that sort of looks like a giant iPhone case. Jason chooses the latter option, taking his “mom” to the woods for some heavy strangulation. As her body is hurled onto a bonfire on the wrong side of the tracks — I kid! There are no trains in Wayward Pines! — out pops C.J., looking forlorn. I’m pretty sure he and Pam didn’t vacation platonically in Hawaii back in the day, if I ain’t being too subtle.

FAIRYTALES CAN COME TRUE, IT CAN HAPPEN TO YOU | The hour kicks off with Pam’s voiceover, sharing a storybook version of Jason’s status as the first child of Wayward Pines. She and Pilcher recognized he was special from an early age — grooming him to one day take over as the leader of the planet’s remaining humans. Over the course of the episode, we see how that upbringing forced Jason to confront ideas of punishing/executing reluctant residents from a really young age. We also see how Megan savvily wormed her way into Jason’s inner circle/the town’s power structure before he was old enough to see her true motives. When Pam ends her tale, she admits she’d always told it to young Jason as a “fantasy of what this place should be. I never [told] you the reality or the horror.” Ultimately, though, she gives him a sad ending: As young Jason comes of age and craves a life beyond the wall, desires something more, he realizes “the more belonged to the creatures.” And it made him feel sorrow, so he closed his eyes and he wished for grace. (That’s code for “Choke the life out of mommy,” yes?)

THE DOCTOR IS IN (BETTER STANDING WITH JASON?) | Theo, meanwhile, is immediately suspicious of Pam — thanks to some freaky-tense conversations at the hospital. But his efforts to contain the smallpox outbreak score points with Jason, so it looks like he’s bought himself another couple weeks of life without possibility of being fed to Abbies. Still, dude might want to whisper his sarcastic zingers — “Well, this is festive! Who are we executing today?” — rather than blurt ’em for everybody to hear.

Pam unearths an uncomfortable truth about Theo and Rebecca: “Oh! You haven’t even reconsummated yet!” (Damn, woman!) But we also get introduced to a kernel of an idea that perhaps Rebecca wasn’t abducted, but rather chose to come to Wayward Pines. (At least that’s what I read into all those cryptic conversations between Theo/Rebecca and Theo/Pam). Oh, and Pam was in Hawaii when Rebecca and Theo were taken! Innnnteresting! Theo ends the hour by telling a sad story of only connecting with his dad after his mother’s death — and how now he’s haunted by the fact that his father spent the last years of his life wondering about Theo’s sudden disappearance. (Hey now, maybe the old fella’s in cryo down in the basement! Don’t lose hope!)

What did you think of this week’s Wayward Pines? Did you feel any sympathy for Jason? Sound off below! 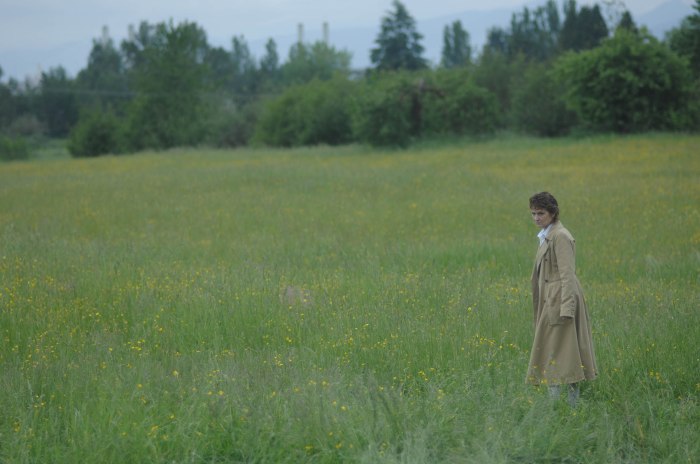